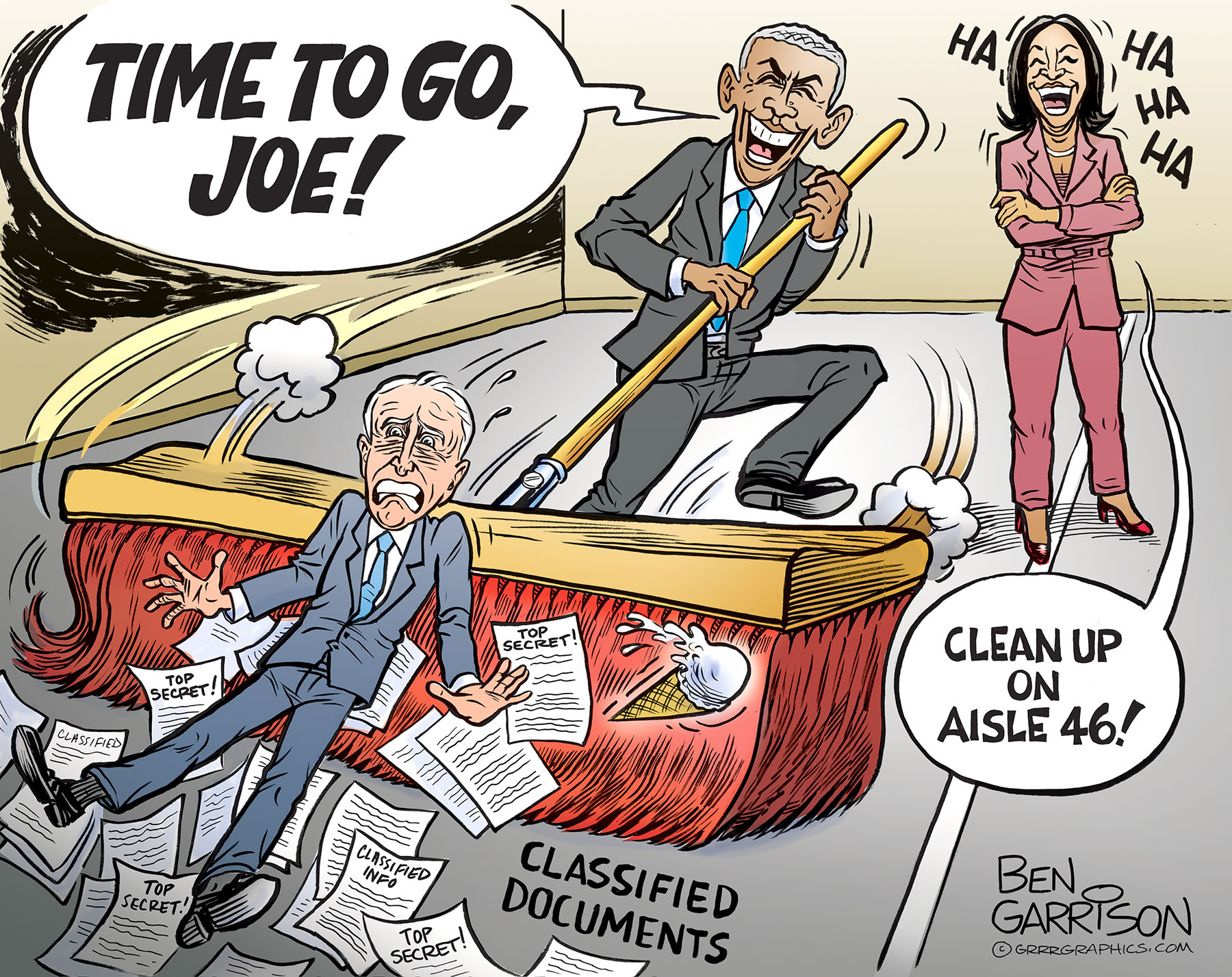 Usually such aides do their best to protect Biden. They will not turn on their boss in unless they are told to do so by a ‘bigger boss.’ Who told Biden’s aides where to find the classified documents? Who told them to release the news? We at GrrrGraphics suspect it’s Barack Obama.

Happy Birthday Rush!  Remember the Greatest voice on Radio With our Signed Print- “Talent on loan from God”

Could it be that Obama does not want Joe to run again? Biden has been a terrible embarrassment to the Democrat Party. Biden’s profound unpopularity will make his reelection far more difficult, even with the Democrats’ routine cheating. Obama might prefer that Biden get impeached or be forced to step down. Kamala would take over. Maybe Michelle Obama or Gavin Newsom will become Kamala’s VP? The very unpopular Kamala might become president, but she will not run again in 2024. Michelle Obama would. Her election would ensure Barack’s direct control of the White House. One must wonder why the FBI was not sent to attack Biden’s beach house and inspect Dr. Jill’s underwear drawer. Oh, we almost forgot. The FBI works for the Democrats. They only put on gross displays of power against Republicans.

Regardless of our speculation, this is still yet another major scandal for Biden. Joe claimed over a dozen times to have been a professor at the University of Pennsylvania. It was a lie. The University paid Biden nearly a million dollars to do nothing other than lend his name to a DC ‘think tank’ called the Penn Biden Center for Diplomacy and Global Engagement. Biden is not much of a thinker. In fact, he was widely-known as the stupidest man in the Senate. The classified documents were found in a locked closet there. Did the communist Chinese have access to those documents? Probably. After all, the University of Pennsylvania has received tens of millions of dollars from the Chicoms. Xi wants to get something for his money and China Joe likely obliged. It gets worse for Joe. On Monday it was revealed top secret intelligence documents related to Ukraine, UK and Iran were found in Joe Biden’s private office shortly before the 2022 midterm elections. Lo and behold, the mainstream legacy media are actually covering the story. Another sign that Obama and the Democrat Party are ready to throw Biden under the bus.  Of course Biden used his old ‘playing dumb’ tactic. He said he was ‘surprised’ that there were classified documents in the boxes. “I don’t know what’s in the documents,” Biden said. Yeah, right. This is a guy who lies as an involuntary reflex. On the other hand, Biden really is stupid and the ruling elite could have planted the boxes to get Joe removed from office.

Attorney General Merrick Garland must appoint a special counsel to investigate. — The GrrrTeam