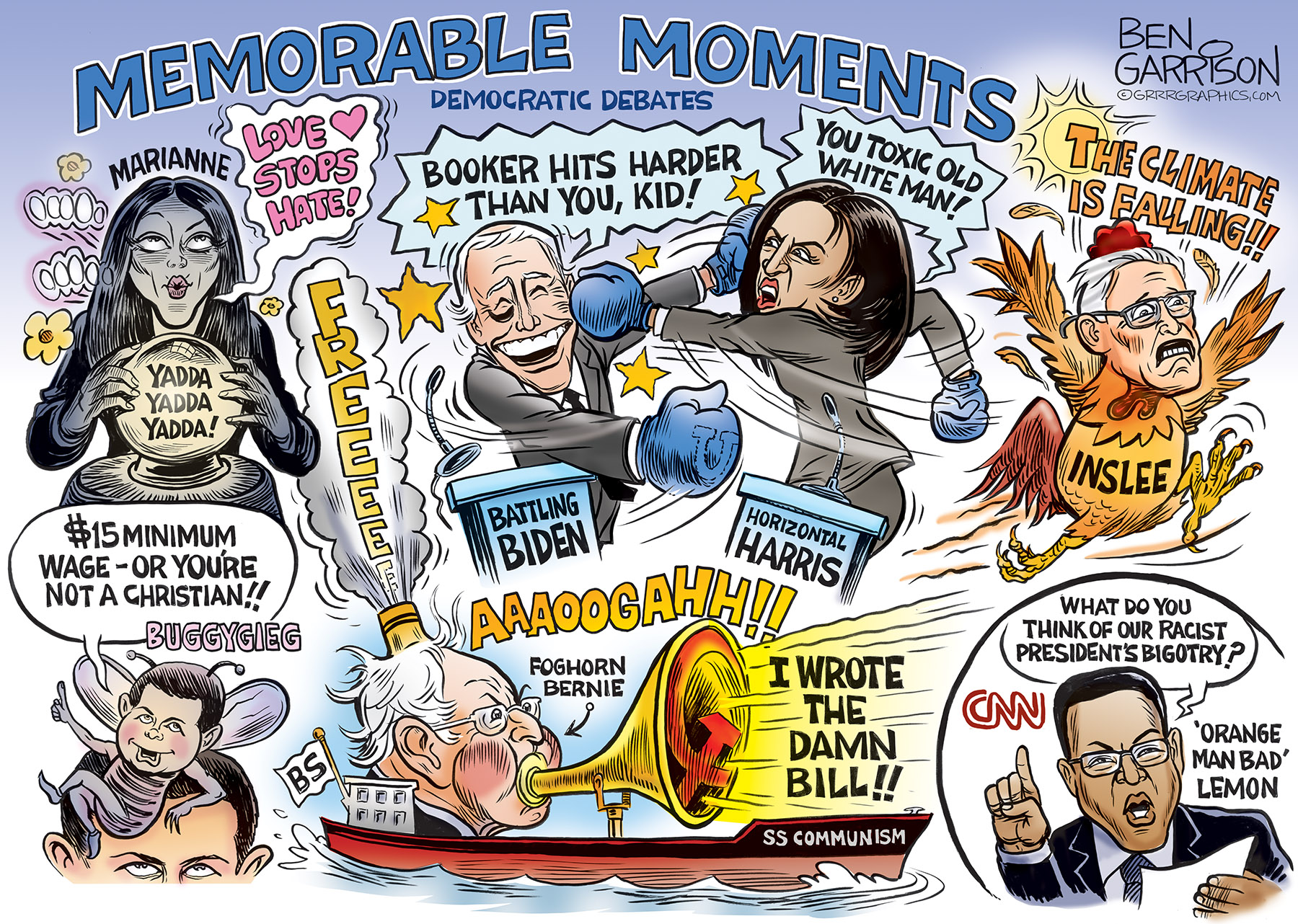 We at GrrrGraphics are glad the Democratic debates are over—for now. They caused us to laugh out loud, scoff in disgust, and shake our heads in disbelief.

We heard a lot of crazy talk and grandiose plans for America’s future that involved spending countless trillions of dollars. The so-called moderates in the debates were drowned out by the socialists, whose solutions invariably involve free stuff. Free college education and debt forgiveness. Free health care. Reparations. Free stuff for those poor families pouring over our open borders. The far left consider the U.S. government to be God. They think it’s there to solve all problems and human suffering—no matter where it occurs in the world. All the sufferers have to do is come here and be blessed by an all-giving government.

Order your signed print today- on sale for a limited time!

There were a few amusing moments. Bernie Sanders sounded like a crotchety old man who wants kids off of his socialist lawn. He substituted outright yelling for reasoned debate. Buttigieg, who sported a smashed bug on his forehead, equated paying taxes with paying for health insurance. His statement was a false equivalency. Government is very inefficient and since money can be printed up willy nilly, bureaucracies will pay higher and higher prices. After all, it’s someone else’s money. Free health care means long lines because there is always over whelming demand for free stuff. The quality of the “free stuff” always declines. Anyone in the world can fill the emergency rooms and they will. It will end up meaning very poor quality health care.

Buttigieg also put down Christians—telling them they’re sinners if they don’t support a $15 minimum wage. The problem with that is jobs will go away as a result—millions of them. But heck, we can’t expect a Rhodes scholar to think these things through.

We heard Marianne Williamson talk about ‘dark psychic forces’ and the usual new age yadda yadda yadda. At least she stood out. Jay Inslee kept harping about climate change and even said our houses were burning down RIGHT NOW! What is the solution to this end-of-the-world problem? Why, the Green New Deal, of course. More taxes, globalist rules and regulations and no car travel. Presumably Inslee would allow exemptions for China, one of the world’s biggest polluters. Maybe he’s afraid to include China out of fear of being called a racist. The ‘R’ word is more fearful than climate change.

Then we saw lesser candidates try to take down the aging king of the Capitol Hill, Biden. There were some interesting verbal boxing matches between Biden, Booker, and Harris. Biden survived.

I didn’t include the other frontrunner, Elizabeth Warren. The hectoring schoolteacher came across shriller than feisty and more annoying than likable. Listening to her is like getting slapped on the hand by a ruler.

All of them insulted our president at every turn. Inslee called Trump a ‘white nationalist.’ Trump is white and believes in America first, which makes him a nationalist. To the loopy Democrats, it means he’s Hitler. Shame on Don Lemon for framing his questions with insults aimed at the president. He made his slurs sound like facts. Lemon is neither a moderator nor a journalist. 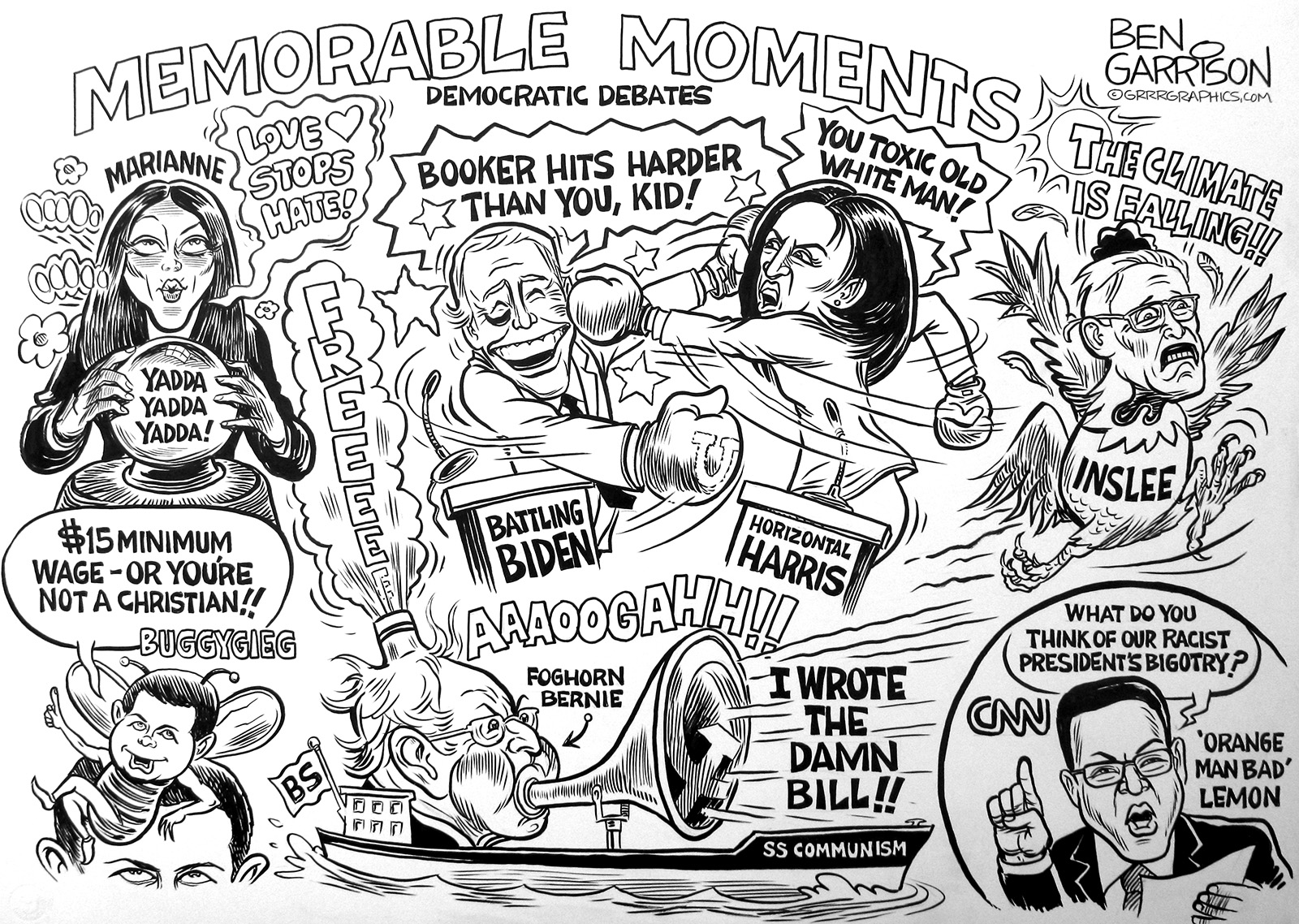