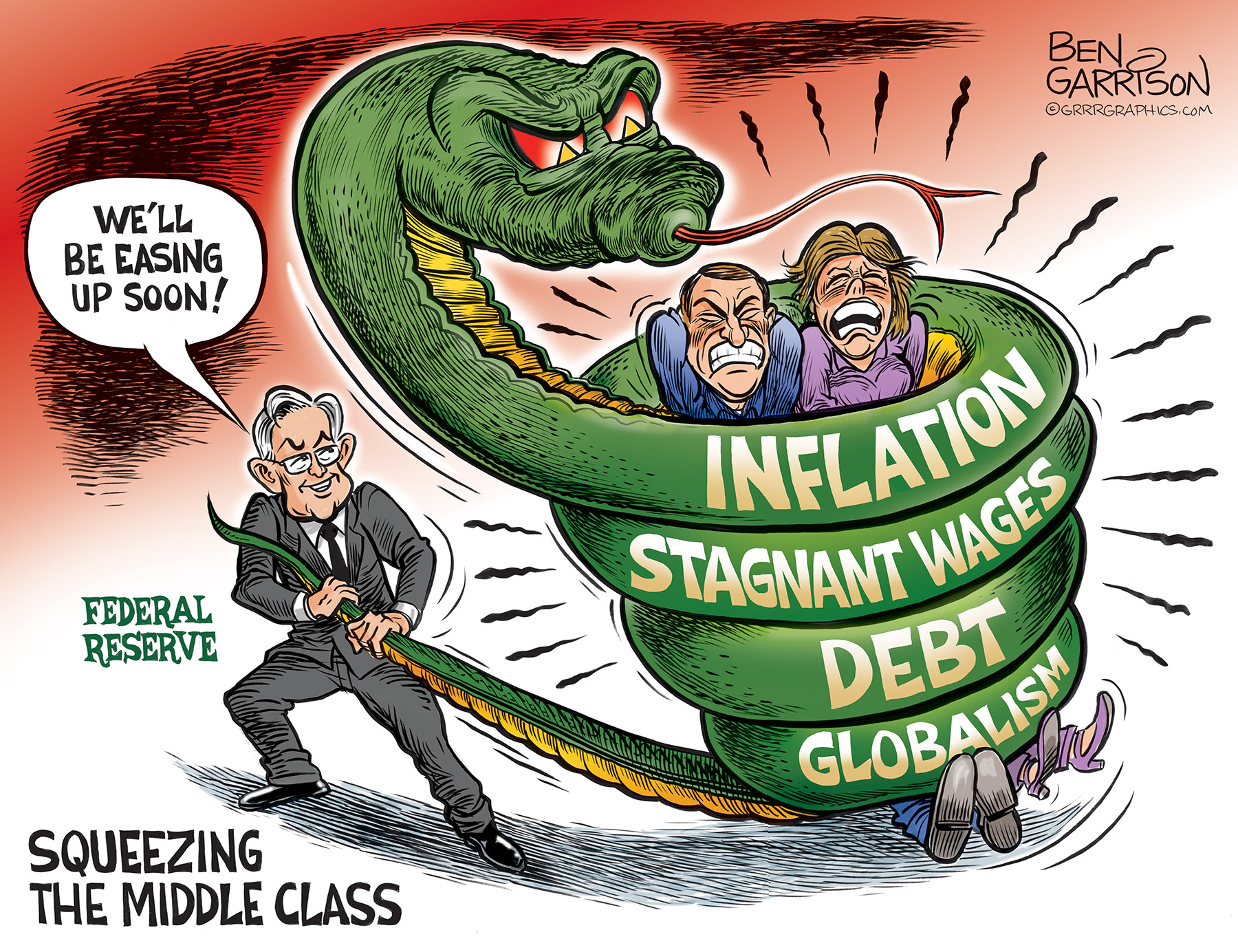 President Trump complained that we have a ’strong dollar and a weak Fed.’ He added that Jerome Powell did nothing at the recent economic summit that took place in Jackson Hole, Wyoming. He wants them to lower rates even further. He needs to push them all the way and end the Fed.

The Fed may talk about further easing, but they really can’t play that hand. If they do, they’ll be out of alternatives if a recession really does sink in. Then again, there’s not much they can do, anyway. They’re pushing on a string. Their system was supposed to prevent booms and busts. Instead, it has caused them.

Fight Back against Fake News! Support Cartoons that shred the Globalist Narrative! Click to Donate

Trump once expressed some interest in auditing the Fed. That possibility is one of the main reasons I continue to support him. For over a century, our Republic has endured the abuses by a rogue Federal Reserve, which is neither Federal nor a Reserve. It’s a private corporation that took over the issuance of our currency and they do so for the benefit of their private, globalist shareholders. When Bernie Sanders questioned Bernanke just over 10 years ago about the who received the trillions of dollars in bank bailout money, Bernanke said ’No.’ He flat out refused to tell Congress where the money went. The Fed usually uses the excuse about how important it is to maintain their ‘independence.’ Independence from what? The Constitution? Congress? The rule of law? They are not part of America–and they are lawless!

Bernanke wasn’t arrested for contempt of Congress. The money was sent to bail out foreign banks and we tax slaves were expected to pay the bill without complaint, as if the Federal Reserve were engaged in some sort of heroic economic action. Wrong. They were engaged in the biggest theft in human history, and they’re still stealing today.

ToonTroops Join us on Patron! We Haven’t Been Banned Yet!

The middle class in America continues to wane, thanks to our corrupt system of debt money. Inflation steals savings while wages have continued to stagnate, decade after decade. Quantitative easing hasn’t helped the middle class—that has gone into the pockets of global banks and corporations and they buy back their own stock with that money—thereby propping up the stock market. Most Americans, including the middle class can’t afford stocks. What of the traditional families that remain? These days, both the husband and wife must work just to make ends meet. Often one of them must take on two jobs. Their children suffer. Being able to afford the cost of living in major cities is becoming more difficult. Those that try and fail end up homeless. They take drugs to numb the pain of hopelessness. Jobs that pay decent wages are on the wane, and a lot of those jobs were sent overseas—especially to China. Trump is trying to push back against that, too.

We have a ridiculous $22 trillion debt thanks to the con game played by the Federal Reserve. We have an abusive IRS ready to throw citizens in prison if they don’t slave away 5 months out of a year to pay their taxes—and interest on that debt, which will never be paid off because We The People don’t have our own printing press to do it. The Fed can counterfeit—but for us it’s a crime. We have become slaves to the central bankers.

There’s no reason why we shouldn’t end the Federal Reserve. If we don’t get back on a gold standard, we can at least issue our own money and make it debt free. Make the Federal Reserve pay back to taxpayers all the money they’ve stolen. This is  the real reparation that needs to be paid—and it would put money back into the middle class hands—the same hands that worked hard to earn it in the first place.

Historic Ben Garrison Original Art- Reserve your piece of History in the age of Trump! Click to view!