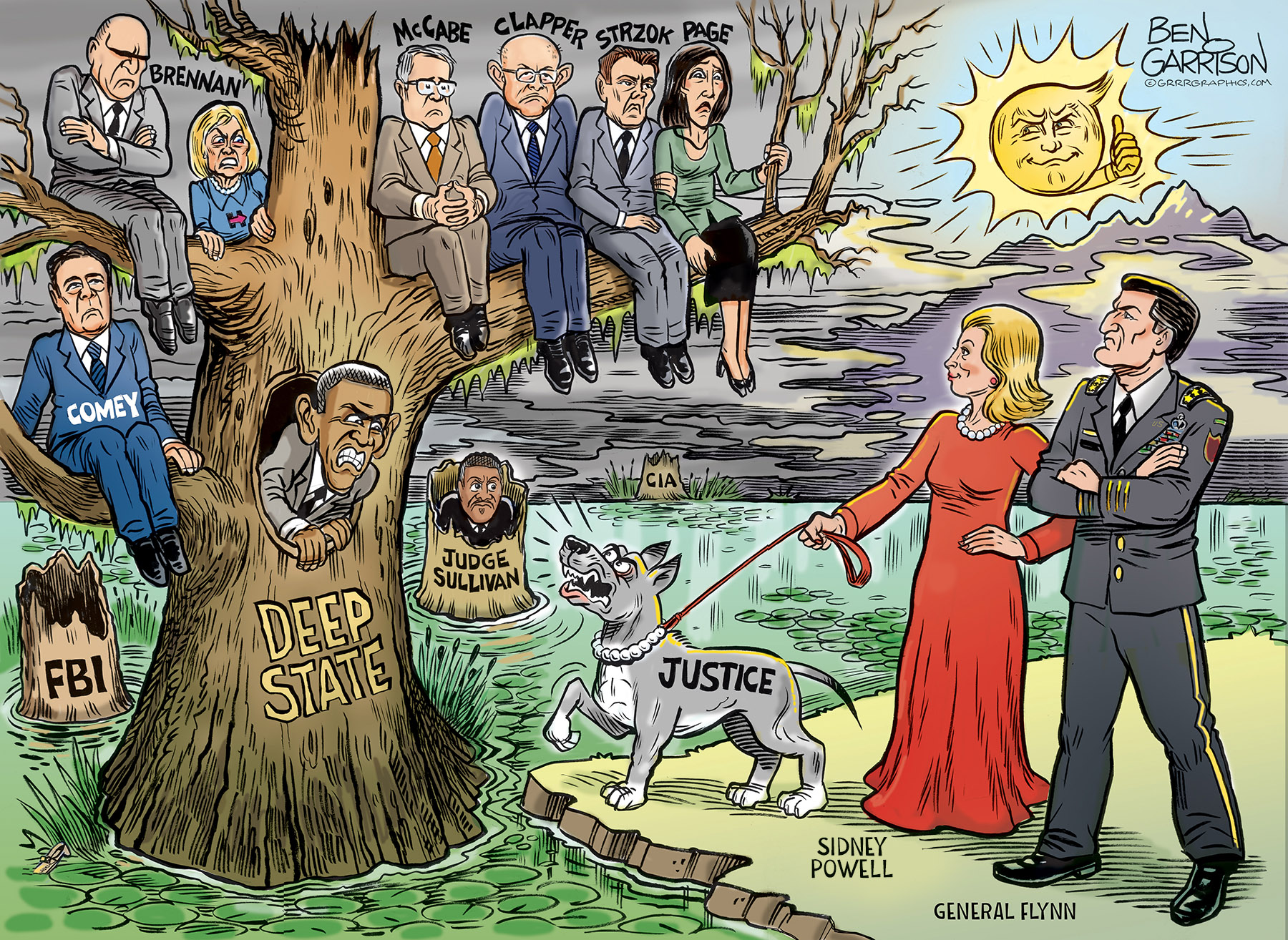 Sidney Powell is a lawyer doing stellar work as our nation’s number one MAGA lawyer. She has helped General Flynn with his case involving a politicized and corrupt Justice Department. Her book, “Licensed to Lie,” is must reading for all Americans. Sidney was kind enough to send us a signed copy and it’s riveting reading. She’s a very smart and courageous watchdog who has been doing a great job at exposing the corruption among ambitious, power-seeking federal prosecutors.

The Deep State Swamp is being exposed by warriors like Sidney Powell.

Her book is available at Amazon!

Re: Your Failure to Find Precedent for Flynn Dismissal

Regarding the decision of the Department of Justice to dismiss charges against General Flynn, in your recent call with your alumni, you expressed great concern: “there is no precedent that anybody can find for someone who has been charged with perjury just getting off scot-free. That’s the kind of stuff where you begin to get worried that basic — not just institutional norms — but our basic understanding of rule of law is at risk.”

Here is some help—if truth and precedent represent your true concern. Your statement is entirely false. However, it does explain the damage to the Rule of Law throughout your administration.

First, General Flynn was not charged with perjury—which requires a material false statement made under oath with intent to deceive.1A perjury prosecution would have been appropriate and the Rule of Law applied if the Justice Department prosecuted your former FBI Deputy Director Andrew McCabe for his multiple lies under oath in an investigation of a leak only he knew he caused.

McCabe lied under oath in fully recorded and transcribed interviews with the Inspector General for the DOJ. He was informed of the purpose of the interview, and he had had the benefit of counsel. He knew he was the leaker. McCabe even lied about lying. He lied to his own agents—which sent them on a “wild-goose-chase”—thereby making his lies “material” and an obstruction of justice. Yet, remarkably, Attorney General Barr declined to prosecute McCabe for these offenses.

Applying the Rule of Law, after declining McCabe’s perjury prosecution, required the Justice Department to dismiss the prosecution of General Flynn who was not warned, not under oath, had no counsel, and whose statements were not only not recorded, but were created as false by FBI agentswho falsified the 302.

Second, it would seem your “wingman” Eric Holder is missing a step these days at Covington & Burling LLP. Indelibly marked in his memory (and one might think, yours) should be his Motion to Dismiss the multi-count jury verdict of guilty and the entire case against former United States Senator Ted Stevens. Within weeks of Mr. Holder becoming Attorney General, he moved to dismiss the Stevens prosecution in the interest of justice for the same reasons the Justice Department did against General Flynn—egregious misconduct by prosecutors who hid exculpatory evidence and concocted purported crimes.

As horrifying as the facts of the Stevens case were, they pale in comparison to the targeted setup, framing, and prosecution of a newly elected President’s National Security Advisor and the shocking facts that surround it. This case was an assault on the heart of liberty— our cherished system of self-government, the right of citizens to choose their President, and the hallowed peaceful transition of power.

Third, the inability of anyone in your alumni association to find “anybody who has been charged [with anything] just getting off scot-free” would be laughable were it not so pathetic.

Many of your alum feature prominently in the non-fiction legal thriller published in 2014: Licensed to Lie: Exposing Corruption in the Department of Justice. A national best- seller, it focusses on the egregious prosecutorial misconduct of your longest serving White House Counsel, Kathryn Ruemmler; your counter-terrorism advisor Lisa Monaco; Loretta Lynch’s DAG for the Criminal Division Leslie Caldwell; and Mueller protégé Andrew Weissmann. While they worked as federal prosecutors on the Enron Task Force—under the purported supervision of Christopher Wray—they destroyed Arthur Andersen LLP and its 85,000 jobs; sent four Merrill Lynch executives to prison on an indictment that criminalized an innocent business transaction while they hid the evidence that showed those defendants were innocent for six years. Both cases were reversed on appeal for their over-criminalization and misconduct. Indeed, Andersen was reversed by a unanimous Supreme Court.

Fourth, even if your many alumni don’t remember multiple cases that had to be reversed or dismissed for their own misconduct, Judge Emmet Sullivan should remember dismissing the corrupted case against Ted Stevens. Judge Sullivan is the judicial hero of Licensed to Lie. It is that case that caused Judge Sullivan to enter the strong Brady order the Mueller and D.C. career prosecutors violated repeatedly in the Flynn prosecution.

Fifth, there is precedent for guilty pleas being vacated. Your alumni Weissmann and Ruemmler are no strangers to such reversals. At least two guilty pleas they coerced by threats against defendants in Houston had to be thrown out—again for reasons like those here. The defendants “got off scot-free” because—like General Flynn—your alumni had concocted the charges and terrorized the defendants into pleading guilty to “offenses” that were not crimes. Andersen partner David Duncaneven testified for the government against Andersen in its trial, but his plea had to be vacated. Enron Broadband defendant Christopher Calger had his plea vacated. There are many others across the country.

Sixth, should further edification be necessary, see Why Innocent People Plead Guilty, written in 2014 by federal Judge Jed Rakoff (a Clinton appointee). Abusive prosecutors force innocent people to plead guilty with painful frequency. The Mueller special counsel operation led by Andrew Weissmann and Weissmann “wannabes” specializes in prosecutorial terrorist tactics repulsive to everything “justice” is supposed to mean. These tactics are designed to intimidate their targets into pleading guilty—while punishing them and their families with the process itself and financial ruin.

Most important, General Flynn was honest with the FBI agents. They knew he was—and briefed that to McCabe and others three different times. At McCabe’s directions, Agent Strzok and McCabe’s “Special Counsel” Lisa Page, altered the 302 to create statements Weissmann, Mueller, Van Grack, and Zainab Ahmad could assert were false. Only the FBI agents lied—and falsified documents. The crimes are theirs alone.

Seventh, the D.C. circuit in which you reside vacated a Section 1001 case for a legal failure much less egregious than those in General Flynn’s case. United States v. Safavian, 528 F.3d 957 (D.C. Cir. 2008). Safavian sought advice from his agency’s ethics board and did not give them all the relevant info. The jury convicted him on the theory it was a 1001 violation to conceal the information from the government ethics board. The court disagreed: “As Safavian argues and as the government agrees, there must be a legal duty to disclose in order for there to be a concealment offense in violation of § 1001(a)(1), yet the government failed to identify a legal disclosure duty except by reference to vague standards of conduct for government employees.” General Flynn did not even know he was the subject of an investigation—and in truth, he was not. The only crimes here were by your alumni in the FBI, White House, intelligence community, and Justice Department.

These are just a few obvious and well-known examples to those paying any attention to criminal justice issues.

Finally, the “leaked” comments from your alumni call further evinces your obsession with destroying a distinguished veteran of the United States Army who has defended the Constitution and this country “from all enemies, foreign and domestic,” with the highest honor for thirty-three years. He and many others will continue to do so.

1As a “constitutional lawyer,” surely you recall that perjury (or false statements) also requires intent to deceive. In Bronston v. United States, 409 U.S. 352 (1973), the Supreme Court reversed a conviction of perjury. In Bronston, the defendant’s answer was a truthful statement, but not directly responsive to the question and ultimately misled federal authorities. The Court determined: “A jury should not be permitted to engage in conjecture whether an unresponsive answer, true and complete on its face, was intended to mislead or divert the examiner; the state of mind of the witness is relevant only to the extent that it bears on whether “he does not believe [his answer] to be true.” To hold otherwise would be to inject a new and confusing element into the adversary testimonial system we know.” Id. at 359. The FBI agents who interviewed General Flynn specifically noted that his answers were true or he believed his answers to be true—completely defeating criminal intent. Furthermore, General Flynn knew and remarked they had transcripts of his conversations.