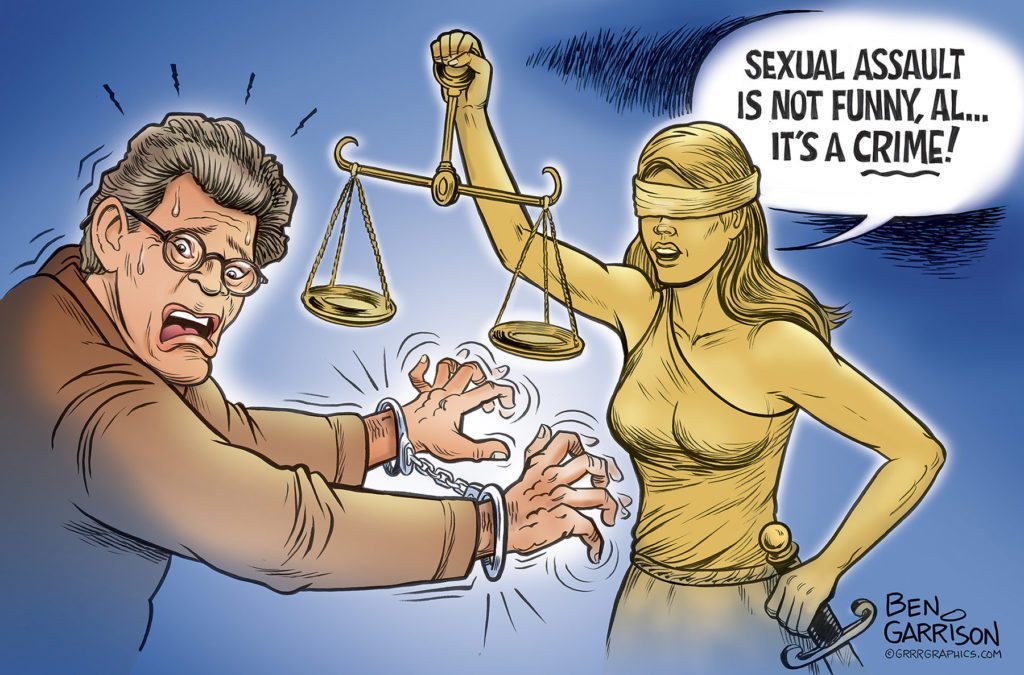 Predictably, many leftist personalities have dismissed Al Franken’s sexual assault as a bad joke–and nothing compared with Trump’s transgressions. Only they have no proof of Trump’s wrongdoings. Photographic evidence proves Franken’s creepy escapade.

To be sure, humans have always had problems with things going too far when it comes to sexual attraction. Men in particular are aggressive and it leads to boundaries being pushed. A lot of the actions can be considered ’sin’ and not necessarily a crime, but sexual assault is criminal.

In Franken’s case, his target was an attractive model, Leeann Tweeden, who once posed for “Playboy.” He wrote her into a comedy skit in which he made sure he got to kiss her. He insisted on a rehearsal. She said ‘no’ repeatedly, but Franken was adamant. He took advantage of her during the practice kiss and forced his tongue into her mouth against her will. Sexual harassment is not considered a crime, but sexual assault involves forceful physical contact.

There’s a bigger picture here. We are now subjected to an almost daily exposé parade of people who engaged in sexual harassment and assault. Harvey Weinstein, Kevin Spacey, Bill Cosby, and Bill Clinton got away with their assaults for years.

We’re now in a post-sexual revolution era. Who knows—maybe we’ll return to a Victorian-like time when men tipped their hats to a woman instead of making crude sexual advances. Maybe it’s better if we don’t know everyone’s sordid sexual behavior. Straight, gay or trans-whatever, maybe it all needs to go back into the bedroom. But first, the pedophile ring at the top must be exposed.