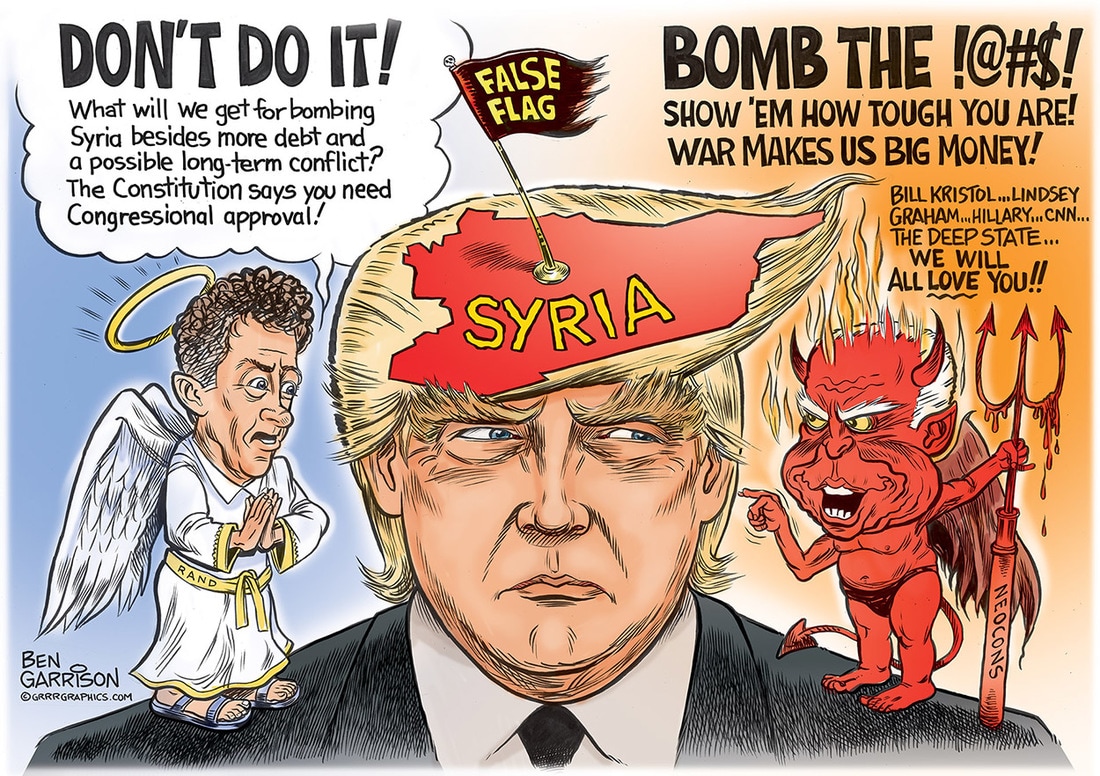 There’s just no way around it. Trump’s action in Syria disappointed me greatly. Before he was elected he claimed he didn’t want to be the world’s policeman. He wasn’t going to be ‘president of the world.’ My cartoon has Rand repeating Trump’s words to Obama.

Did Trump forget his own advice? Apparently. He just bombed Syria to punish Assad, who almost certainly did not use poison gas on civilians as the mainstream media claims. Why would Assad make such a drastic mistake? More likely, it was poison gas held by ISIS in a nearby warehouse. They probably got it from our ally who loves to fund radical Islam: Saudi Arabia.

Lies and false flags are now routinely used to draw us into war and strip us of our liberties. The gassing strikes me as an excuse to distract from the Rice scandal as well as get Trump to get more aggressive toward Russia. It’s a bad sign when warmongering Neocons such as McCain are praising the bombing. Even CNN applauded it. A very bad sign indeed. They wanted Hillary who would be more than happy to carry out their endless wars. She enjoys a good cackle after killing people.

President Trump, we did not elect you to carry on status quo policies that include even more useless wars in the middle east and the lies used to start them. We especially don’t want WWIII with Russia. We don’t need another cold war with them either. They should be our allies in the war against Muslim terrorism.

Why can’t we concentrate on our own problems? We need to rebuild our infrastructure. We need more jobs and less taxes. We need to end Obama care. We need to build that wall. We need to wrest power away from the deep state and return it to We The People. President Trump, forget about bombing the middle east. Stop trying to control the world. Instead, please concentrate on making America great again.

“The Election Collection” Ben Garrison’s cartoon wrap up of the 2016 Election Order Now!