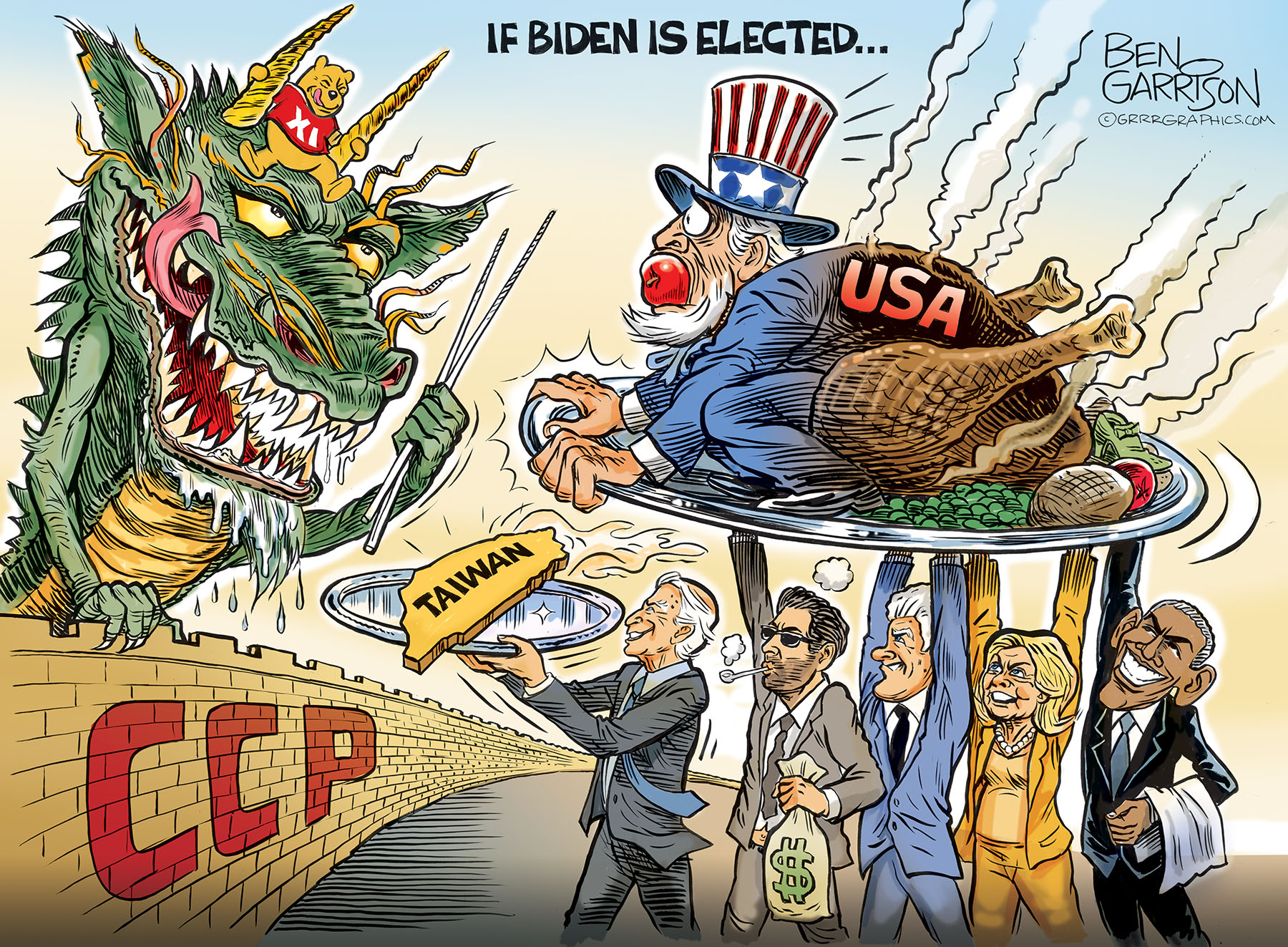 Are You Prepared for China Joe Biden’s America If He Is Elected?

This shows what could happen to America (and Taiwan) if Biden wins. He will do the bidding of the Chicoms. He and his ne’er do-well son Hunter have been purchased by them, but it goes back further than Joe. Obama worked in the best interests of China and so did the Clintons. They were clearly bribed with campaign cash and China got what it wanted from the traitors, including missile technology and U.S. manufacturing jobs through agreements such as NAFTA.China, like other globo-socialists, wants to see America destroyed from within. Our education system teaches socialism in public schools. They teach kids that America is racist, unfair, unequal, and without social justice. They teach our children that America’s history is shameful and sordid. They teach kids what to think, not how to think.

Urgent- We need your support! Help Us stop the steal of the 2020 election- support cartoons todayOur military was greatly weakened by Obama. He fired many generals and ranking officers and replaced them with people willing to fire upon Americans. As Obama’s vice president, Biden praised the Chicoms. In a speech he stated, “Let me be clear. A rising China is a positive development not only for the people of China, but for the United States and the world as a whole.” He also said China could become a ’new partner’ with whom we could meet global challenges together. In other words, China and the Democrats would work together in their quest to bring about a globalist, socialist system. Nationalism was being replaced by globalism and not just under the Democrats. The Bushes also wanted globalism—a ’new world order.’ No wonder the Bush family voted for Hillary instead of Trump. China wants control over the world by controlling the UN and now the United States.

Support ULTRA MAGA Cartoons with a One time donation! Click to Donate!Sleepy Joe recently talked tough about Xi, but that’s mere posturing for the election. Google promotes Joe’s tough talk while accusing Trump of being weak on China. It’s an inversion of the truth. Trump is the first president to really stand up against China and the dangers it presents including their expanding military presence and cultural control over Hollywood, sports (especially the NBA), Silicon Valley, and our government itself. China steals technology and has spies everywhere throughout the United States. Senator Dianne Feinstein’s driver was a long-time spy for the Chicoms. The Democrats have been bought out by China through campaign contributions or outright extortion by means of compromising evidence on video.Joe Biden and his son have been bought out by the communist party in China. The Chicoms are doing their best to see to it that their man is elected. They know Beijing Joe will pay them back and do what he’s told. —Ben Garrison