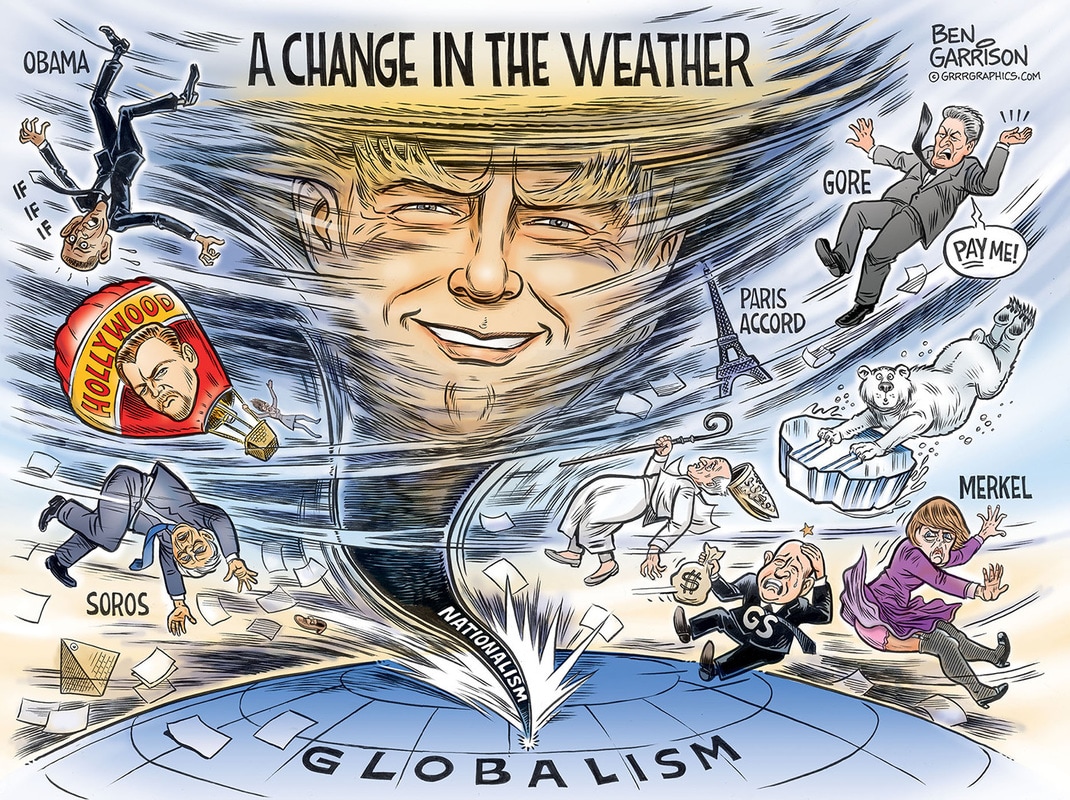 A Change in the Weather

I applaud President Trump for withdrawing from the Paris Climate Accord. It sends a clear message to doubters that he is indeed not in the pocket of the Illuminati like all of the presidents since Kennedy have been. As to be expected, the outcry was immediate and incredulous. He fielded criticism from Al Gore, the Pope, Lloyd Blankfein, Merkel and many others. Leonardo DiCaprio said, “Our planet was threatened by Trump’s careless decision.” Notice how he doesn’t use the word ‘Earth.’ Instead we’re just another planet out there—such as Mars—and its ready to have our atmosphere ripped away. Hey Leo, stick to acting and sucking in millions of bucks so you can leave huge carbon footprints with your private jets. Your pompous fear-mongering and hyperbole aren’t convincing.

The Paris Agreement would have put a big burden on the US. “This agreement is less about climate and more about other countries gaining a financial advantage over the United States,” said the president. It would have sent more jobs overseas, while hurting our economy. Shutting down greenhouse gasses while allowing them in China was a bad deal for our country. President Trump hates bad deals. He stands for our country first and foremost. He’s a patriot and nationalist, and that’s refreshing. Patriotism used to be equated with nationalism, but the globalist professors and the far left legacy media have trained people into thinking nationalism is evil. They equate nationalism as ‘nativism’ and hate. The left went so far as to call anyone who wanted to protect our borders as being ‘Nazis.’ This was part of their plan—change the language and brainwash people into supporting their objectives.

George Soros, who has spent what has been called a “staggering amount of money” to influence (hack) our elections in favor of his selections, also spent $30 million on Al Gore’s global warming programs, which aim to lobby carbon taxes to further impoverish and control U.S. citizens. It’s about more money going to the central bankers and global business interests at top of the pyramid. It’s about those at the very top conditioning minds so that they’ll readily accept global ‘governance,’ which means a one-world collectivist dictatorship run by slave masters. The end game for them is making everyone poor and dependent on government. This also means digital currency, mandatory vaccines and the further erosion of liberty. Eventually it means a culling of humanity.

If Obama, Soros, Merkel, the Rothschilds, Trudeau, Marcon are excited about the agreement, then we know from that alone that it must be rejected. We know scientists can cherry pick and distort data to promote the agenda as long as they are well-plied with Illuminati money. We know that Kissinger considers climate change to be the main pillar in erecting the New World Order. Trump just put a crack in that pillar.

The atheist Bill Maher sounds like fire and brimstone preacher when it comes to climate change. He displays a religious fervor when it comes to the topic. Those opposing his view are treated with contempt and ridicule. This method is used by the globalists to quell opposing opinions on the topic. Anyone questioning it gets called names. Scientists who question it lose their jobs and reputations.

Yes, the climate changes, but if the globalists really cared about ‘the planet,’ they’d be doing something about the most egregious danger out there today: Fukushima, which continues to destroy an entire ocean. We hear nothing about that from the illuminati, do we? Instead, Al Gore bangs on his desk in his seashore mansion and demands a $15 trillion carbon tax so he and his carbon control companies can get filthy rich.

The climate change narrative is being run by con artists such as Gore. They spew out the best distorted data money can buy. It’s bunk. There’s no reason we can’t have clean-burning coal and natural gas. Both are in copious supply. There’s no reason we can’t have industry and well-paying jobs returning to America. But as George Carlin once said, ‘The real owners don’t want that.”