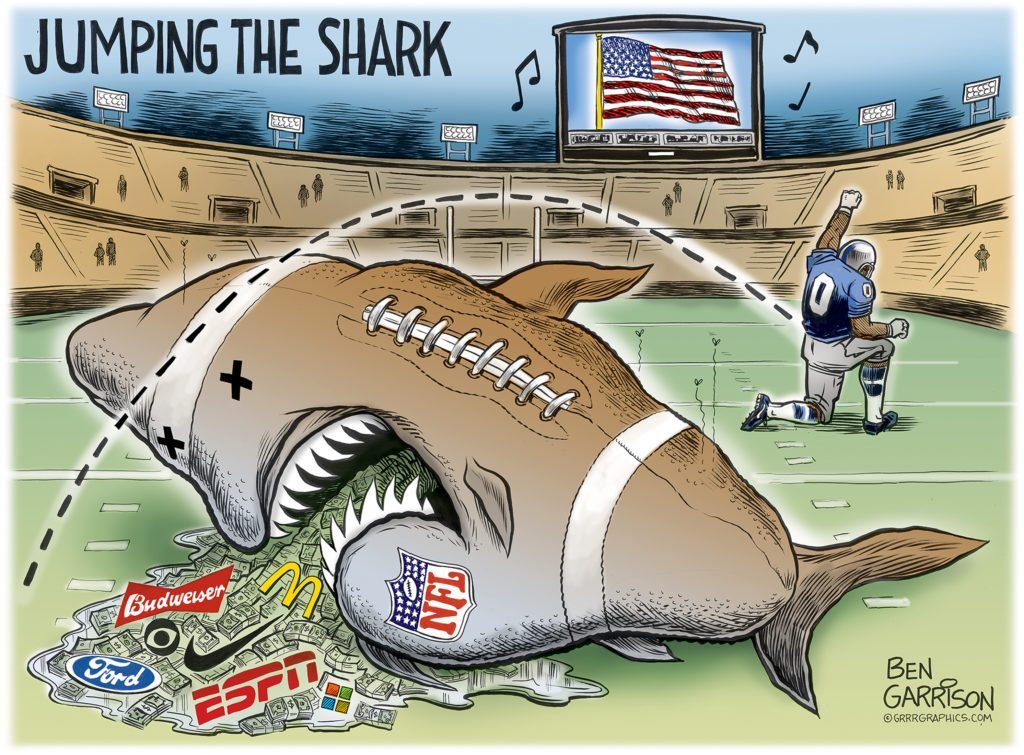 The Left has hated the NFL for a long time.

To them, football is a sport that encourages ‘toxic masculinity,’ which goes against the grain of political correctness. Injuries that were once part of the game were dramatized with increasing alarm—particularly concussions. That brought about efforts to make the game ‘safe.’ Rules were piled upon rules and the fun of the game was sapped. The games grew longer and more tedious. All scoring plays are now examined, thus enabling sponsors to pack in more commercials.

Next the players were feminized. That is, they’re now forced to wear pink during “breast cancer awareness month.” Even the refs throw pink flags. Truth is, they don’t want to cure cancer because it’s big business for the big pharmaceutical companies. The pink is there to make the game look ridiculous.

Too many Super Bowl halftime shows are now not suitable for children. They often feature Illuminati symbols, sexual imagery and violent images.

Extravagantly expensive stadiums are built at taxpayer expense. They are named after globalist companies. Children are taught about bathroom choices, because the new stadiums come with transgender-friendly options. Many fans then got priced out of the very stadiums they helped fund. The average family can’t afford the ridiculously high prices for tickets, concessions and souvenirs. Not to mention parking.

The hard working middle class (what’s left of them) can’t identify with the spoiled, multi-million dollar NFL players. To be sure, some of those players do charitable work, but too many of them are also arrested for DUIs, domestic abuse, general thuggery or even murder. Nobody wants to watch self-centered, show boating jerks who make more money in a few minutes of play than many viewers can make in a year.

If all of that weren’t enough, the sport has now become politicized. Those tuning into ESPN hear about social problems instead of statistics and “Trump Derangement Syndrome” has infected the broadcasts. When Colin Kaepernick began kneeling, the NFL should have immediately nipped his disrespect of the flag in the bud. After all, the Castro-loving QB was breaking the NFL’s own rules.

Instead, the NFL allowed it to spread. More players began sitting and kneeling while complaining vaguely about ‘inequality.’ When Trump spoke out against it, the commissioner, Roger Goodell, doubled down. Many more players began kneeling just because they don’t like our president. This was the NFL’s ‘jump the shark’ moment.

Now entire teams are cowering in the locker room, afraid of our flag while hypocritically talking about ‘unity.’ Our anthem IS about unity! it’s the one moment when all the fans and players of both teams are united Americans, regardless of their political beliefs.

The NFL claims ‘free speech’ allows players to disrespect our flag and Country. And It’s our free speech to speak out against their behavior and stop watching their product.