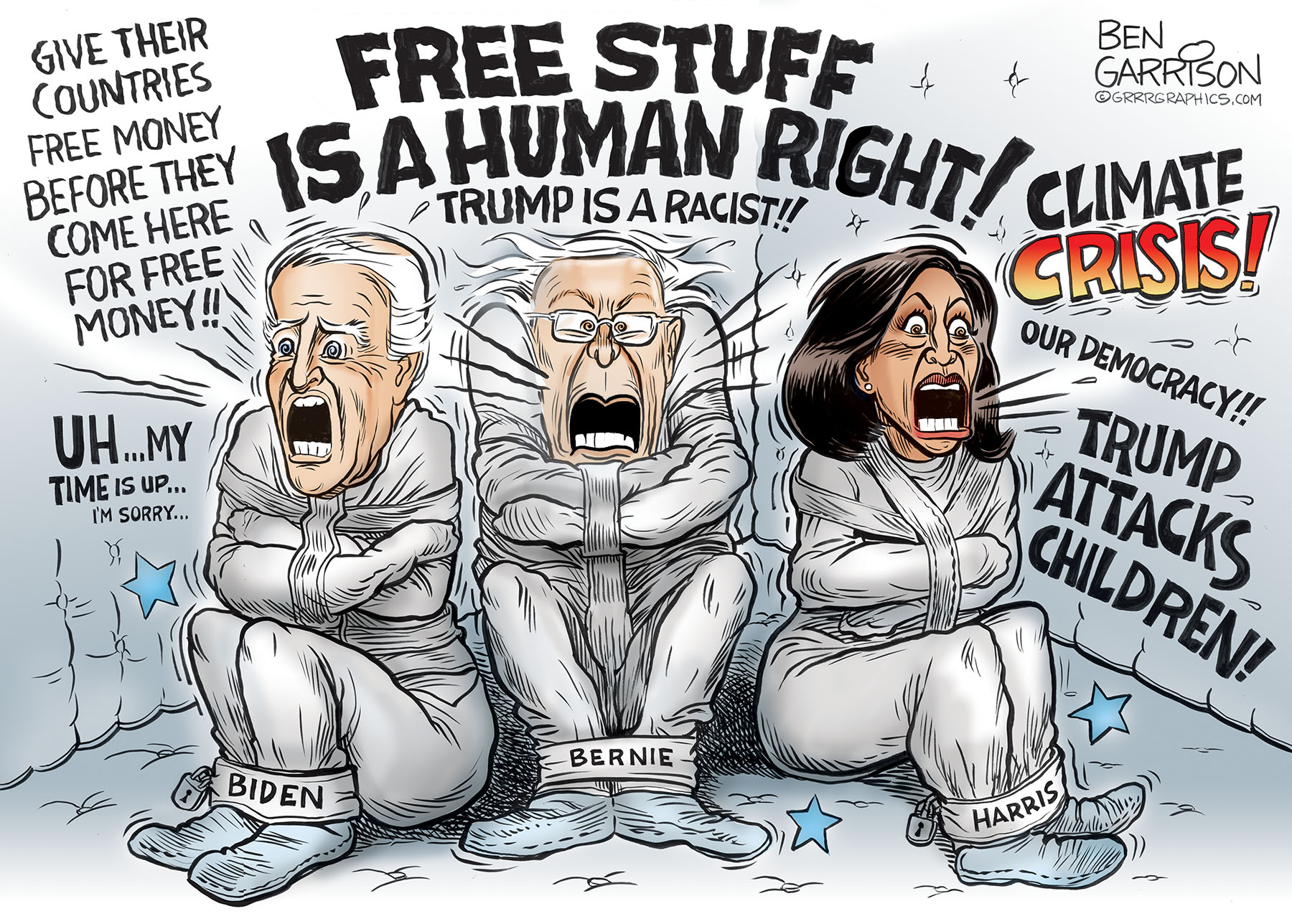 The Crazies are Running the Democrat Insane Asylum

“An Amazing Display of Hate”

The Democrat’s second debate was pretty much the same as the first except they virulently ramped up their attacks on President Trump. Bernie Sanders said Trump was a ‘racist,’ without any proof. Kamala Harris went on a virtue-signaling rampage about how Democrats need to protect children of illegal immigrants from Trump, who wants them all in cages. Or so she claimed. The well-aged Biden had a bumbling and weak performance. Creepy Joe got ‘owned’ by Harris. He should have walked over and sniffed her hair—that would put her in her place.

They all support free health care, which Bernie called ‘a human right.’ Everyone coming here illegally will also get to enjoy that right. This naturally means much higher taxes. They also pushed their climate change claptrap, which naturally means even more taxes. Free college, which…well, you get the picture. As the debate clanged on, I began to think they were all nuts. They belonged not on a stage, but in a loony bin.

They all love big government and the power it provides them. They want people to be dependent on that government. They want god-like control over more lives. The Democrats are addicted to power and bigger government at every turn. They want to be worshipped. After all, they are ’saving the planet.’

They want to see us stripped of our liberties. Eric Swalwell, the militantly ignorant young punk from California, wants government to buy back all weapons, excluding shotguns and handguns. If he succeeds, you can bet the government will then go after the rest of the guns. Swalwell, a budding young tyrant, actually loves guns—he simply wants his government to have them all. That way he can use that government to force citizens into do his bidding. Ultimately, government is violent force. Fear of government keeps people paying taxes. Under Democrat rule citizens will be forced to slave away even more to pay for ‘climate change’ and all the free stuff.  The Democrats never say ‘Our Republic.’ Instead they constantly and unctuously say ‘Our Democracy.’ What they mean is ‘Our Socialism.’ That’s what they really want.

Swalwell stupidly uttered the stupidest line of the night. “We will be the generation to end climate chaos.” Yes, those pesky four seasons must be brought under government control! There must be order! The Democrats have delusions of godhood. They’re crazy. What’s next, slowing the Earth’s rotation?

Buttigieg said Republicans no longer have the right to use religious talk because he said they favor caging the children of the invaders, er, immigrants. Yet all of them favor taxpayer-funded abortions. Apparently they think it’s noble to murder unborn children.

Welcome to the insane hateful world of socialism.

Like our cartoons? Buy a “coffee” for Ben, A fun way to support GrrrGraphics! Thank you for your Donation!