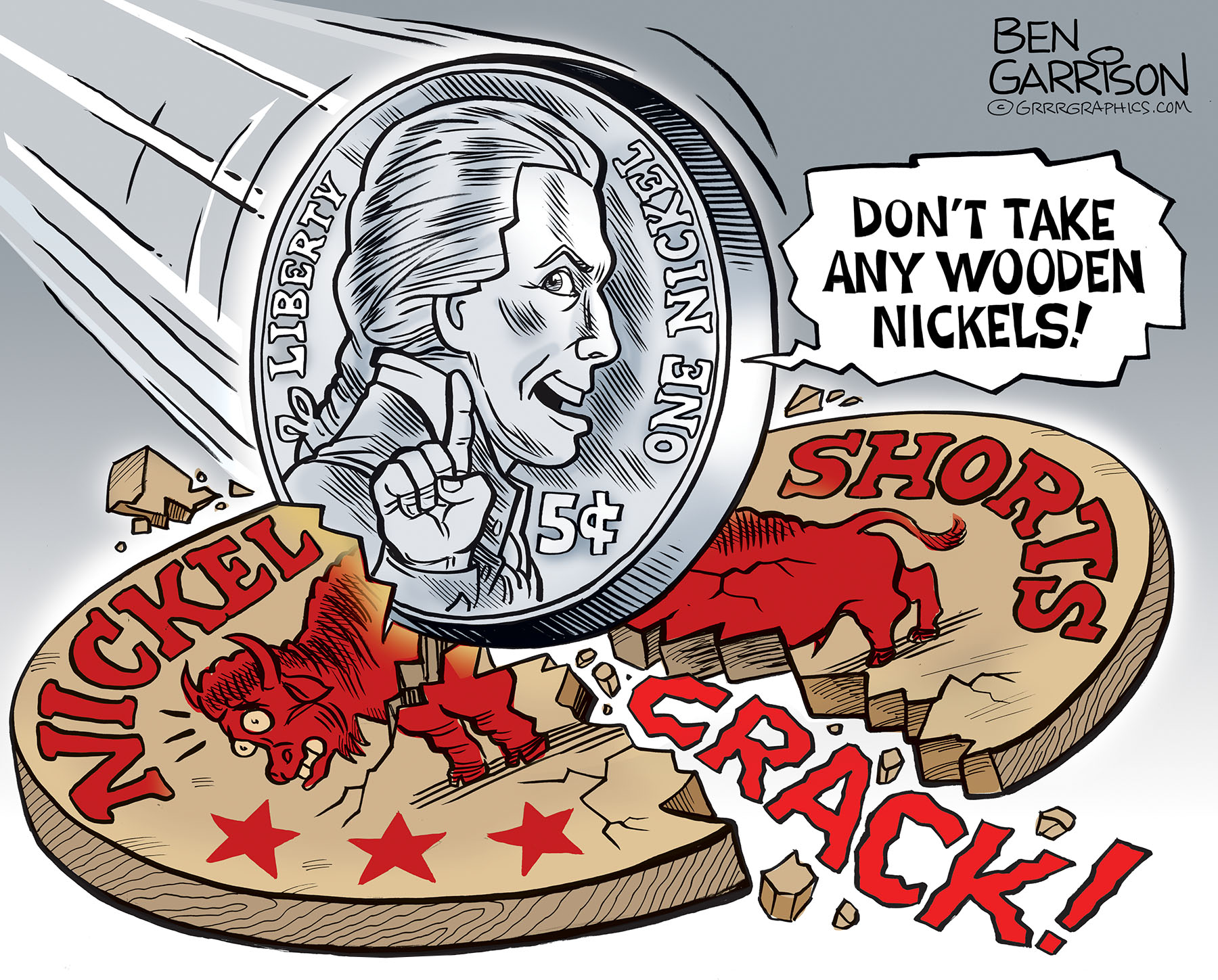 A nickel for your thoughts?

Once upon a time, America’s money was based on real value that could be held in one’s hand. A dollar is still defined in the Constitution as a silver coin containing 371.25 grains of pure silver. Gold and silver coins or currency backed by gold and silver were the only legal tender.

Fiat money notes were forbidden. When our country was founded, a solitary cent (commonly called a ‘penny’ today) was a substantial slab of solid copper. (Today a cent is zinc disc with a thin layer of copper on the outside.) A nickel, also known as a ‘half dime’ in the 1800s always had some copper in it. During WWII there was a nickel shortage and so the nickels were actually 35 percent silver and the rest copper.

How things have changed. Money has become a sad parody of its original forbears. Our money has, in a way, become wooden nickels. We have been swindled. Congress illegally turned over its right to regulate money over to private, globalist bankers. The Federal Reserve now prints currency like madmen. It benefits the billionairiat—you know, the people at Davos. The WEF. The oligarchy that owns the central banks and the Federal Reserve. Their currency doesn’t even have to be printed. It can be created electronically and it’s backed by nothing but debt. It has allowed us to be ruled by an unelected cabal of globalist tyrants. It has turned our citizens and future generations into slaves.

What does this all have to do with today’s nickel, you may ask? Our five cent coin is now worth a dime, thanks to its nickel content. To be sure, nickel is considered a commodity just like silver. The latter precious metal was stripped from our coins under the Johnson administration. Will they remove the nickel from our nickels? They already did that during WWII. A nickel shortage forced the US Mint to coin the nickels using mixture of silver and copper. That won’t happen again. More likely our nickels will become zinc discs. If they do that, why have cents or nickels at all? The pesky change would be nearly worthless, but they’ll continue to inflict the annoyance on us because the globalists are also sadists. They love making a mockery of our formerly real money.

Recently nickel prices doubled. A Chinese bank built a massive nickel short position and it blew up on them. They couldn’t cover. The London Metal Exchange (LME) halted trading to sort things out. It’s all being papered over now, but it shows you what can and should happen when real money gets suppressed.

We’ve seen silver prices rigged by the central banks for decades. There was a glimmer of hope for silver back in 2011. It was said that JP Morgan was in deep trouble with their derivative short positions on silver. If silver eclipsed $50 per ounce (and it looked like it would) JP Morgan could have gone under. Of course, the banksters weren’t about to allow that to happen. Instead, they collusively and illegally shorted massive amounts of silver that didn’t exist. The price collapsed back down to $13 a few years later. Many of of stackers thought we’d get rich by means of silver. Instead, we got crushed. JP Morgan had to pay a fine later one, but big deal. They and Goldman Sachs have access to a printing press. As it turned out, Bitcoin was the place to be. The latter was not ‘riggable’ by the central bankers.

A friend said he was going to hoard five cent coins because of the value of the nickel inside. The metal value is higher than the face value.  That sounds like a great move, but how does one sell a nickel coin for its nickel content? A nickel coin is 75 percent copper and 25 percent nickel. It’s worth a dime, but if ones spends it they will only receive the printed face value, just like a monetized silver coin. It clearly says “ONE DOLLAR” on a Silver Eagle, even though any coin store will charge you for the silver content along with a hefty premium. Take it to a bank or spend it at a supermarket and you’ll get one buck for it if they accept it at all. Try telling the IRS that your silver is only worth its stated face value—they will insist you pay the investment value. They’ll say your Silver Eagle is worth the metal content, not the face value. The tyrants want it both ways. What a wicked web was weaved when we abandoned constitutional money.

We can try melting our nickels down, but that would require a smelter. Who knows how much that would cost, so for now the metal value in a nickel coin will go unrealized.

As for the price of silver, one can only hope we’ll see another dramatic rise, but right now the shorts are still in control. When it comes to precious metal, paper covers rock. Federal Reserve paper cannot cover Bitcoin, however. That’s why our political puppets are so eager to remedy that situation.

Last in stock at this special price!