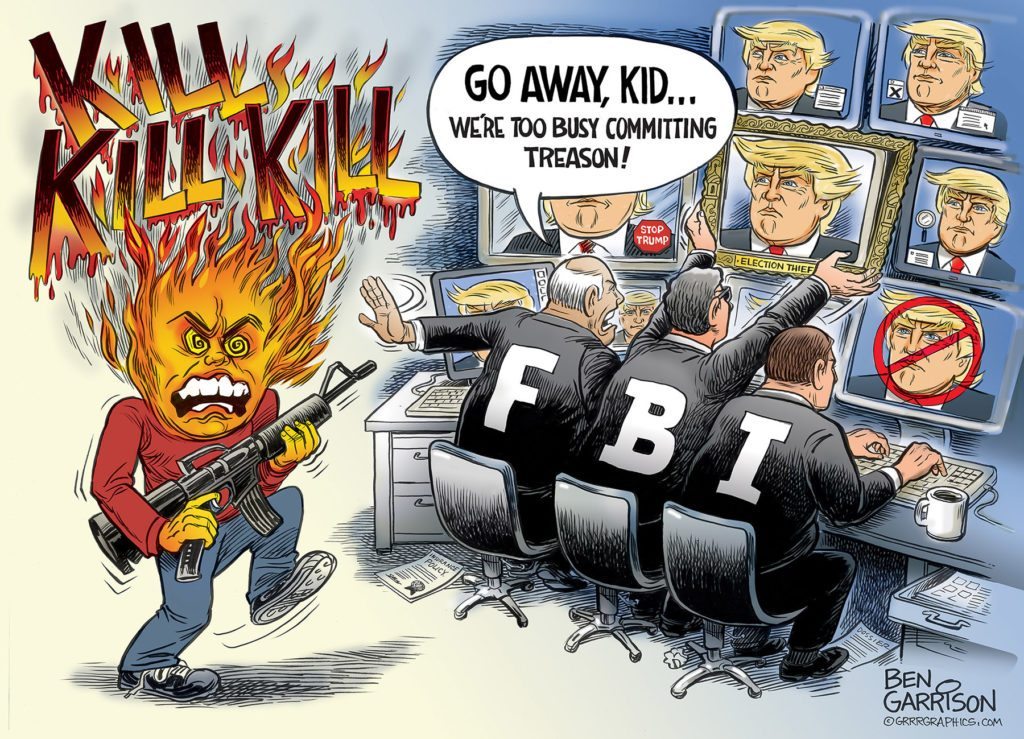 The FBI had prior warning about the young murderer in Florida, who bragged about his murderous intentions. They could have stopped the troubled Nikolas Cruz. Instead they did nothing.

The FBI was too busy carrying out the orders of Hillary and Obama. Yeah, I’m talking about the phony “Russia helped Trump to steal Hillary’s election” canard. Since I’ve criticized the FBI, I suppose I must now make the perfunctory mention about how there are many good people at the FBI. That may be true, but the fish rots from the head down and those running the bureau have become politicized and corrupted over the years.

For a long time our country got along fine without the FBI, which got started just before the appearance of an even more useless institution, the Federal Reserve. But I digress. Local and city governments were seen as becoming increasingly corrupt and subject to bribes. Therefore, a squeaky-clean group of men with high morals stepped in to clean things up. President Theodore Roosevelt, a progressive who liked the idea of empire and bigger government (taking after Lincoln), was there when the FBI was founded. J. Edgar Hoover used his FBI to create secret files containing the vices of all of our presidents and many politicians, thus ensuring his power. Like all government institutions, the FBI grew larger and more inefficient. Too many in government are concerned with perpetuating their jobs and power first and foremost. The FBI has become part of the Deep State along with the CIA. The Deep State at this point must consider itself the 4th Branch of government. They think they get to help decide who the president shall be, and it wasn’t Trump.

After every mass shooting comes the familiar bleat of gun confiscation. The 2nd Amendment and ‘gun nuts’ are blamed while the sickness gripping the country remains unaddressed. That sickness is both physical and spiritual. Too many boys are pumped full of drugs in order to get them to sit still in the statist, politically correct schools. Big Pharma makes money by advising doctors to prescribe teenagers pills to parse any natural moodiness. That’s the physical.

The spiritual is Christianity has been replaced by nihilism and moral relativism. Selfishness and ‘feelings’ are paramount. Kids are even encouraged to choose their own sex.

Instead of taking away our guns, which is a very bad idea, a simpler solution would be to arm the teachers or have a well trained security staff looking out for the first signs of trouble.

If teachers were permitted the right of concealed carry, it would give any potential shooter a bit more pause. Instead, the left does their usual virtue signaling by slapping up signs such as “This is a gun free zone” to stop the shooters. That, of course, only encourages them and the students are sitting ducks.