Repeat After Me, Vaccines are safe and effective until they’re not

Scott Adams, the creator of the popular comic strip ‘Dilbert,’ defended getting vaccinated against Covid because he believes in science. Apparently the cartoonist and self-proclaimed hypnotist was himself hypnotized by the legacy media and corrupt medical experts such as Fauci. They convinced him to get the jabs. Had he carried out any kind of independent research, he might have made a smarter decision.

I didn’t know any of this since I no longer follow Adams, and he blocked GrrrGraphics on his twitter feed back in 2019, but I came across a disturbing video that he posted on YouTube. He may be experiencing some injection remorse, but his pride will not let him admit it. Not completely. He begrudgingly said we anti-vax types may be right, but we were right ‘accidentally’ and we’re still stupid compared to him. Fine—that’s his opinion and he’s entitled to it.

What disturbed me most was watching him launch into a blistering, purple-faced tirade while using extremely foul language—just because some woman on the streaming comment section questioned his wisdom for getting the experimental and grossly under-tested mRNA pokes. He called the woman the ‘C’ word and insulted her husband and family. It was grotesque to hear him say these things and I will not repost his words here.

Then he seemed to collect himself and I even thought he would apologize to the lady and his audience, but no. He seem to take satisfaction with his foul-mouthed performance. He said it would cost him about $1,000 because YouTube would no doubt demonetize his segment, but he said it was ‘worth it.’ At this point the little respect I had for Adams plummeted. Does he have any idea how many conservatives have been demonetized then banned completely from social media just because they did their research and were trying to tell the truth about the vaccines? Isn’t it telling that Adams was thinking at that moment not of the health or free speech of others but rather the money he might lose? Adams is a millionaire fifty times over and he’s married to a supermodel half his age, yet THAT was his concern? Dogbert would not approve.

4chan’s ‘/pol’ promptly raked Adams through the coals and I know what that’s like, but Adams truly deserved their rebuke. Adams fancies himself a man of brilliance, but he failed to do his homework on the Covid vaccines, which are neither safe nor effective. They are killing a great many.

I’m three months older than Adams, but this isn’t a Boomer thing. It’s a vax cult vs. vax freedom and we will probably see the divide widened still further as time goes on. The pro-vax camp tends to demonize the anti-vaxxers. Apparently their vaccines won’t work until everyone has had them.

I will never take the jabs and I have natural immunity, having had Covid last summer. Scott appears to be in good physical shape. With all his millions of dollars he can certainly afford to got to the gym and work on his tan. That’s great. He could easily survive Covid like I did, but he instead chose to get dangerous substances jammed into his arm. Good luck with that, decision, Scott. I think we should have the freedom of choice and once we relinquish that the totalitarians will control our health for us. I want the final say about what goes into my body, but people such as Fauci and Gates want to make that decision for us.

If Adams is truly are as smart as he says he is, he will admit he made a mistake. Oh—and have more respect for women. C’mon, man…apologize. 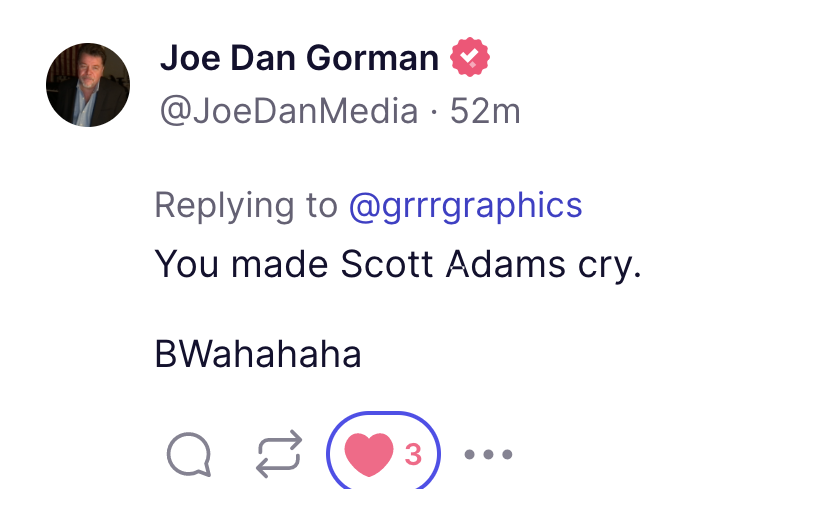