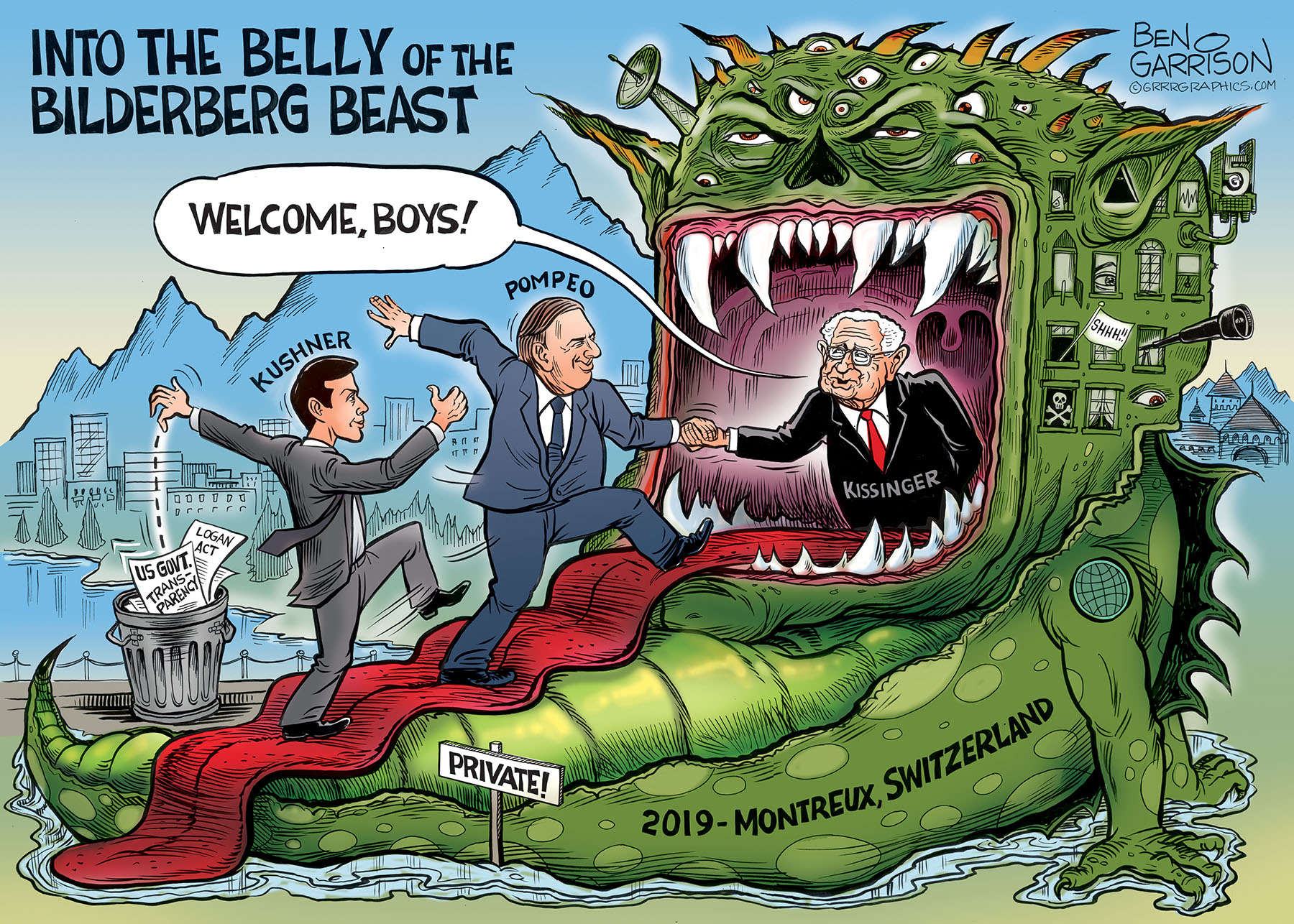 Not too long ago the Bilderberg Meetings were considered to be a laughable conspiracy theory.

The complicit mainstream media never mentioned such important illuminati get togethers. Eventually the truth came out. We now know that such gatherings have been taking place for decades, but we’re not allowed to know much about what goes on in their meetings.

To satisfy our curiosity, they might release a list of participants and talking points, but that’s all. Globalist leaders, billionaires, central bankers, politicians, and corporate big shots decide our fate while keeping us in the dark. Those journalists who get too nosey are manhandled and threatened by the police, who protect their masters at every turn.

These globalist movers and shakers don’t just meet for coffee or brunch. They are there to make policy decisions about war, culture, and choosing our next political leaders.

Remember when Hillary Clinton and Obama disappeared for a day?

The media would not say where they went, but they were at a Bilderberg meeting, conveniently being held then in Virginia. It was decided there that Obama would be president and Hillary would be his secretary of state.

Last year’s meeting dealt with the rise of nationalism, which they pejoratively refer to as ‘populism.’ Shortly thereafter the censorship began. They wanted libertarians such as Alex Jones to be de-platformed and erased from social media. They are still carrying out blatant censorship today.

Speaking of libertarians, the billionaire Peter Thiel is a regular attendee of the conferences. I once thought he was a libertarian and Trump. Yet why would a libertarian be working with the CIA on info gathering programs such as his “Palantir?” Thiel made a fantastic amount of money as an early backer of Facebook. The CIA was also an early backer.

Coincidence? Of course, the excuse they give us is how such things will make our lives more convenient and ‘more secure.’ Wrong. It only makes us less free and more enslaved to the global elite. We no longer buy or own software or control our own files. It’s all in ‘cloud’ form now. They want all our files on the cloud. That way we can easily be shut off from our own work. That’s also why they want a cashless society. But I digress.

The latest meeting was held over the weekend in Montreux, Switzerland and lo and behold, two of Trump’s men attended. Kusher and Pompeo were there, probably to discuss a possible war with Iran. We aren’t allowed to know what was said. Freedom of the press is dying. Our government is no longer transparent. They too only have to proclaim ‘national security’ and we are left in the dark.

John Kerry is a private citizen now, but he’s still consulting with and giving advice to Iran, which is a clear violation of the Logan Act. Nothing has happened…yet.

Elite American citizens go to the Bilderberg conferences and discuss what will be done with various countries. They aren’t elected to do that and we’re not allowed to know what they’re saying. It could be considered an indirect violation of the Logan Act, but again—nobody cares about that? Nobody cares, because the Deep State gets to do whatever they want. They are above the law.

An old friend once asked me to prove the Deep State even existed. He said it was just conspiracy theory nonsense. The Bilderberg is a good example of the Deep State. They aren’t elected, but they make important decisions that deeply affect our lives. Same with the CFR and the rogue security agencies. We aren’t allowed to know what they’re doing.

The electronic police state net will close around us tighter with 5G. They want us powerless, while the illuminati beast decides our fate. It won’t be pleasant.