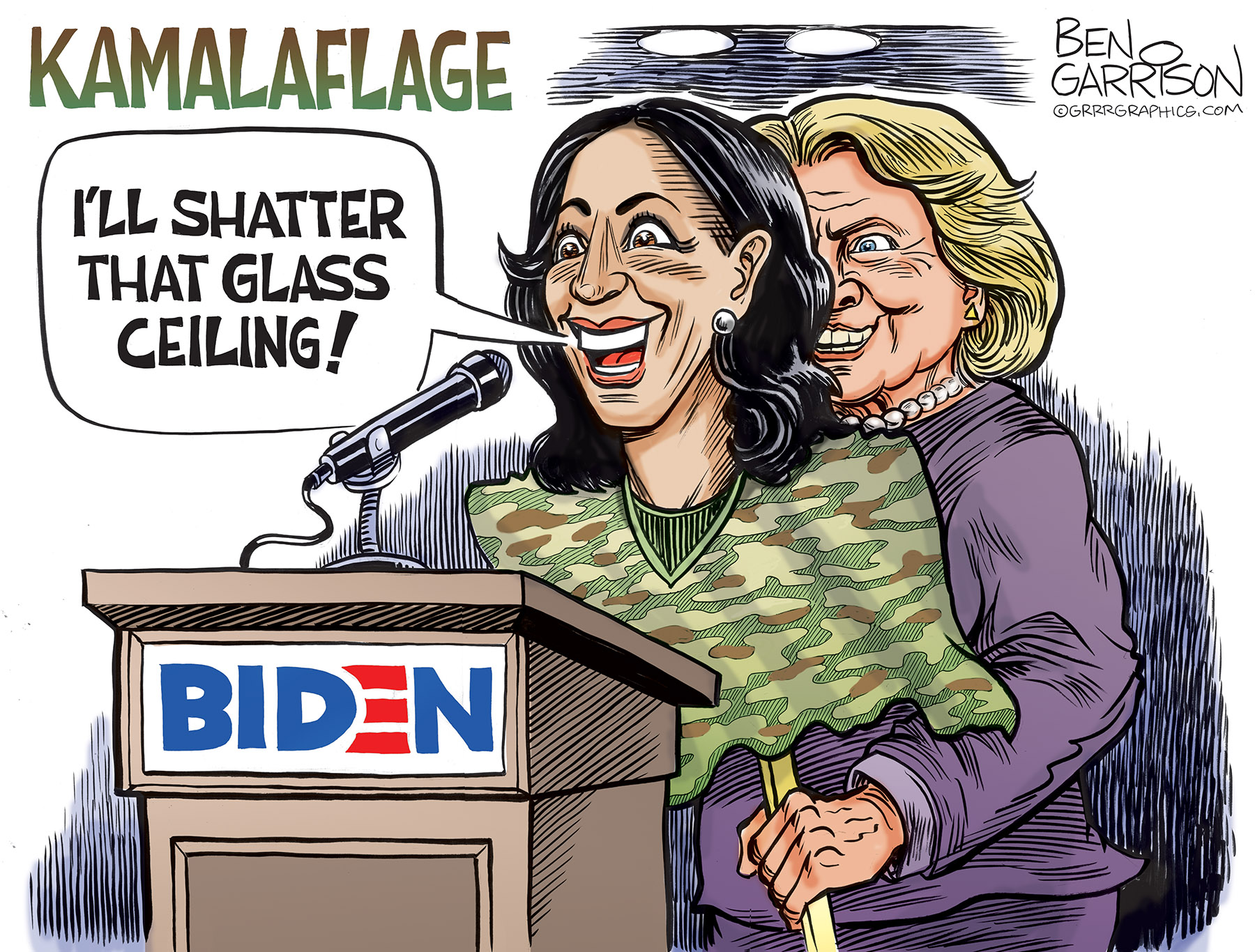 In several cartoons I predicted Hillary Clinton would run for president again in 2020. She can’t help herself–her life’s quest has been about reaching for penultimate power. After Biden was nominated, I had a sneaking suspicion that he would choose Hillary as his running mate. I was wrong.

Or maybe not. Hillary must know how much she’s despised and she didn’t want to risk becoming a three-time loser as a presidential candidate. So Hillary came up with a different strategy to gain presidential power, even if indirectly. Hillary still has the most influence in the Democratic Party and she’s also Queen of the Deep State. She knows how to pull strings. My conspiracy-filled brain suspects she arranged Biden’s nomination. She knew he would be the weakest candidate. The basement-bound Biden is too old too feeble mentally.

Hillary probably influenced Joe to pick her puppet: Kamala Harris. Hillary controls Kamala and therefore she would control the presidency once Joe steps down. Even if Biden doesn’t step down, he’ll remain nothing more than a corrupt figurehead who takes orders from the Deep State. Hillary would be doling out the orders.

Kamala is Hillary’s front woman. When Harris was completely obliterated in a debate by Tulsi Gabbard, Hillary exacted revenge by smearing Tulsi as a ‘Russian asset.’ It was a blatant lie and insult to Gabbard and her military career, so Tulsi sued Hillary.

The problem for Hillary: Biden and Harris may be her malleable stooges, but they are also weak candidates.

Harris failed miserably in the primaries. The progressives in the Democrat party like neither Biden nor Harris. Biden is in the pocket of the Chicoms. He’s not only a corrupt sexual offender, but also he’s not in touch with reality due to his mental decline. Harris was an overly aggressive prosecutor who aided and abetted a bloated prison industry. Harsh sentences were meted out for non-violent offenders. It’s something Trump has tried to reverse.

Kamala is Hillary 2.0 and while younger in appearance, she’s just as unlikable as the Hildebeast. Many of Kamala’s policy stances are absurdly far-left and untenable. She’ll be an easy mark for Pence if there are any debates.

Original Art and more at The Trump Collection!