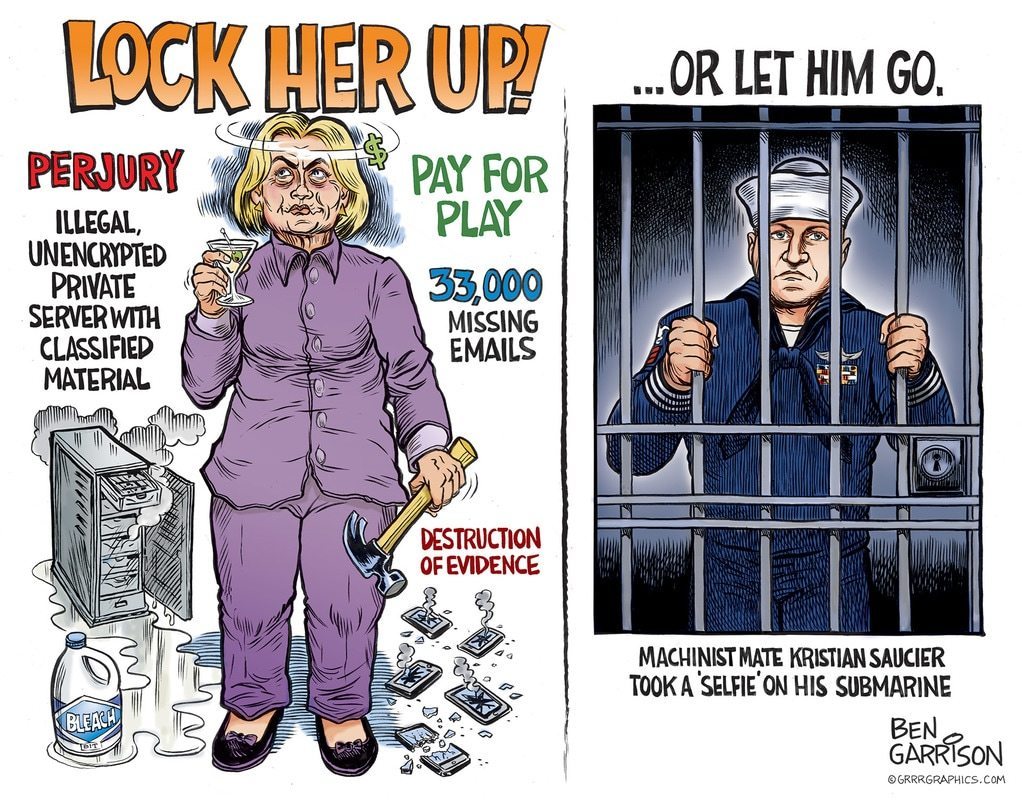 One of the most popular ‘memes’ on the Trump campaign trail was the chant, “LOCK HER UP!”

That desire remains as relevant today as it did during Trump’s campaign. Hillary is a sociopath who enjoys getting away with her crimes. She considers herself above the law. Whether it be cheating at cattle futures, taking illegal campaign contributions from China or making sure the Clinton Foundation steals millions in donations to Haiti, lying about Benghazi or engaging in outright ‘pay for play,’ she seems to know she will never be held accountable.

Oh sure, she’s forced on occasion to drag her cankles to some Congressional committee, where she will look at them contemptuously with heavy-lidded eyes and a bored face as she feeds them lies. That’s the closest she’s ever come to facing justice and it’s a crying shame. LOCK HER UP!

The illegal server in her bathroom was probably part of her ‘pay for play’ scheme. Hillary is a controller. She wants her privacy and she wants to use information that benefits her pocketbook. She likes a rigged game and she wants it all kept under the table. That’s why she made sure she rigged the DNC operations against Bernie. It’s why she made sure she received debate questions in advance. She’s also in league with Podesta—who boldly practices Satanism and pedophilia and gets away with it. She uses public service to serve herself. She wasn’t very smart about technology, though. Her illegal server was unencrypted—not even a password was necessary for anyone to hack it.

After WikiLeaks revealed some sordid details, her lying heart pumped out a story about the Russians and Trump working together to ‘hack the election.’ Rubbish. LOCK HER UP!

It can’t take place soon enough, but she’s well-connected and part of the Illuminati. She will probably get away with crimes. She’s slippery as slime and she’s above the law. She things the law pertains to the ‘little people.’ People such as Kristian Saucier who took a photo of himself aboard his submarine. Even though no serious damage was done, they threw the book at him. He’s currently locked up. Hillary’s crimes were 100 times more damaging, yet she eludes the prison bars. Instead she gets to go shopping for $10,000 outfits with her pal Huma while she totes a $2,500 handbag.

That’s how it is in America these days, though. Unequal treatment under the law. Congress gets special, free health care and many other perks that aren’t available to the average citizen serf. Central bankers can steal billions of dollars in the form of real estate derivative fraud and not one of them went to prison. Instead, they got rewarded with gigantic bonuses and trillions in bailout dollars. Yes, the Illuminati and Deep State certainly do protect their own. The globalist stooge Obama has a stolen social security number and a birth certificate that is queer as a six dollar bill. Or maybe a $666 dollar bill. Yet he faces no consequences.

“There was no intent,” said Comey. That should be printed on Hillary’s ’Stay out of jail’ card. Try using an excuse such as that next time you’re in court. “I didn’t mean it, your honor.” See what happens. LOCK HER UP!

UPDATE:   My cartoon was not designed to excuse what Kristian Saucier did. Whether he did it absent-mindedly or intentionally is beside the point. He broke the law and went to a military prison. The point of the cartoon is Hillary broke the law and her acts were far more damaging. And yet she gets away with it and is now contemplating her next run for the presidency. Why did she get away with it? Because she’s well connected to the CIA/CFR/Illuminati deep state that wants here there, that’s why. In effect, she has blanket pardon for whatever crime she wants to commit. Not so with the little guy. Saucier is paying a price for his actions. If he was a young John McCain—a son of a powerful admiral—would he be behind bars right now? Of course not!

This is the country in which we now live. That is, we’re forced to witness a chronic, uneven application of the law. ​