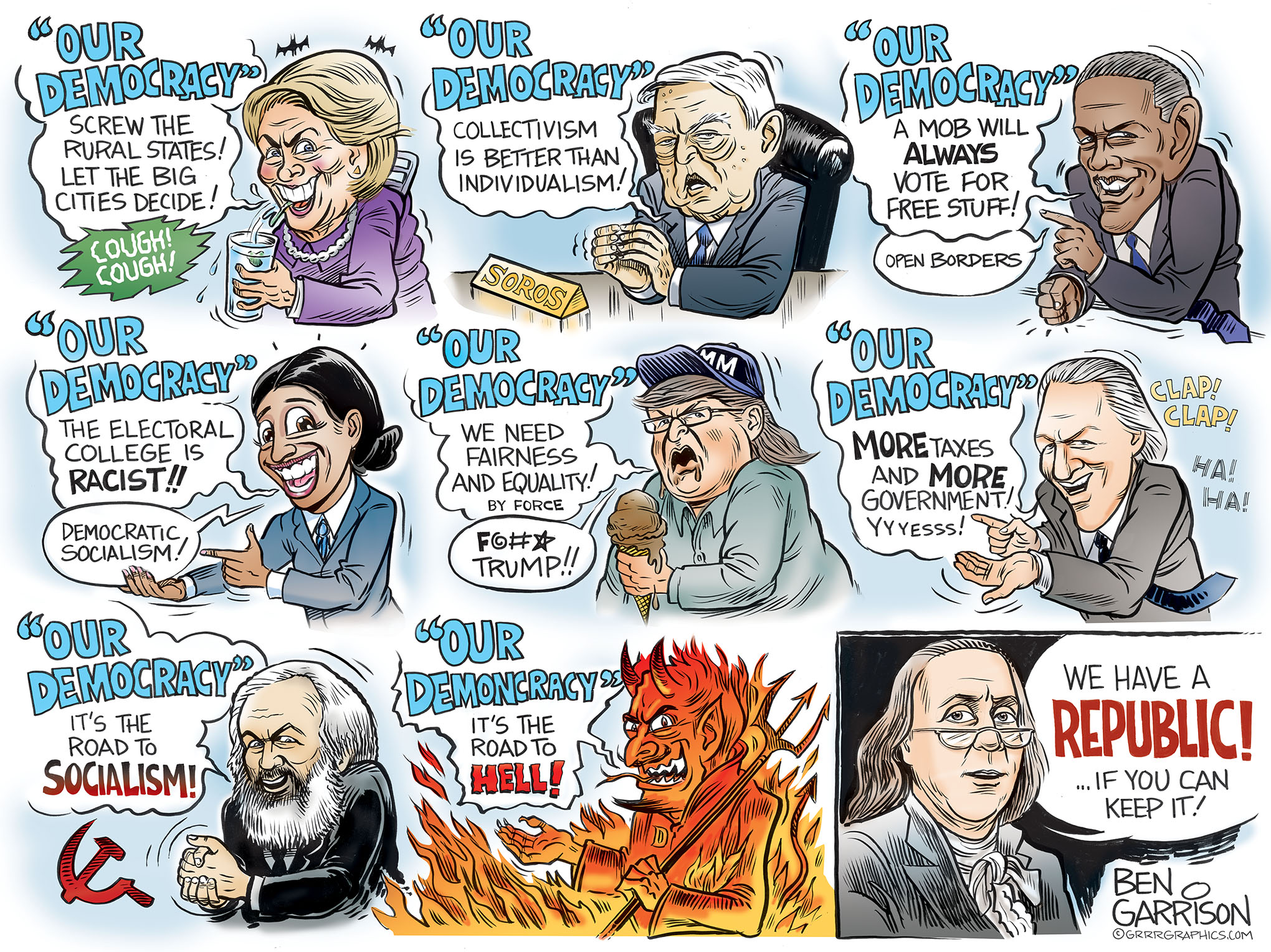 They all say it. The people on the left, that is. If you’re listening, you’ve probably heard it, too: The words “Our Democracy.”

Hillary Clinton says it incessantly. She won the popular vote and therefore thinks she should be president. She’s irked that the pesky Electoral College stopped her. She hates those damn fly-over red states. George Soros funds protests for ‘Our Democracy.’ Barack Obama has said it plenty of times, even though he’s supposedly a constitutional scholar. Alexandria Ocasio Cortez has said it and now she’s calling for the removal of the Electoral College. Michael Moore wants socialism outright, but says ‘Our Democracy’ at every turn. Bill Maher and his guests say it frequently each week on his HBO talk show, “Real Time with Bill Maher.” Last week he said people should be forced, by government, to pay for solutions to ‘climate change.’ Karl Marx would be tickled if he could hear ‘Our Democracy’ being endlessly repeated because he said, “Democracy is the road to socialism,” i.e., communism. History has shown what socialism leads to—Hell on Earth.

I believe the left is endlessly repeating ‘Our Democracy’ for a reason. They know it leads to what they really want—socialism. They know a mob will vote for free stuff at the expense of individual liberties. It’s one of the reasons we hear the left stridently calling for the end of the Electoral College, which helps protect our Constitutional Republic. Cortez claims it’s ‘racist.’ Bill Maher says the Electoral College is an anachronism. He even claimed it’s not necessary to have two Dakotas or Wyoming. “Nobody lives there, why do they get two senators?” Because we’re the United States, Bill—not the United Blob of Washington D.C.

Bill and Hillary and their ilk want only the cities to have the say. They know mob is easily propagandized and controlled in the cities—it’s one of the reasons it’s now dangerous to wear a ‘MAGA’ hat in them. The lefty mobs there think physically assaulting their opponents is virtuous. They no longer want civility. The left controls their thinking—the endless repetition of ‘Our Democracy’ is a form of mind control. They want people to think of our country as a democracy—not a republic.

America is NOT a democracy. The word is not in our Constitution. Our founding fathers despised a naked democracy, because they knew it would quickly lead to tyranny. It’s one of the reasons why Obama and the left want open borders. The influx of a mob looking for free stuff will vote as they’re told—they’ll vote to take away our guns, our money and in the end, our lives. The mob will vote to destroy the individual. Obama and his lefties want tyranny. They see the people as cattle. We must be tagged, brainwashed, and taxed. The Deep State wants more power and control and the left wants bigger and ever-more controlling government. “Our Democracy” is repeated endlessly because they want to control minds to achieve this end. Shamefully, even some Republicans are now saying it. No MAGA-minded person should ever say “Our Democracy!”

Keep your radar turned on for the phrase ‘Our Democracy,’ and when you hear it, immediately say to yourself, “NO! We are a REPUBLIC.”

We must fight to keep it.