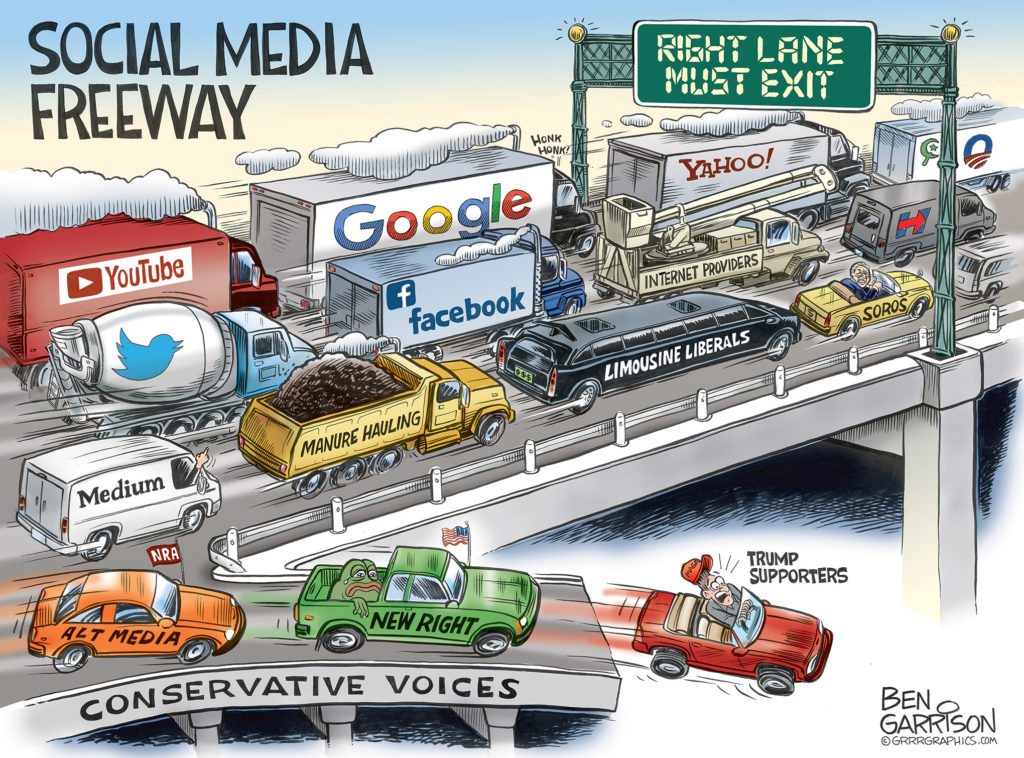 Last week I made brief appearance on a TV news show out of New York.

The subject was censorship on Twitter. GrrrGraphics lost 2,000 in the sudden and silly ‘Russian bot purge,’ but we gained most of them back (and more) by the next day. We knew people who were banned for no particular reason other than their connections to conservative leaders on social media. Tweeting pro-Trump messages is intrinsic proof of Russian bots, right? Hillary thinks it is. Such anti-Russia hysteria also diverts attention away from her crimes.

We are one of the few to obtain the coveted blue check mark on Twitter. There was a young man on the news show presumably there for ideological balance. He casually stated that the blue check marks were nothing but status symbols—bragging rights that have little meaning. I was taken aback by his statement, but was unable to summon up the proper reply. After all, public speaking is not my forté. I’d rather draw cartoons.
As in all my public appearances, I always think of what I ‘should’ have said later on. In this case, the blue check mark performs a valuable purpose. That is, it announces to the world that the account belongs to a real person, with a real name and face and whatever gets tweeted out is not from some anonymous troll or Russian ‘bot.’ In other words, it’s free speech combined with responsibility and accountability. Apparently Twitter doesn’t want that. They should be verifying a lot more identities and giving out even more check marks, but they instead stopped giving them out altogether late last year. Why? Because they know more commotion and consternation results when verified people get their plugs pulled for a trifling reasons. It happened in the case of the blue-checked Milo Yiannopoulos. It’s easier for Twitter to delete check-less, conservative voices while dismissing them as trolls or Russian bots.

Hillary said the Internet needed an ‘editor.’ What she really wants is Chinese-style censorship—with globalists like her in charge. She already acted as a censor when she was able to paint a harmless cartoon frog into a symbol of racist hate. She’d still enjoy shutting up anyone she considers ‘deplorable.’

We know that the Shadow Government and Deep State are losing the battle of ideas. They no longer have a monopoly on controlling opinion.

Their mainstream corporate media puppets are no longer mainstream. They’ve become irrelevant jokes. They’re losing viewers because they continually spew lies instead of the truth and more and more people have awakened to that fact. They know they can find the truth from citizen journalists on the Internet who make little if any money for their dedication. They depend on donations and views, but they’re now facing demonetization and shadow banning. Supposedly it’s all based on a terms of use policies—and the owners of social media capriciously determine the meaning of their own policies.

The war against the free speech of the right is likely to end badly for the Silicon Valley lefties who would rather delete than allow debate. Their habit of virtual book burning may end up torching their own skirts. They will wend up losing a vast amount of subscribers, viewers and advertisers. They will encourage entrepreneurs to set up their own free speech playing fields on the Internet.