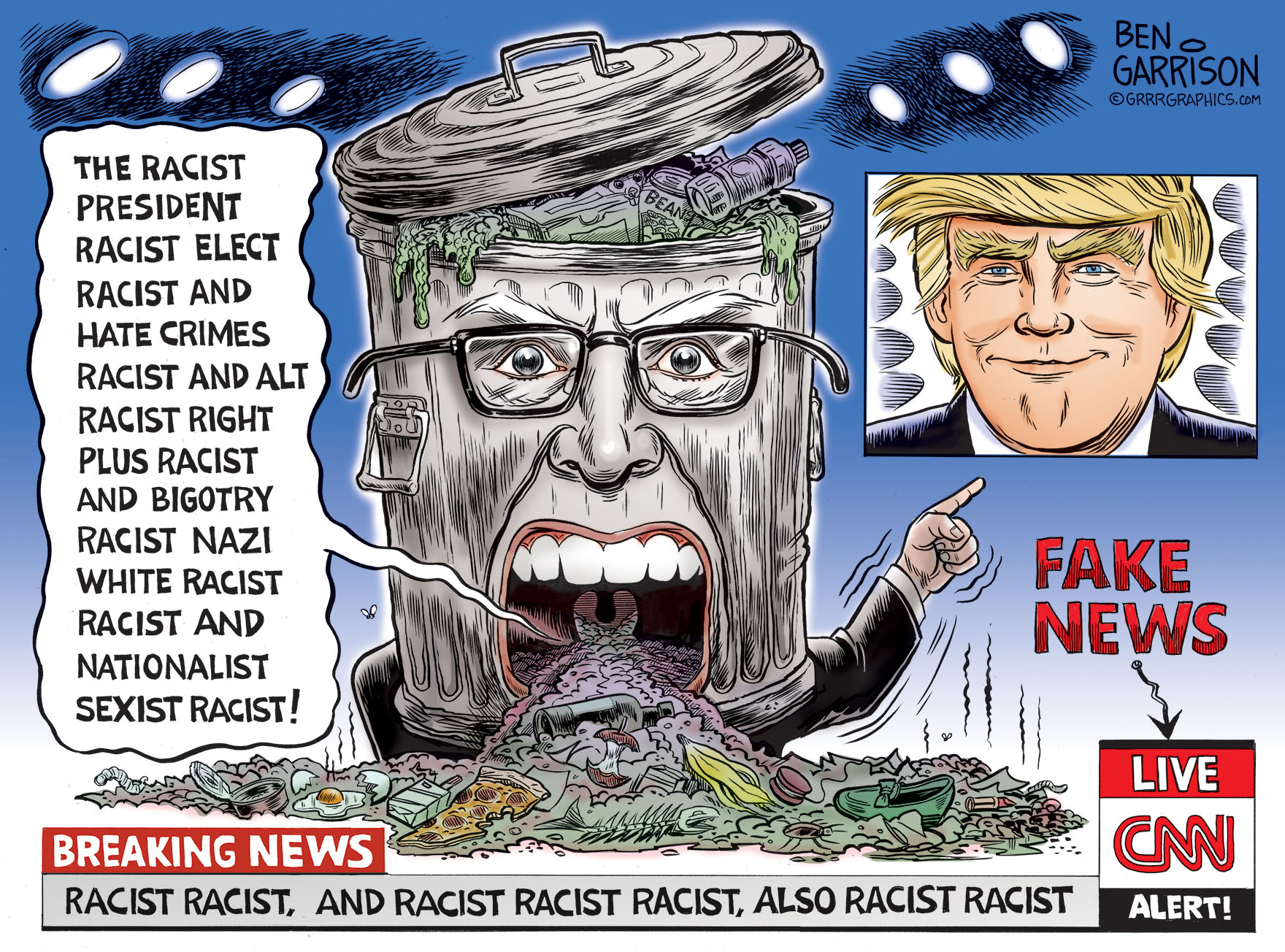 I was listening to CNN the other day while drawing this cartoon. They were driving very hard to the hoop by attempting to tie the alt right movement with Trump. Every other word they used seemed to be ‘racist.’
This is the crazy, name-calling atmosphere in which we now must all live and breathe. The country is increasingly being divided into two camps: Good and Evil. The liberals see themselves as the ‘good’ and claim the conservatives are evil, racist, Hitler-loving Nazi bigots. Naturally we on the right see good as being on our side. We’re disgusted when they send jobs overseas.
We can’t stand the rampant corruption and rigging of the game in their favor. We’re fed up with wide open borders. Hillary advocates an ‘open hemisphere,’ that is, anyone can waltz in and get free stuff while voting for Democrats. The lefties hope that an influx of ‘immigrants’ will vote to take away what freedoms we have left–especially our 2nd Amendment.
But I digress. During the election season, the alternative media whooped the ‘mainstream,’ in the ratings game. Young people in particular refuse to read newspapers or watch the globalist disinfo channels on TV. More people would rather check the Drudge Report or Zero Hedge than CNN. The mainstream has become the ‘legacy media.’
Therefore, the legacy media are panicking and attempting to paint the alternative media with a broad brush of Hitlerism. “Alt Right” suits them for that goal because it sounds vaguely like ‘Third Reich.’ Most liberals are carrying the propaganda ball on social media to spread the fear. They warn about ominous boogeymen on the alt right who are out to destroy liberal values. It’s a new form of McCarthyism. Literally. Hillary and the left are trying to spark a new cold war with Russia. There’s no reason America and Russia can’t be allied in trying to halt the spread of radical Islam.
But I digress again. I watched the streaming video from a convention center in Washington DC, where alt right personalities such as Richard Spencer, Peter Brimelow and Kevin MacDonald had gathered to speak their minds. Most there supported Donald Trump. This event was then used by CNN to smear Trump and drum up fear—usually involving some vague conspiracy about a Nazi takeover in America. Balderdash.
None of the speakers advocated violence. They expressed their views in a civilized and reasonable manner. I certainly didn’t agree with everything they said. But agree or disagree, it’s their right of FREE SPEECH. If it’s not protected, then it’s a matter of time before any political speech not approved by the collectivists gets shut down. Obama has already hinted that he wants this. He claimed the Internet had become the ‘wild west’ and that order was needed. The New World Order, of course. “Folks need a place where they can find the truth,” he said. Places such as CNN, right Obama? Sorry, that won’t work anymore. That’s why he’s anxious for an Internet that is ‘controlled’ by a globalist bureaucracy. It will be set up to demonize and shut down anyone stepping out of line. That’s why Obama was anxious to give away control of the Internet to his buddies at the UN.

Such demonization is already occurring. Twitter, Google, FaceBook et al., have started to silence those who aren’t in alignment with things such as open borders, climate change and ‘free’ trade. People can be shut down for disseminating so called ‘false news.’