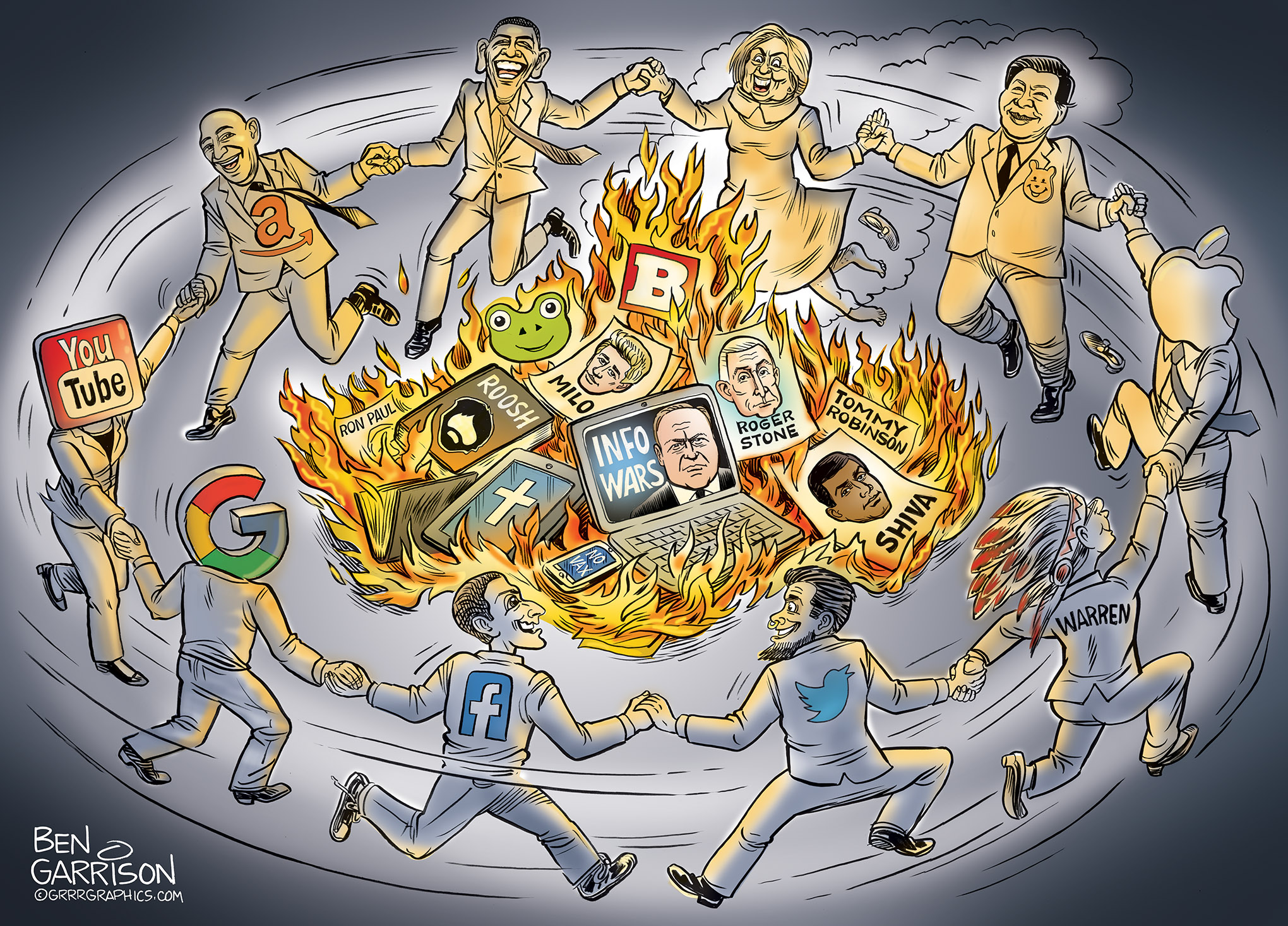 The authoritarian left continues to shut down free speech and they’re getting away with it.

Their latest victim, ‘Roosh,’ sold his books for years on Amazon. His books mostly proffered advice about picking up girls. It’s an unsavory subject to many—especially feminists—but it’s his free speech and he wasn’t advising anything illegal. Bezos suddenly pulled the plug on Roosh’s books—many which were selling well. Who’s next? Conservative cartoonist books because the content offends the left?

It’s often said that the Internet and social media are the new ‘town square.’ Realizing that, the left-leaning Silicon Valley controls and monopolizes that town square. At first they claimed to be equivalent to the phone company. They provided the platform and access and let the users add the content in the form of free speech. That’s now no longer the case. Clearly Google, Facebook, Twitter, and YouTube are skewing content in favor of the left.

A 60 minute video of  a 2016 meeting with top management at Google was released to Breitbart today, revealing their panic and dismay that Hillary had lost and Trump won. Google’s top executives, who preside over a company with unrivaled influence over the flow of information, are disparaging the motivations of Trump voters and plotting ways to use their vast resources to thwart the Trump agenda. Google is nothing more than Democrat propaganda and used to influence voters and swing elections.

Conservatives are banned based on vague and subjective terms such as ‘bullying’ and ‘hate.’

In the case of Alex Jones, they said he bullied families involved in the alleged Sandy Hook massacre. He didn’t. He did yell at a CNN reporter (a public figure) who was bent on silencing him. That’s not reason to shut down Alex’s free speech. Yes, Alex does indeed express hatred—for the globalist Deep State and the tyranny it brings. Yet he was also accused by the censors of being a racist, homophobic and other nonsense. His listeners know for a fact that those accusations are not true. Still, the authoritarian left pulled the plug on his social media and will probably try to de-person him altogether.

The Deep State and their collectivist media are trying to regain control of the narrative of what is true. They want to again control what people think. They’ve been losing the narrative and the argument. The only way they can win now is to censor conservatives and whistle blowers. It won’t end with shutting down our free speech. PayPal and banking services will be denied to those smeared as ‘hate speech’ purveyors. Not only will their social media access be blocked, their website domains will be pulled. This is probably one of the reasons Obama wanted to hand the Internet over to foreign, globalist hands.

What Silicon Valley wants is what China is developing. It’s a ‘social credit’ system that rates citizens based on Internet interactions as well as real life behavior. For example, jaywalkers will lose points and there are cameras everywhere to observe citizens. That’s why facial recognition is becoming a big thing. Bloggers who dare to criticize their communist tyrants lose a lot of points. Those with low scores aren’t able to travel. They aren’t able to buy property. They aren’t able to work. They aren’t able to engage in commerce or exchange digital money.

This is what the socialist, globalist left wants for America. A Chinese-style censored Internet and a scoring system that applies to the citizens but not those who own and control the data. We all need to speak out loudly against this—NOW! Otherwise, the voices tossed onto the lefty bonfire won’t end.