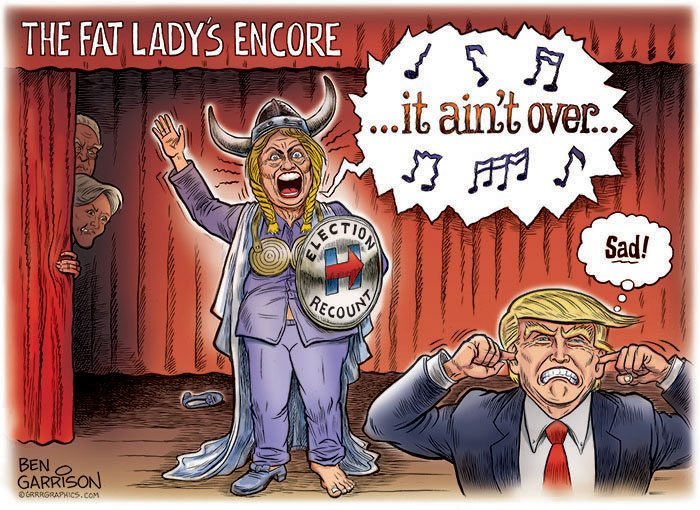 They say it’s not over until the ‘fat lady sings,’ and Hillary just won’t shut up.
Hillary has decided to join with Jill Stein and challenge the election. The globalist meddler and Hillary supporter George Soros is helping to fund it. This after she had earlier lectured Trump about accepting the outcome. She unctuously lectured him because she expected to win.

In the third presidential debate, Trump said he might contest the election if he found evidence of wrong doing. Hillary scolded him and said this: “We’ve accepted the outcomes when we may not have liked them. I for one am appalled that somebody in a major party would take that kind of position!” Hillary was horrified and got on her high horse to make a big deal of it.

In her concession speech she said, “We have to accept the results and look to the future. It’s time to give Donald Trump his chance to lead.” Apparently she lied. Again. What a shocker!
Hillary, you’re a hypocrite and you LOST. And don’t blame the Russians. It’s YOUR fault. Take responsibility for once.
It’s time for you to get off the stage and into prison.