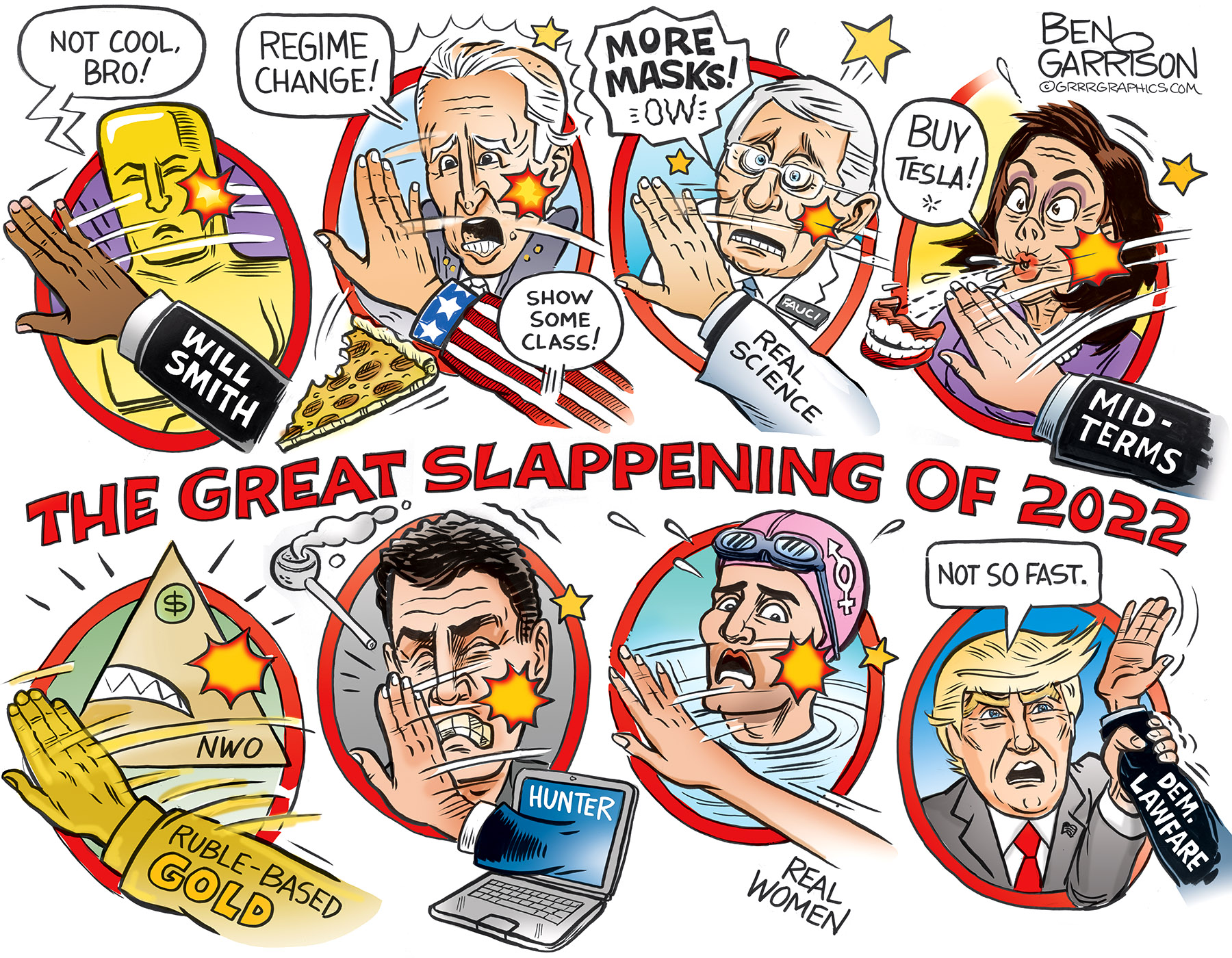 The Slap Heard Round The World

Will Smith gave Chris Rock a slap across the face because he didn’t like a joke Rock told about his wife.

Well, there are plenty of jokes in our government that deserve a good, hard slap also.

Will Smith won an Oscar for best actor, but his violence toward Chris Rock took center stage. It was the slap heard ‘round the world. Smith later apologized, but the damage to his reputation was sealed. Real men control their temper and avoid violence. Smith was right about one thing: His foul-mouth, violent display was ‘inexcusable.’ Will the Academy even invite him back next year? Probably. Smith should have hugged Chris Rock in forgiveness for the joke. How cool would that have been…

Who hasn’t wanted to punch Anthony ‘Mengele’ Fauci a good punch in his arrogant nose or slap the false teeth out of Pelosi’s mouth?

We would never do such things in person and we wouldn’t want anyone else to do them either. We control our instinct toward violence even as Big Government and Social Media slaps us in our faces with their censorship. Certainly comedians will not be telling any jokes about Smith and his family in the future. Freedom of speech was shut down a notch by Smith’s violence.

I decided to have some fun with this and do some slapping of my own. I am not condoning violence. These are cartoons and obviously all in jest:

Putin plays 3D chess while Sleepy Joe plays checkers with many missing pieces. The Russians have just attached their ruble to gold. To buy energy from Russia, the West must pay for it in rubles or gold. This is a slap in the face to the debt dollar and the central bankers who push globalism. Gaddafi was the last leader to try this when he put the Dinar on the gold standard. The bankers made sure NATO went to war against Libya. Gaddafi was whacked shortly thereafter and Hillary cackled about it. Biden talked about taking out Putin and he meant it because the Russian leader is an impediment toward the globalist New World Order that Joe promotes.

Hunter Biden is getting slapped by his own laptop. Both he and his dad are corrupt to the core. They are traitors who belong in prison.

Lia Thompson, a man who claims he is ’transitioning’ into a woman, has dominated college swimming. Real women, some of whom could be Olympic athletes, naturally resent this and they probably resent seeing his male genitalia in the dressing room. I don’t want to hurt anyone’s feelings, but a man simply cannot become a woman and I will not participate in such delusions being pushed by Marxist teachers, globalists, and the media that constantly praises it. A man can mutilate himself, but that doesn’t make him a woman. This perpetual ’trans’ stuff is nonsense and when men utilize it to dominate female sports…well, it’s simply cheating.

MAKE A ONE TIME DONATION- KEEP CARTOONS ONLINE- WE ARE 100% FUNDED BY YOU! CLICK TO DONATE and Support Ben’s Work

The Democrats continue their attempts to slap President Trump away from his next presidential run. The ‘lawfare’ by the Democrats has been constant and now they want to arrest Trump and charge him with some invented crime in order to keep him running in 2024. If the election is fair this time, Trump will crush any Democrat and they know it.

The desperate Democrats know nothing can stop the big slap that is coming, and it’s coming for them.