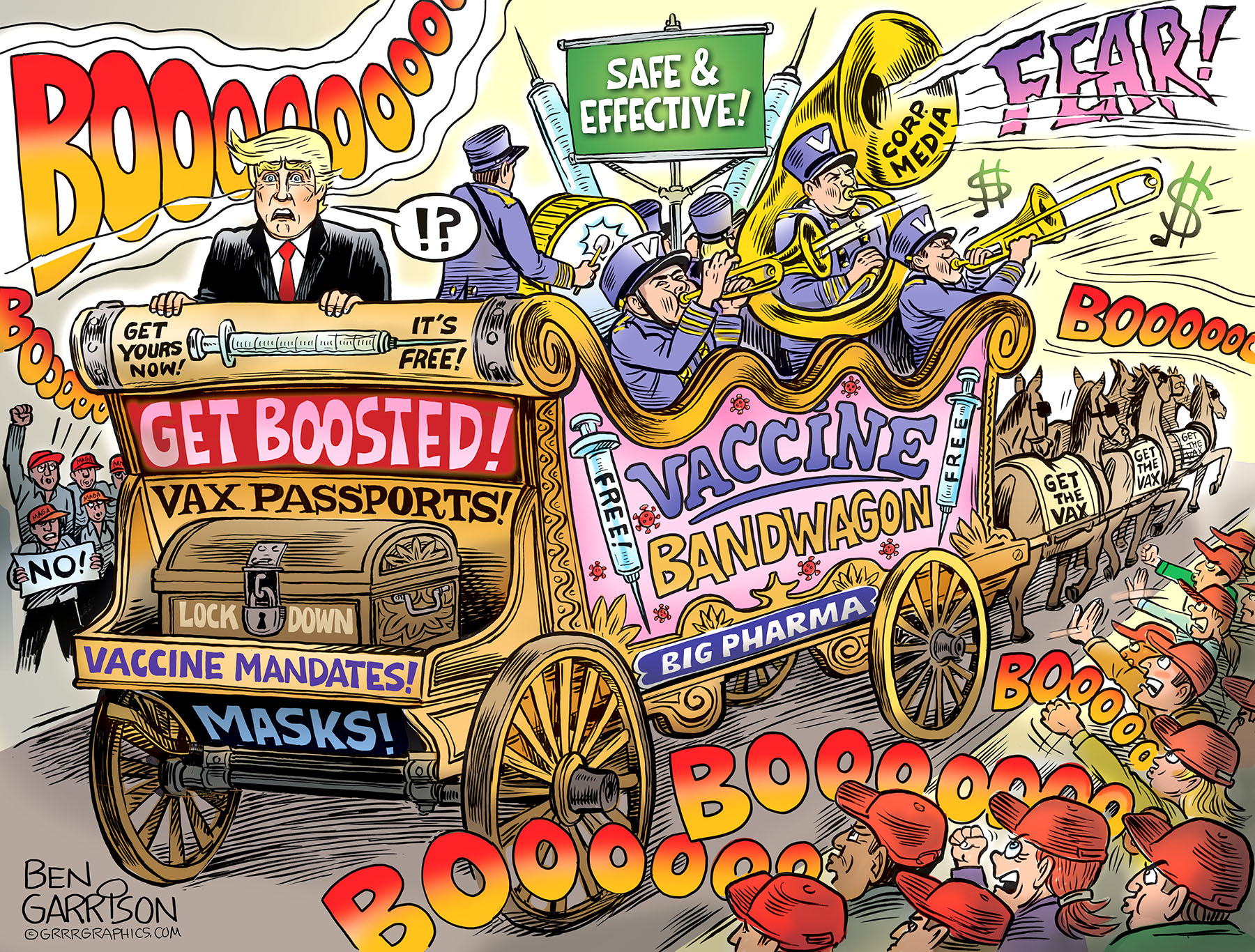 Jump Off the Vaccine Bandwagon

President Trump and Bill O’Reilly have been on a speaking tour. Both talked about being fully vaccinated and boosted. Trump was booed and he seemed surprised. I’m surprised that he was surprised. Has he grown out of touch with the people who helped elect him?

Trump has bragged about rushing out the Covid vaccines by means of his “Operation Warp Speed.” As it turned out, the vaccines aren’t even vaccines—they are experimental gene therapy drugs and not adequately tested. Not by a long shot. They repeatedly failed during animal testing, but somehow they were still rushed to market. Trump wanted to save people. He wanted to be a beaming hero.

Normally such drugs are tested for at least ten years before they are injected into humans, but Big Pharma wanted to take advantage of a drummed-up crisis in order to quickly rake in endless billions of dollars from the taxpayers. The pokes were promoted as ‘safe and effective,’ but now we know they are both dangerous and ineffective.

Thousands have died from the Covid jabs and millions have experienced adverse reactions. Big Pharma owns most of our politicians and our media. The latter won’t do real journalism because they don’t want to risk losing advertising money. It’s not about health or even science. It is about profit, control, tracking, and power.

Trump thinks he helped save millions of lives, but it’s more likely that he has had a hand in harming millions by means of the clot shots. We don’t know how many more will die in the future due to the Covid injections. The virus variations and boosters will be endless. I predicted the shots and the mask wearing will never end as long as people continue to put up with the scam. Before his regime stole the election, Biden said he would unite Americans. Instead he has divided us—the vaccinated vs. the unvaccinated. Sleepy Joe treats the latter like lepers from ancient times. I can’t think of another political cartoonist who has done more to support Trump than I have. The vast majority of my Trump work has portrayed him in a positive light. I remained a Trump supporter even after I was disinvited to Trump’s Social Media Summit. His staff believed the blatant lie that I drew anti-Semitic cartoons and that was that. I have never penned a racist or anti-Semitic cartoon, but I was humiliated in the mainstream media anyway. 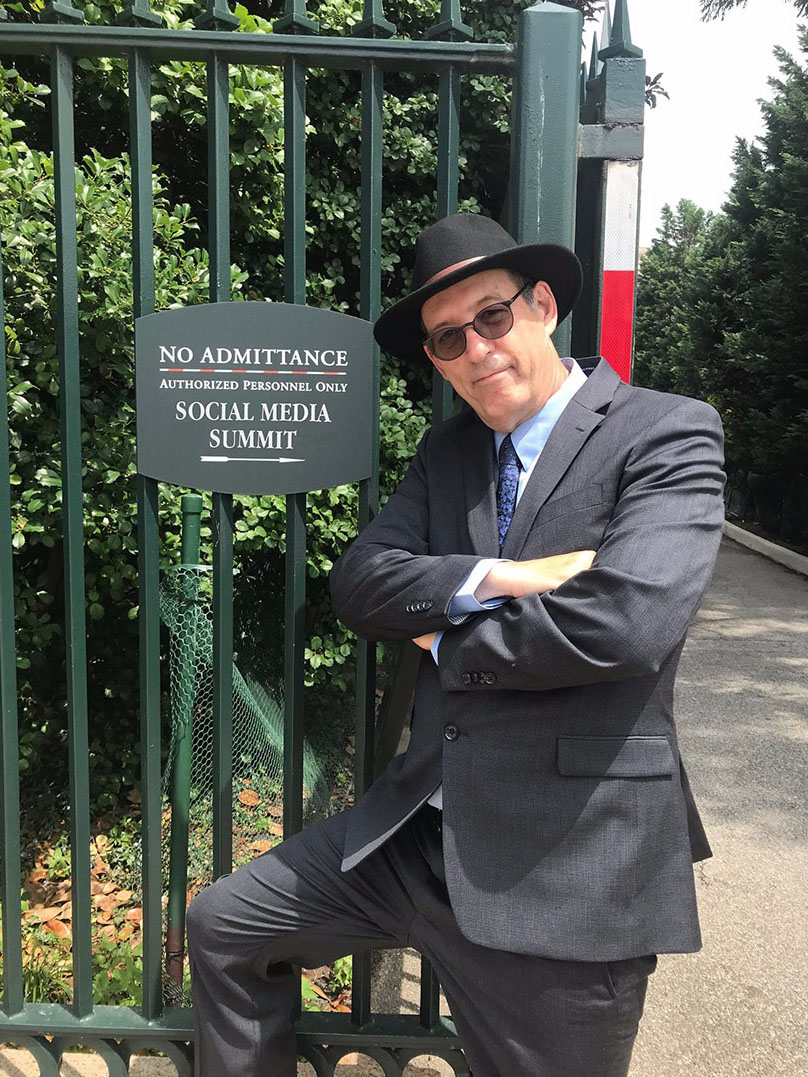 Regardless, I tried to rise above it. Trump believed in ‘America First’ and that remains important to me. Trump wanted to repair decades of damaged that was done to our country by the likes of Clinton, the Bushes, and Obama. Trump wasn’t a puppet of the globalist tyrants. So I continued to support him even though I was angry that he failed to pardon Julian Assange. He failed to withdraw US troops from Afghanistan. He failed to drain the Deep State Swamp, but at least he made people realize that it existed. Trump’s accomplishments were myriad and impressive—especially considering the constant hostility he faced from the Democrats, the Deep State, and the anti-Trump propaganda media.

All that said, Trump is dead wrong about the vaccines. Yeah, I know he claims they should be voluntary, but that’s not enough. He should be denouncing those who are calling for mandatory vaccination. People should not have to choose between dangerous injections and a job. He should denounce vaccine passports and the slave masks. The push to get children vaccinated is completely disgusting. They are nearly immune from Covid and the clot shots could greatly harm the development of their immune systems—yet Trump says nothing. People are getting harmed, but corrupt Big Pharma needs billions of dollars more, so their deadly clot shots continue to be pushed. Even on Fox News. Even by Trump.

We need to figure out how to get Trump off the Vaccine Bandwagon. Why has he aligned himself with monsters such as Gates, Fauci, and Biden? Right now he’s hearing boos from crowds when he talks about how safe and effective ‘his’ vaccines are. Many in his crowds know they are unsafe and obviously ineffective. I urge those crowds to boo louder no matter who is telling them to get vaccinated.

“I have not turned on Trump. One critical cartoon does not constitute a turn. I disagree with him about vaccines and I want him to step off of the Big Pharma bandwagon.

They say I’m ‘controversial.’ Why? Because I’m one of the few drawing conservative, America-first cartoons? Why should that be controversial?”

Also available in a smaller size print- click to order 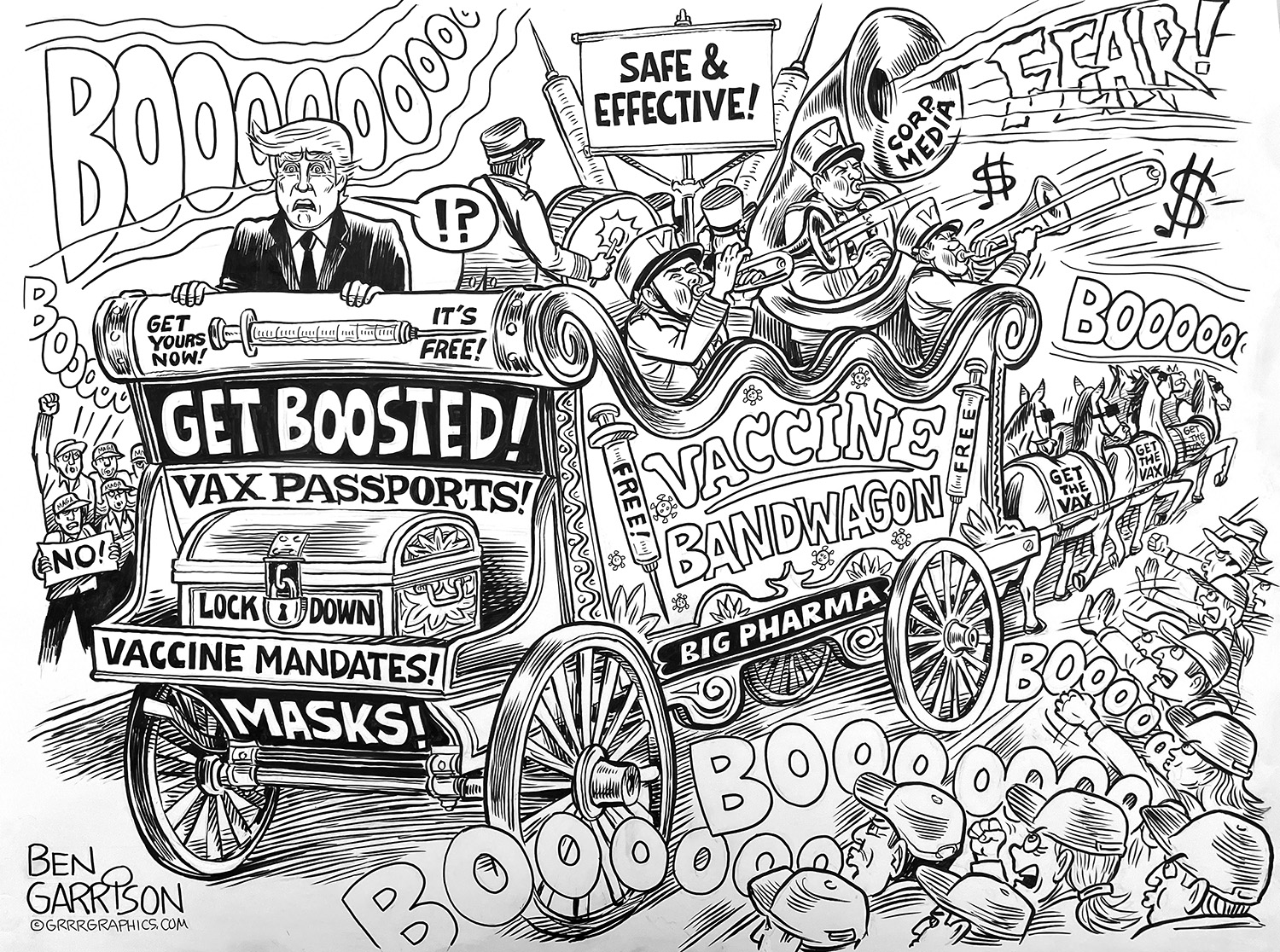