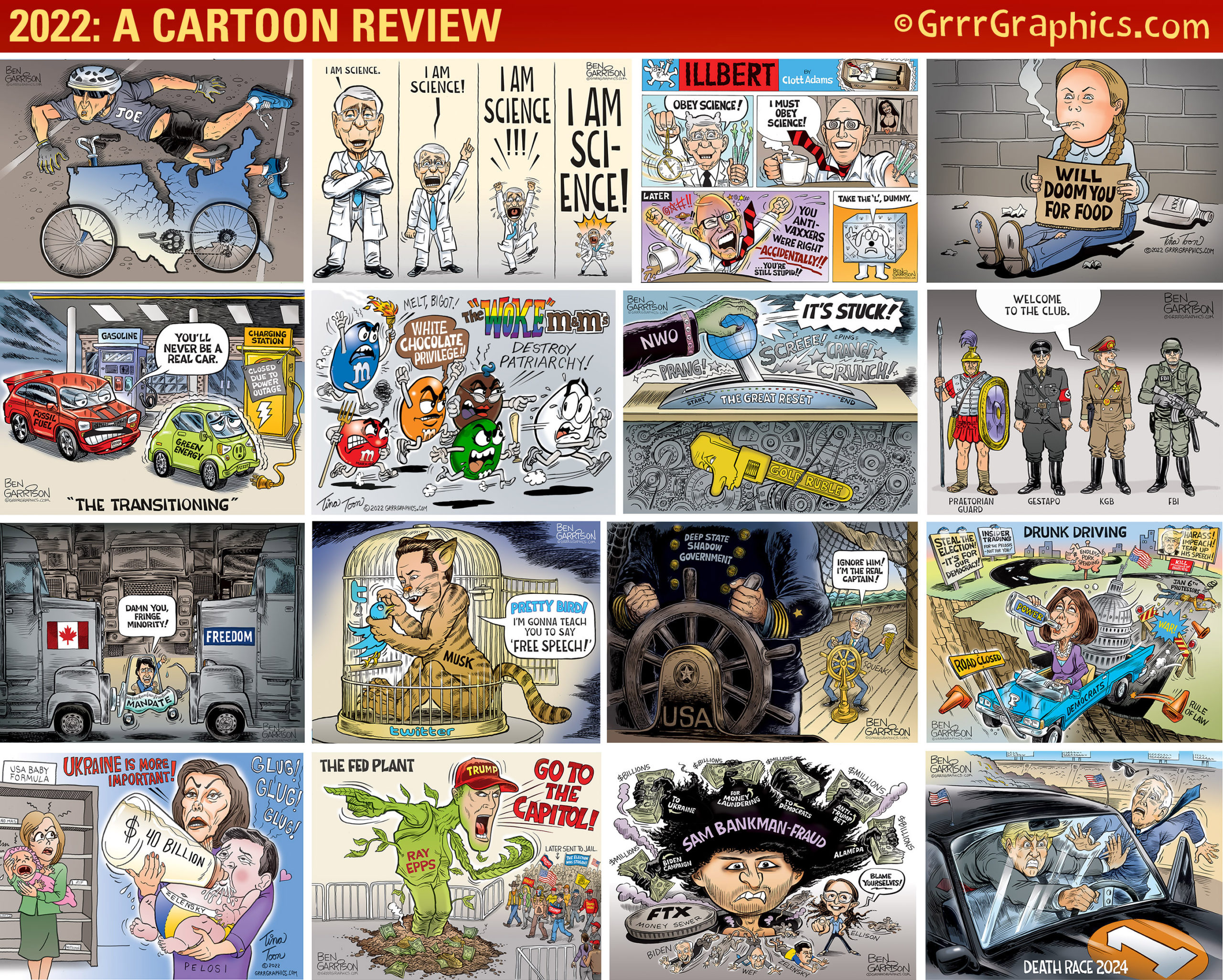 We at GrrrGraphics (Tina and Ben) have drawn quite a few cartoons in 2022.

Some were home runs, some were base hits, while a few others were strike outs. We try to keep the strike outs to a minimum, but the news is always changing and sometimes we don’t get things quite right. For example, I drew Zelensky in a suit in one cartoon and later I discovered the man prefers green t-shirts. He even showed up in front of Congress wearing one. Fortunately the Ukrainian con man has plenty of pockets, into which he receives an endless supply of our tax dollars. Anyway, we try to do our best with short time frames to keep our cartoons fresh and newsworthy. It’s best not to dwell on past failures, but rather we anticipate future success, which is made possible by our supporters and those who help us gain reach with our cartoons—especially after we were banned by Twitter and Facebook.

First row, from left to right:

• Biden crashed his bike in June, but it’s symbolic of his entire presidency. Instead of a bike, Biden seems determined to crash America and he has made great progress including wide open borders, collapsing the economy through ‘green’ spending that sparked massive inflation, the transitioning agenda and gay-ification pushed on young children in school, the pervasive ‘woke-ism’ being spread everywhere including our military, and ultimately…his push for nuclear war with Russia. Biden is rolling with quite a few broken spokes.

• Anthony Fauci said he’s retiring at the end of 2022, but it’s doubtful the medial megalomaniacal sadist will give up the limelight. He wants to be worshipped as the epitome of science even though he has killed millions and profited by it. Not to mention the beagles he helped torture.

• Too many smart people listened to Fauci and the medical industrial complex and accepted a rushed out, ‘emergency’ gene therapy jab. It was based on lies and it cost lives. Many arrogantly bragged about getting the so-called ‘vaccination’ along with the boosters and they are now regretting it. One of those was Scott Adams, the creator of “Dilbert.”I decided to draw this featured parody cartoon. In 2022, it was confirmed that the jabs did not prevent Covid, did not stop the spread of Covid, and in fact harmed a great many recipients with severe side effects including blood clots and myocarditis. Many continue to ‘drop dead.’

• A young fanatic who claims science is on her side is Greta Thunberg. Now that she’s aging, the novelty of her climate change exhortations have worn thin. The polar bears aren’t dying. The ice caps are not melting and the seas aren’t engulfing cities. The sun is the biggest driver of climate change, yet the ruling class who controls Greta never mentions it. How dare they!

• The anti-science ‘transitioning’ craze was greatly pushed by Biden and his string pullers, and they even applied it to cars. They want us to transition from internal combustion engines to electronic vehicles or “EVs” in order to help save the planet. The problem there is a battery-driven vehicle has very limited range and it requires a vast amount of pollution to produce the batteries. Disposing of the batteries is also ‘problematic.’

• Too many corporations, including candy makers, are pushing the ‘woke’ agenda, which might be called the ‘wreck’ agenda — as in wrecking our history, pulling down statues, dividing everyone along racial lines, and destroying American culture. No white chocolate M & Ms! That would be ‘racist!’

• By invading the corrupt globalist whorehouse known as Ukraine, Putin tossed a monkey wrench into the globalists’ plans, thus bending their gears and agenda of bringing about a ‘great reset.’ Since Putin also tied the ruble to gold, let’s make that a golden monkey wrench. The ruling elite can’t stand it when they can’t control countries with their debt dollar—hence their use of the US and NATO to escalate the war.

• The FBI has joined historical security arms such as the Gestapo and KGB by becoming the enforcers—the muscle—of the Democrat Party and the Globalist Deep State Swamp.

Join us in the fight to SAVE AMERICA! Give me liberty or give me death! United we stand-together we win! You can help with a monthly donation to support our work on SubscribeStar-  Click to view!

• Early in 2022, Canadians finally pushed back against the tyrant Trudeau by conducting a massive trucker strike in Ottawa. They protested Trudeau’s vaccine mandate as well as the rest of the Covid claptrap, so the ruling class decided to freeze and seize the truckers’ bank accounts. That’s why the globalists want to implement CBDCs. A digital currency can be tracked and cut off. Any slave disagreeing with the very top of the pyramid can have their money stolen in a flash. They want obedient slaves, not protestors.

• One of the biggest ongoing stories of the year was Elon Musk taking over Twitter. We then got to see just how corrupt the company really was. It was infiltrated by FBI ‘glowies’ who closed down conservative voices. The Uniparty in Congress is rewarding the FBI by giving them raises and buying them new headquarters.

• We all know the manikin in-chief, sleepy Joe Biden, is nothing but an ice cream licking, stumbling, mumbling, doddering, sniffing figurehead. The real captain is the Deep State Shadow Government. We are getting wheeled toward their destination of of tyranny, also known as neo-feudalism.

• Nancy Pelosi is fueled by her furious hatred of Donald Trump. Like her husband, she’s fond of drinking—but she’s even more fond of power. She has abused that power by helping set up a trap on January 6, which resulted in hundreds of innocent paraders getting sent to a brutal prison without due process. She’s drunk on power. Pelosi and her hammering husband Paul, got rich from government. Nancy is a good reason why we must have term limits.

You can Support our work in 2023 with a donation! Keep Ben Drawing and donate today! Click Now

• Speaking of drinking, here is Pelosi’s baby boy, Zelensky, getting as much bottle as he needs. At the time Tina drew this the Ukrainian shake-down artist had already taken us for $40 billion. Now it’s over $100 billion with no end in sight. Burp!

• Meanwhile Pelosi’s rigged January 6 Committee failed to bring up the biggest loudmouth at the Capitol protest: Ray Epps. He was an obvious FBI plant and many called him out on it at the time. He directed traffic and used a bullhorn to urge people ‘in’ to the Capitol. He is now protected by the FBI in Arizona. Remember, the FBI are like roaches—where you see one you can bet there are many more on the scene. Their main job nowadays is entrapping conservative Americans and putting them in jail.

• The Sam Bankman-Fried situation eclipses all other financial scandals. It’s bigger than Bernie Madoff or Enron. The young man lost billions of dollars and abused the trust of investors. Here we show him rising from the financial sewer along with rats who benefited from his ‘donations.’ One of those rats is Zelensky. Money was sent to Ukraine and was laundered by them and sent back to American rat holes.

• The January 6 Committee heard testimony about Trump trying to take the limousine wheel and steer the vehicle toward the Capitol. It was ridiculous hearsay and no way based in fact. It didn’t happen, but can Trump take the wheel away from Biden in 2024? That remains to be seen. If our elections aren’t fixed, then we can expect Biden and his operatives to steal the presidential race once again.

The ‘Drain The Swamp’ Signed Prints Bundle! Two Prints for a big savings!