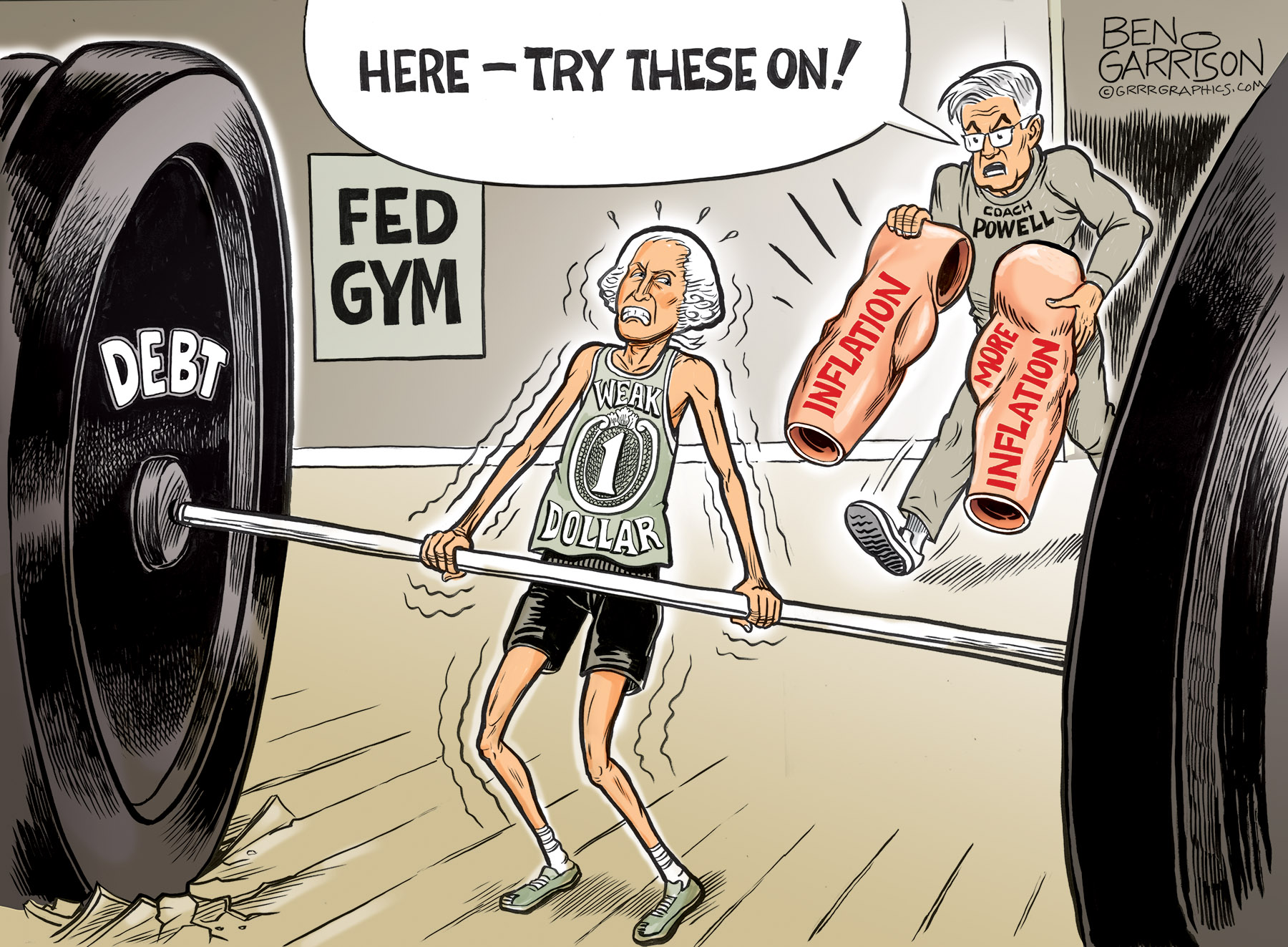 In America we have a national debt well over $20 trillion. By 2030 it will be nearly $90 trillion. Our current unfunded liabilities tops $149 trillion. Biden has distributed trillions of dollars to compensate for lost jobs when small businesses were destroyed during the lockdowns. Congress routinely spends trillions of dollars on pork and they won’t tighten belts any time soon.

The Fed’s solution is always the same. Print more dollars. A problem occurs with that. It’s not like printing Weimar or Zimbabwe money backed by nothing. We have not a fiat dollar, but a debt-based dollar. That means it must be paid back with interest. That’s impossible because the public is not allowed to have a printing press. Counterfeiting is against the law. Only the private central bankers can print and the more they print the more debt is owed to them and those who buy government bonds. Workers pay taxes on their labor to pay interest on the debt, but the principle can never be paid back. We’ve long passed the point of no return on that possibility.

Essentially we have become tax slaves to the entities who have indebted us. People slave away for a rotten, immoral system of money for nearly a third of the year while the ultra rich have tax shelters. Global corporations pay little or no taxes. It’s always the little guy who gets punished. It’s a rich man’s game and they’ve shackled our country with debt money.

oin us on SubscribeStar, an alternative to Patreon for supporting your favorite “star” Click to view!

Inflation is getting worse. Food prices are skyrocketing along with home and rent prices. Gas prices are rising. Big government won’t halt their profligate spending, but the little guy will be forced cut back. No wonder many aren’t returning to low-paying jobs. Wages are not keeping up with inflation and if one has a choice between making money from a government dole or working for the same amount, they will choose idleness every time. Biden doesn’t seem to understand this.

We won’t see people pushing wheelbarrows full of money about any time soon. Weimar Germany had a law that stated wages needed to remain commensurate with the inflation rate, which soon rose exponentially. In America the debt dollar will prevent wheelbarrow cash, but people will get poorer regardless. It’s a good idea to have some precious metal as well as long-term storable food at this time.

Frederick Bastiat once said, “Government is the great fiction, through which everybody endeavors to live at the expense of everybody else.” People need to give up the notion of government redistribution of wealth. That socialist road leads to a dead end. Human beings are not equal and can’t be made equal without absolute totalitarianism. Forced equality by means of socialism always leads to ghastly suffering. It’s time to end our dependency on government. It’s time to end the Federal Reserve and return to sound money based on precious metal.

IS AMERICA WORTH SAVING?

We think so! If you are ready to help save our country from the traitors in the White House and Congress, please help keep our cartoons online with a donation at our support page. We are being hit by daily attacks on our website and our business- we need your support to keep GrrrGraphics online- Big thank you to all who have supported us over the years- we draw for you! Click YES Below to make a donation today!