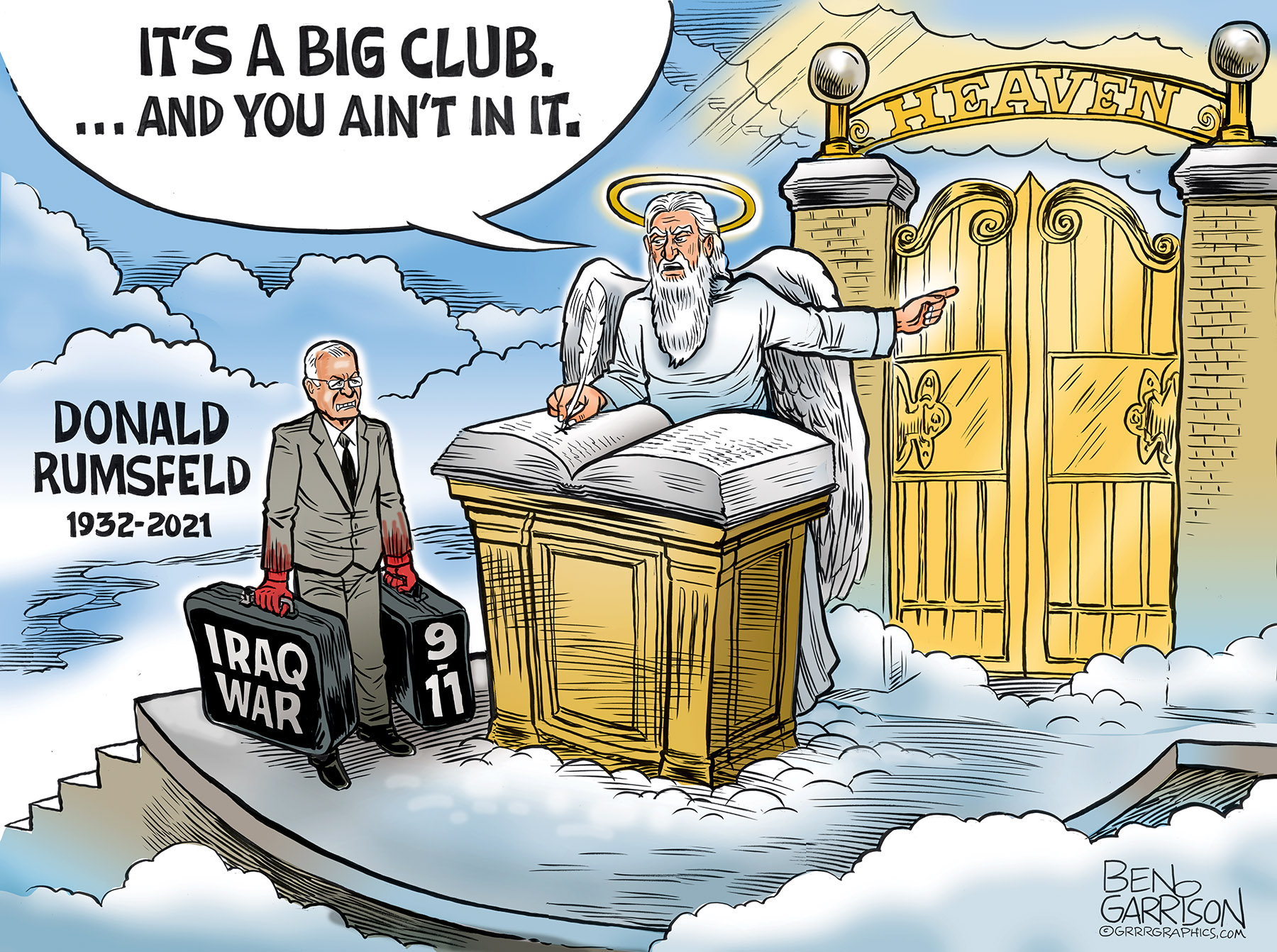 Sorry, You Can’t Come In

I’m not celebrating Donald Rumsfeld’s death, but I definitely wouldn’t celebrate his life.

The former Defense Secretary was a war monger who shared responsibility for the death of over a million people in the Middle East. Along with President George W. Bush, he claimed Saddam had weapons of mass destruction, which was a complete fabrication used to justify endless war as well as further enriching the military industrial complex.

Building 7 was intentionally imploded. The fire in the building was nowhere near hot enough to melt steel beams. 9-11 was an inside job and Rumsfeld was no doubt involved along with his fellow RINO, Dick Cheney. The event was used to take away freedom and provide an excuse for war. Just one day before the buildings came down Rumsfeld  admitted that 2.3 trillion dollars went missing from the Pentagon. This was conveniently forgotten after the 9-11 ‘attack.’ Nowadays trillions of dollars go missing as a matter of course and nobody cares. Certainly not the compromised legacy media. Rumsfeld helped make that corruption acceptable.

Rumsfeld raked in millions of dollars from high-paying corporate positions when he was not politically employed. Was it payback? Remember Comey helping the Clintons out of a scandal? He was rewarded with a multi-million dollar job at Lockheed. Rumsfeld enjoyed the same treatment. Even worse: ‘Rummy,’ while CEO of Searle, used his political connections to rush through a poisonous sweetener known as ‘aspartame.’ He was rewarded with a $12 million bonus for getting the deadly substance on the market.

Both the political and corporate world greatly benefitted Rumsfeld. When he left the Bush Administration he was already worth over $100 million. Some say he was worth over $200 million. Isn’t it funny how all the globalist players get fabulously rich after pushing the New World Order goals….hmmmm.

f you wish to help win this battle, save our country, and restore renewed faith in patriotism, please consider our 4th of July sale! Use the coupon code:”fourth” to save 35% ON EVERYTHING ALL WEEK LONG. If you don’t own a Ben Garrison original cartoon or a special edition print of your favorite cartoon, now is your chance! Just click on the link below now to pick up your cartoons, prints, and books at this historic price.

Your purchase goes to support our country, the MAGA movement, and the REAL President, Donald J. Trump!