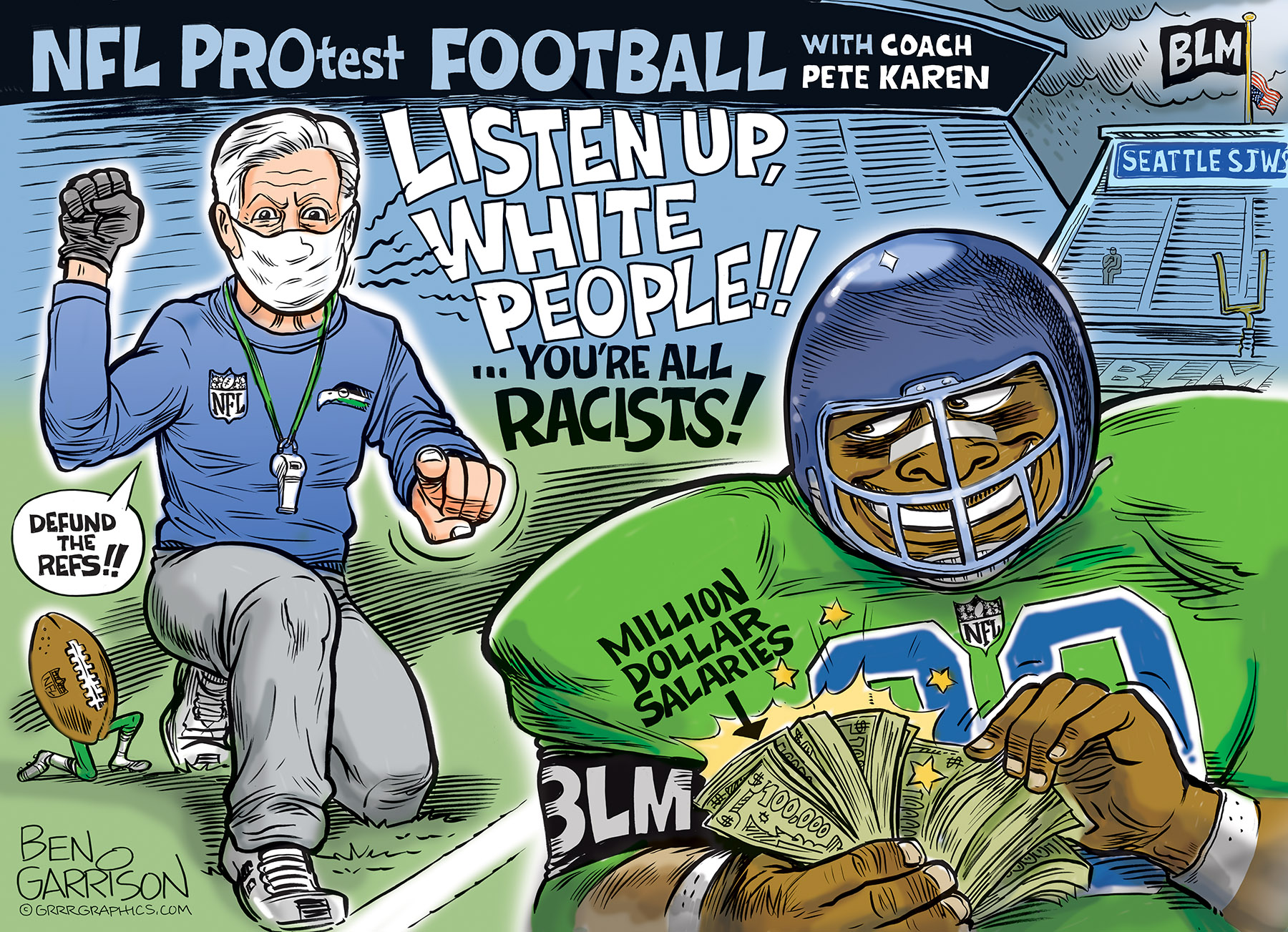 In a rambling display of virtue signaling, Seahawks head coach Pete Carroll complained whites weren’t listening to blacks. The lecturing ‘Karen’ then blathered on about how white folks needed to learn ‘real history’ and that slavery has never gone away. Well, Pete…we do know that over 600,000 mostly white lives were extinguished during the Civil War that ended slavery, but apparently that bit of stark history wasn’t real enough for you.

The politicization of professional sports in America is just part of the communists’ game plan. The Bolshevik Democrats are using the racial divide during an election year to usher in their figurehead, Biden. If elected, the socialists will again be on offense. They will drive to further destroy our Republic and our freedom. Coach Carroll can’t see this because he’s been brainwashed by the leftist media and the systemic political correctness that has long been embedded in Seattle. It’s one of America’s bluest cities.

The ubiquitous Black Lives Matter movement is not about black lives as much as it is about socialism. Pete said white people have too much money. Apparently he wants everything made more equal. If so, perhaps he should convince some of his multi-millionaire players to share a bit of their salary with the fans who can no longer afford to attend a game.

The NFL has been ruined by the left. Go watch an old football game on Youtube (pre 1975) and you’ll notice far less commercials and old fashioned hard-hitting football. Player safety wasn’t the paramount concern it is today. The game wasn’t slowed down by endless reviews and replays. Both black and white players did little celebrating when they scored touchdowns. They either dropped the ball in the end zone or handed the ball to the referee. Now we see elaborate hip grinding and self-aggrandizing, vulgar displays that make a mockery of the team sport. Pete’s racial screed added to the mockery.

NFL was already dying. There was too much kneeling and contempt for the fan base. Too many rule changes to favor ’safety’ dulled down the game. They didn’t want their star millionaire attractions to get boo-boos. Instead of entertainment, the left saw sports as a means of ‘educating’ the public. Indoctrinate and accustom them to a socialist system. They want to change our ’national’ football league into a global one.

Thanks to the gum chewing and social justice-spewing Pete Carroll, the NFL is now dead to me. I will join a legion of other former fans and tune it out altogether.