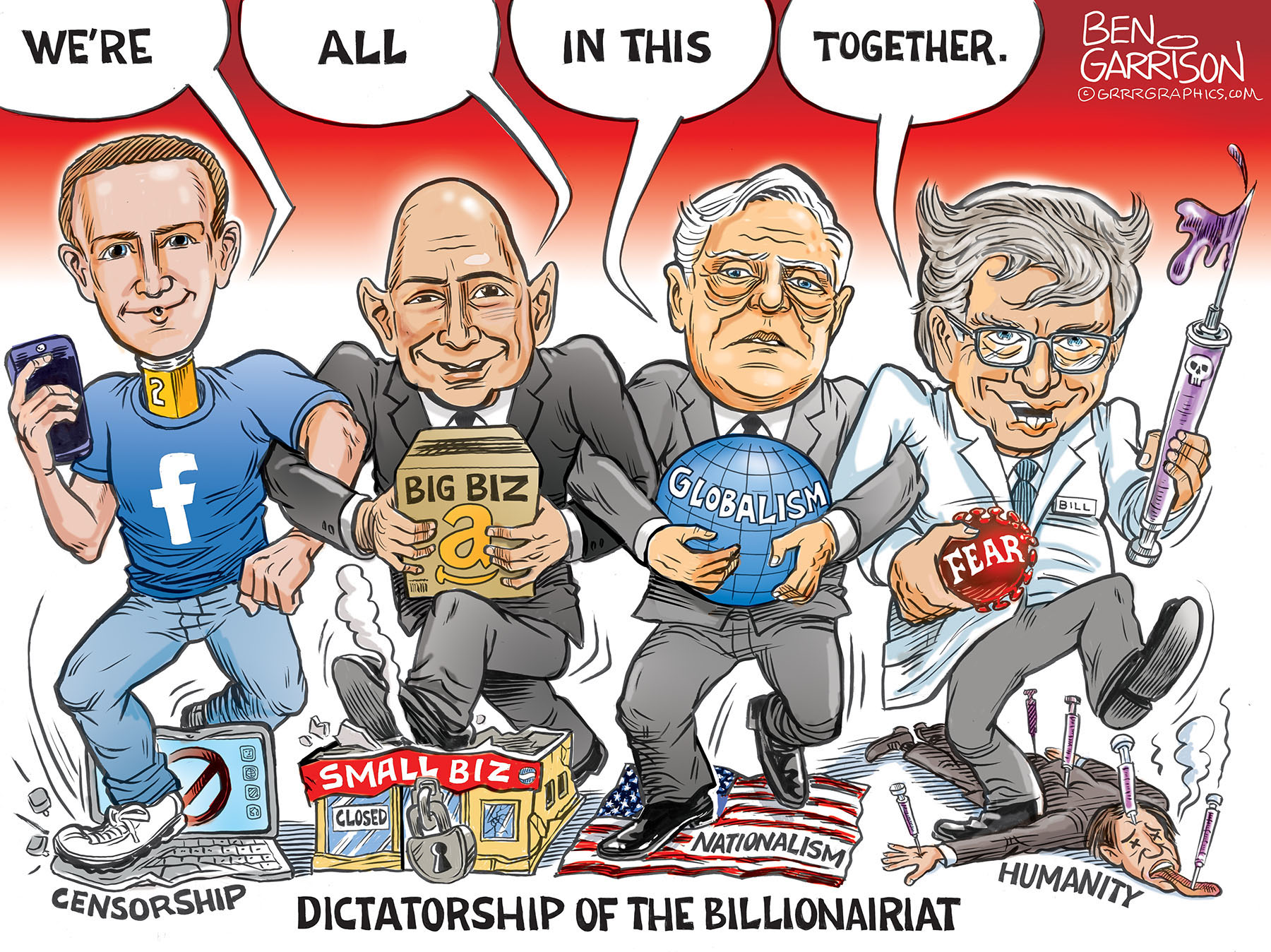 They are all in it together!

At the beginning of this scam-demic we heard over and over a line dripping with virtue signaling: “We’re all in this together.” Joe Biden said it. Endless commercials repeated it. But we are not all in this together. Small businesses have been crushed while select global corporations have remained open. They’ve flourished. Amazon, WalMart, and Target for example. The mega billionaire class got even richer while average Americans lost their jobs, their homes, their hope, and their sanity. The billionaire class received windfalls while the average family received a pittance.

Then we witnessed massive corruption at the voting precincts. The presidency was stolen outright. The Deep State Swamp and its host of mega-billionaires ignored the wishes of the American public and decided that Joe Biden should win. Why? After all, Joe wants more taxes and his running mate, Kamala, wants socialism.

It boils down to control. Karl Marx had an initial rule by leaders he called “The Dictatorship of The Proletariat.” He expected it to eventually ‘whither away’ and then the happy workers would work hard at what they do and live in utopia in perpetual peace and without government. His political theory grossly misjudged human nature. The communist party leadership in any country will never whither away voluntarily. It has never come close to withering. In fact, it always does the opposite. The communists running the show will always continually strive for more power and control over humanity. They say you can only vote in Communism once, the only way to vote it out is with a bullet.

Therefore, we know that the mega-billionaires want socialism for us as a means of better control for them. They’re the Dictatorship of The Billionairiat. Their vision involves complete power over the world down to a granular level. American patriots have always thwarted such plans, but unless Trump is restored to his rightful presidency, America as we knew it is lost. An Orwellian police state is at our doorstep.

President Trump interfered with plans long-set by The Billionairiat. Though a billionaire himself, Trump wasn’t part of their ‘Big Club.’ Here is a man who rightfully should have been looking forward to spending time with his family, golfing, and enjoying life in Florida. Instead, Trump knew his country was in dire straits—especially after the destruction wrought by the red diaper baby, Obama. Trump’s patriotism compelled him to do his duty. He offered a refreshing and restorative nationalist vision of “America First.” He wanted to ‘Make America Great Again.’

The globalist Billionairiat are pulling the strings not only on the current scamdemic, but also on Biden and Kamala. Hillary and Obama, too. A great many corrupt politicians do as they’re told. The Billionairiat meets regularly by means of private meetings and forbids any scrutiny by the public. A compliant mass media, owned by The Billionairiat, largely ignores such events.

I couldn’t fit them all in my cartoon. Tim Cook, the Apple CEO, is delighted that China Joe became the president select. He desires better ties with the Chicoms so he can leverage their slave labor for his company. President Trump is the only president in recent history to stand up the the Chinese. Bloomberg is also part of The Billionairiat and he wants your guns. He spends millions promoting gun control and the destruction of our second amendment.

Then comes Mark Zuckerberg who spent millions trying to influence this year’s election. He also made sure that political speech on his Facebook was to his liking. Anything he didn’t like was subject to blatant censorship. A man who limits another man’s free speech (especially political free speech) is a traitor to our country. Mark is good friends with President Xi.

Jeff Bezos bought out the Washington Post in order to use it for his personal anti-Trump blog. He cleaned up with orders from a locked-down nation. Coincidence?

George Soros has long stirred up trouble. He funded the BLM and Antifa. He buys elections for his selected candidates, even at a grass roots level. He chooses prosecutors and judges, therefore controlling our justice system. Soros wants America’s culture and pride gone. He wants chaos on our streets. He thinks that will make it easier to usher in his New World Order socialism. Soros should be arrested for funding terrorism.

Finally we have Bill Gates. I heard CNN refer to him as ‘the pandemic expert’ today. He owns a lot of stock in the vaccine makers and funds many medical agencies, but money can’t buy him expertise. Even though he has no qualifications, we are supposed to blindly obey him and take multiple shots of an untested vaccine that could bring about a myriad of side effects—including death. The fake news media sends out a steady drumbeat of fear designed to prompt us to take the vaccines voluntarily. If that doesn’t work, they’ll try extortion. You won’t get your bailout check without a battery of shots. You won’t be able to travel or go shopping without a chip or card. Maybe you won’t get a social security check or license. If that doesn’t work, we’ll see brute force. It might come down to shots from needles or shots from a gun.

The Billionairiat can funnel almost endless money to further their goals. We didn’t elect them, but they think they get to decide our elections. Let’s lock up The Billionairiat, confiscate their wealth and distribute it to American citizens as a penalty for their traitorous mischief making.