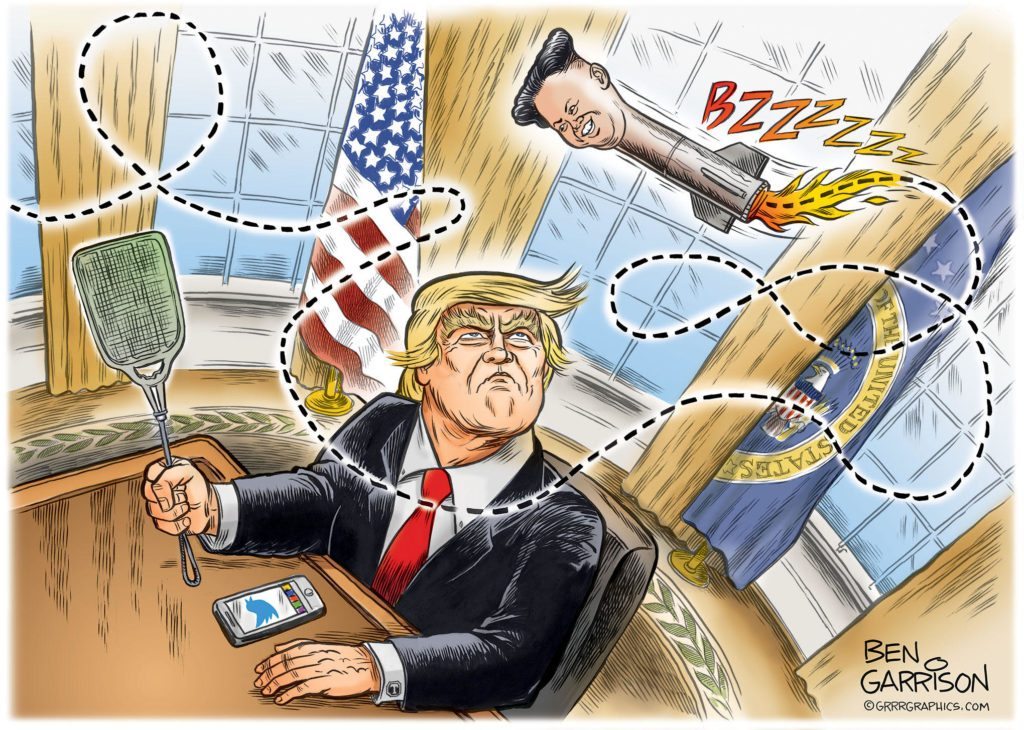 The North Korean situation remains dire. Kim Jong-un seems determined to provoke a war. If he fires a ballistic missile toward our coast it could very well trigger one. After all, we know he has the nuclear technology and has probably achieved the miniaturization necessary to mount a warhead on a long-range missile. His shrill saber rattling is now backed with a very real and dangerous threat.

Our previous presidents seemed content to kick the North Korea problem down the road. Their efforts at diplomacy proved over and over again that appeasement does not work. Clinton sent Jimmy Carter to negotiate a peace agreement with Kim Jong-il in 1994. We gave his regime $5 billion in aid and two nuclear reactors in exchange for their promise to not develop nuclear weapons. The sanctimonious Carter won the Nobel Peace Prize for his efforts. (Obama also won the Peace Prize for nothing more than being the first African-American president, so we know that award has become meaningless). A few years later the North Koreans smugly admitted they immediately violated the agreement and continued their nuclear weapons development, yet even now the old fossil that is Carter still insists diplomacy will work.

TOON TROOPS! WITH YOUR SUPPORT AND OUR REVOLUTIONARY CARTOONS, WE WILL KEEP DRAINING THE SWAMP TO THE LAST DROP! THANK YOU.

Thanks to boobs like Obama and Jimmy Carter, President Trump doesn’t have many options. We can continue to ignore the saber rattling, which will probably lead to more nuclear testing and threats from North Korea. Apparently Kim Jong-Un wants to go out in a blaze of glory. He doesn’t want to end up like Gaddafi or Saddam Hussein. He deserves to be swatted like a fly, but if Trump does that, millions will most likely die.

Want to LOCK THEM UP? Ben’s new cartoon book is available now! Order your signed copy

Sign up at the newsletter first- you’ll thank me!