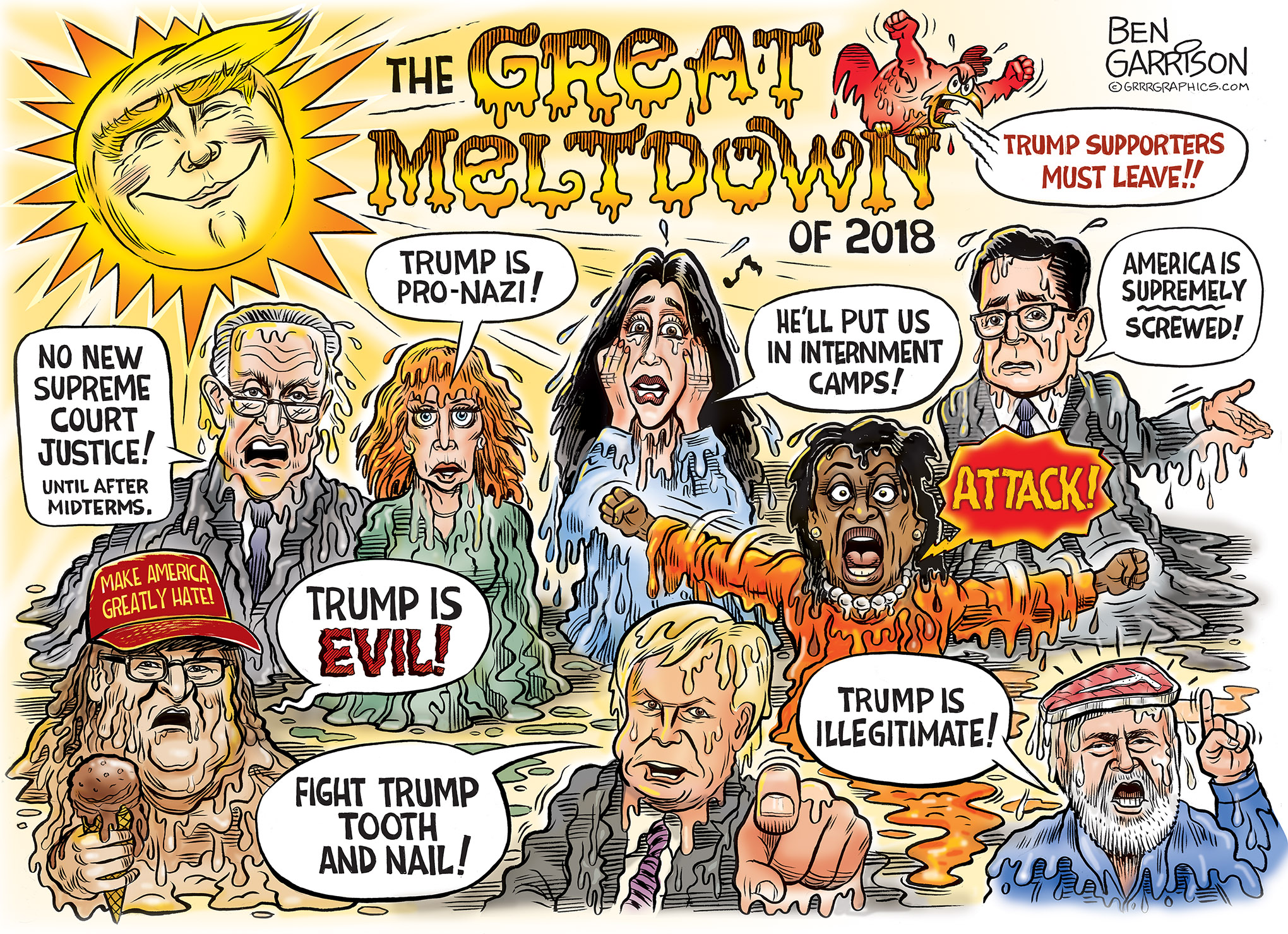 Interviewed by the Washington Post,  pop singer and Far Left Loon, Cher, was grave about the survival of the United States because of the “damage” she feels Trump has done to the country.

Another Lefty Loon, Rob Reiner (Or as we like to call him, Meat-Head) threatens the President. “The noose is tightening on the Criminal-In-Chief,” Reiner tweeted out to his nearly 530,000 followers. “And all the bullshit tweets in the world are not gonna save his racist ass.”   Can Meat Head just accept Trump is President and doing a great job?

We may be in for a long, hot summer. Our Gemini president sports a sun sign and right now he’s causing a major meltdown among the left.

They greatly resent the president’s success and now he gets to appoint another Supreme Court justice. Many Democrats, most specifically Chuck Schumer, want him to put that off until after the election. I added him and some other melters to this cartoon. If I added in all of the lefty tantrum throwers, it would resemble a ‘Where’s Waldo’ illustration. This features a select few.

Michael Moore has had enough of Trump. He wants to ‘go to war.’ Such talk seems at odds with his outspoken commitment against firearms, but he told Stephen Colbert “It’s time to put our bodies on the line to stop Trump!” In that respect he possess a formidable, if corpulent weapon. He also labeled Trump as ‘evil.’

Colbert lamented that ‘we are supremely screwed’ because the president gets to appoint another conservative Supreme Court Justice. Colbert pitched a hissy fit and said Trump would fundamentally change the course of the Supreme Court. Sucks to be you, Stephen.

Many in Hollywood imploded over Kennedy’s retirement. Rob Reiner called Trump ‘illegitimate’ and said Trump’s upcoming court pick was “tyranny.” Reiner was known as ‘meathead’ in the TV series, “All In The Family.”

The professional unfunny woman Kathy Griffin once held up a fake severed head representing Trump and joked about it. She now says Trump is ‘pro Nazi.’ That’s a real knee-slapper, Kathy.

Cher fears Trump will send her to a camp. That would make a great TV reality series!

Maxine Waters is in permanent meltdown mode. She may end up melting her way out of Congress. Even Rob Reiner said she went too far when she called for violence against Trump supporters.

The more Trump wins, the more the left makes collectivist jackasses out of themselves. Keep on winning, Mr. President.