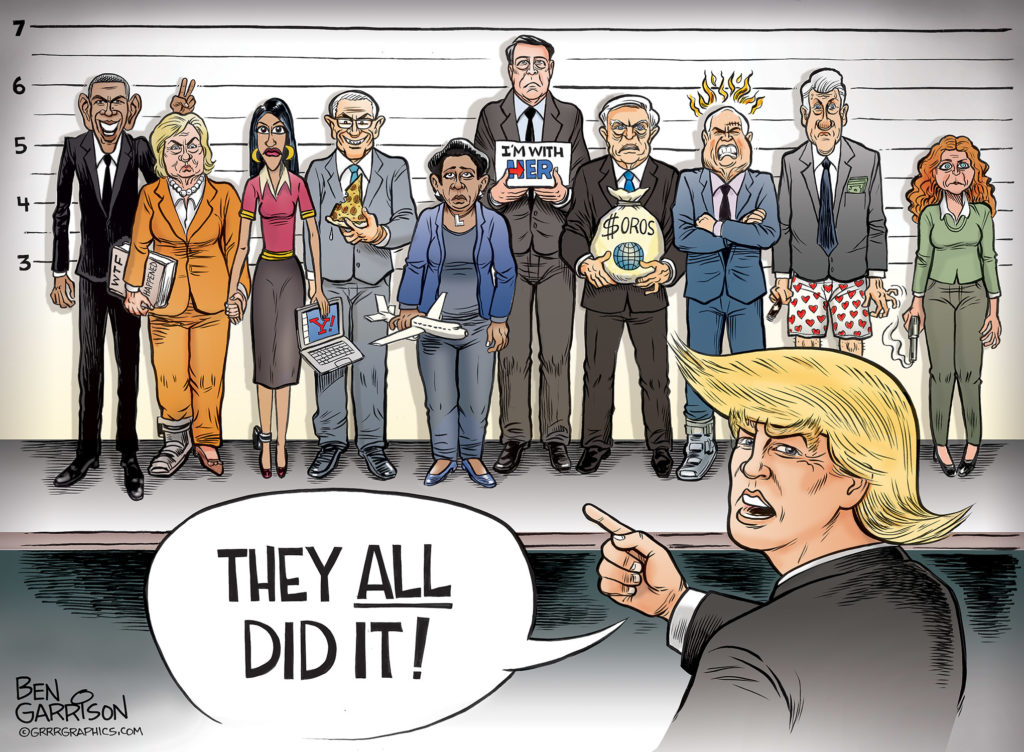 My latest cartoon features a police lineup. At such an event, the eyewitness chooses a perpetrator. In this case they’re all guilty. Here is a list of the perps on display:

A fraud who was elected despite a stolen social security card and phony birth certificate, he became our most divisive president in history. He tried his best to destroy America in order to usher in globalism (socialism) as ordered by his Deep State masters. The Criminal in Chief allowed the Fast and Furious scandal under Eric Holder to take place, which led to murder. He gave Iran hundreds of millions of dollars, thus allowing better funding of their terrorism. He illegally spied on the Trump campaign. Obama rode rough shod over the Constitution daily.

Her crimes are legion. A creature of the Deep State central banker complex, she’s well-versed in Alinsky tactics. She’s a sociopathic liar and cackling murderer. She had Gaddafi whacked, thus destabilizing that region. Her most recent crimes involve her private server on which she illegally kept classified email. She destroyed evidence, but always seems to be above the law. While Secretary State, she sold influence in a ‘pay for play’ scheme. Her Uranium One deal was a treasonous deal that put money in the Clinton Foundation coffers while allowing Russia to control 20 percent of our uranium reserves. That same Clinton Foundation cheated Haitian earthquake victims out of charity money. Her friend was arrested for smuggling kids out of Haiti as part of a child trafficking scheme. Satanism and pedophilia have become typical behavior among Deep State elites. Hillary destroyed evidence and promoted the big lie that Russia worked with President Trump to ‘hack’ the election. She helped fund what became the Russian ‘dossier’ on Trump, which was a complete fabrication designed to impeach the new president. Her behavior amounts to treason.  Investigate and liquidate the Clinton Foundation.

Recommendation: Arrest and jail at Guantanamo. Investigate and liquidate the ClintonFoundation.

Hillary’s best buddy and wife of convicted pedophile, Anthony Weiner. Hillary’s confidential email ended up getting copied to Huma’s laptop, to which Weiner had access. She’s likely a spy for the Saudis and/or the Muslim Brotherhood. She uploaded government passwords to Yahoo, where they were promptly hacked.

Wikileaks revealed his email which contained codewords for pedophilia. A ‘sprit cooking’ advocate and possibly the son of Dr. Josef Mengele, Podesta and his brother Tony are friends with the Satanist, Marina Abramovic. John Podesta recommended drastic action to stop the DNC leaks. Seth Rich was murdered shortly thereafter.

The former Obama Attorney General met with Bill Clinton on an airport tarmac to discuss getting Hillary off the hook for her crimes. Lynch recommended to Comey that the Hillary investigation be called a ‘matter’ instead. Comey subsequently let Hillary off, saying she had ‘no intent.’ Lynch must have known that making law enforcement decisions to favor one candidate over another is criminal misconduct.

The very tall FBI director made secret deals with Hillary and allowed her to destroy evidence. His investigation into Hillary was a sham. He leaked classified information in order to undermine President Trump. He’s another example of the politicization and corruption of law enforcement officials.

The leftist billionaire donated hefty sums to Hillary’s campaign and to the Clinton Foundation. He also donated big money to anti-Trump protest organizations. Some organizations he funds also incite riots and murder. In other words, he funds anti-American groups and terrorists.

Recommendation: Arrest and confiscation of his fortune.

The hot-headed (and cancer-headed) senator from Arizona is already a war criminal, so it’s no surprise to hear about his ties to ISIS terrorists. He doesn’t stop at mere sedition, however. A year ago, McCain handed off the bundle of lies known as the ‘Trump Russian Dossier’ over to James Comey, so that the former FBI chief might start an investigation that would lead to President Trump’s impeachment. McCain engaged in treason.

The former president and Sexual Assaulter in Chief received $500,000 from Russia for a speech. It was really compensation from the Uranium One deal. Bill also received gifts including one million dollars from Qatar. The Clintons are grifters and whores who have always been all-too willing to sell out their country for a buck. Their money laundering outfit known as the Clinton Foundation raked in billions of dollars from influence peddling, while masquerading as a charity organization. Haitian earthquake victims only saw a drop of the money earmarked for them via the Clinton Foundation. Bill made 26 trips aboard his billionaire friend Jeffery Epstein’s ‘Lolita Express’ to ‘Orgy Island.’ Clinton has a long past of sexual harassment and abuse of women, starting when he was governor of Arkansas.

New evidence has come out that she may have ordered the murder of DNC staffer Seth Rich, who leaked DNC corruption news to Wikileaks. Responsible for hiring and vastly overpaying her IT aide, Imran Awan, who transferred massive data from a House server to Pakistan. Threatened police not to look at evidence on a missing laptop that they had secured. Schultz made sure primaries were rigged in favor of Hillary.

Let’s hope President Trump has ordered the preparation of a great many jail cells at Guantanamo. They’ll be needed!

Order Your Signed copy of LOCK THEM UP Today!

This cartoon on cover of the new book!