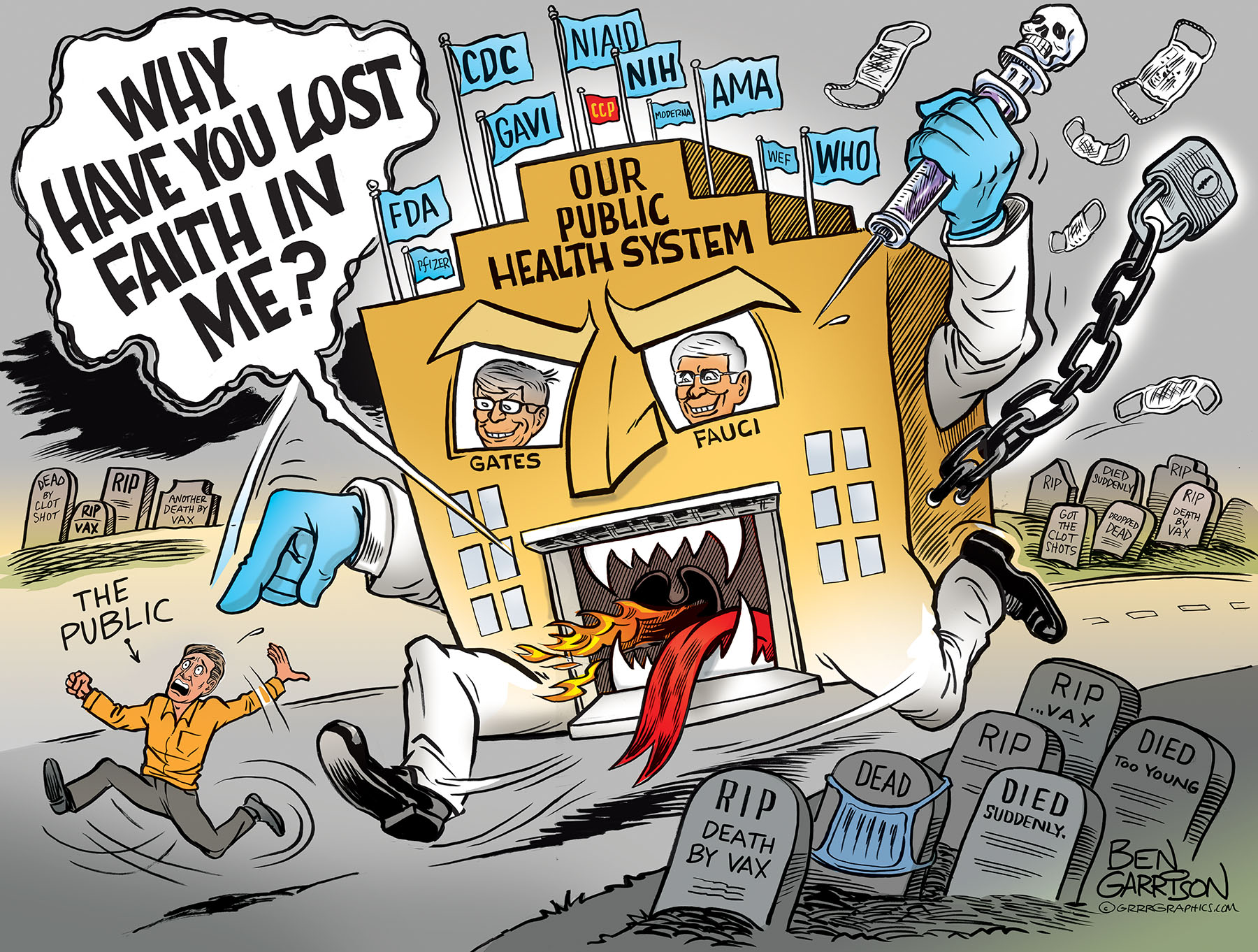 ‘Do Not Run-We are your friends’

We were told over and over that the Covid vaccines were ‘safe and effective.’

Biden told us if we got the shots, we wouldn’t get Covid, nor would we spread it. Biden parrots what he sees on teleprompter and those words came from so-called scientific ‘authorities.’ Their assurances were lies. 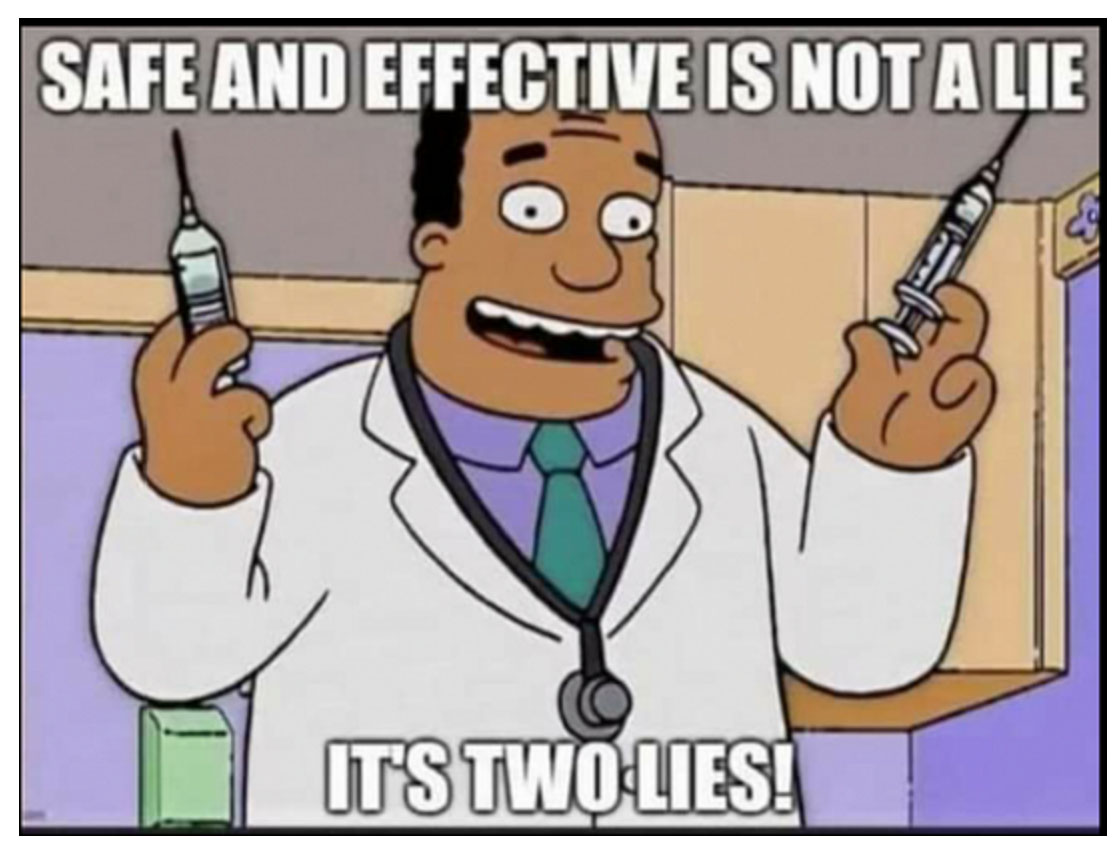 And don’t worry if those gene therapy ‘Fauci Ouchies’ were grossly under-tested. It was an emergency after all, so 10 years of testing in preparation for human treatment could be compressed down to a few months. Nothing could go wrong. After all, science respects emergencies. Especially when huge money is to be made, right?

One of those authorities who had the gall to pronounce that he himself was science personified is Anthony Fauci. I won’t call him a doctor. He is more butcher than doctor. He had already killed a great many with his AZT, a drug that was supposed to treat AIDS. It killed the patients instead. Here is a sadistic garden gnome who funded the torture of beagles, which furthered science not one iota. Anyone who can torture an animal will have no qualms about meting out similar treatment to humans. Fauci told lies about Covid from the start—beginning with his advice on wearing masks. Fauci has had way too much power. He decided where millions of dollars in funding would go. Those who agreed with his policies got funding. Those scientists and doctors who were not aligned with Fauci’s goals had their grant money cut and their reputations ruined. It was medical tyranny and Fauci was the head tyrant. Here is a man who blatantly lied to Congress. Nothing happened—Fauci is part of the deep state globalist swamp and he’s above the law. 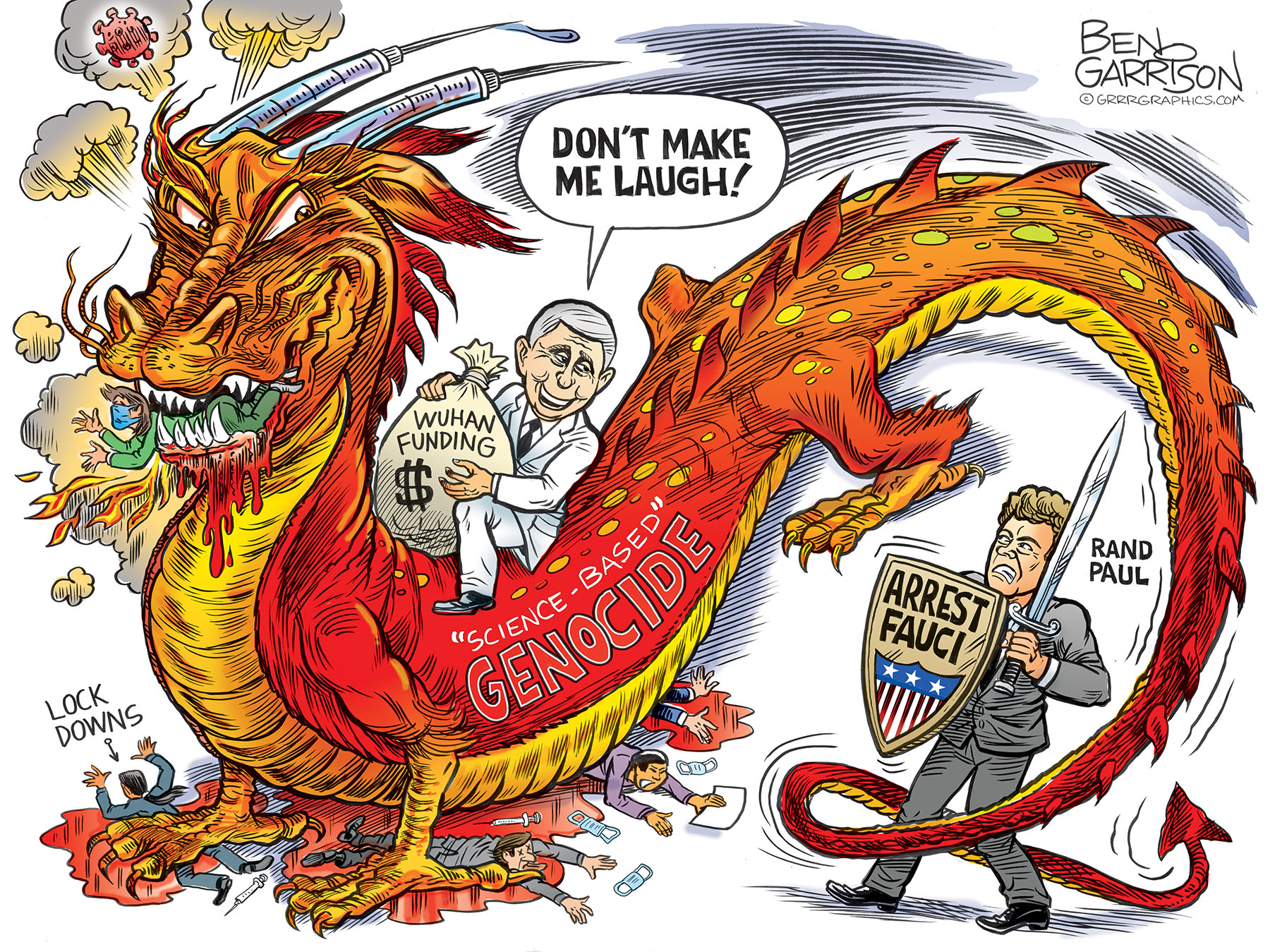 Another medical tyrant is Bill Gates. His foundation has funded a myriad of companies pushing vaccines. He has funded institutions such as the World Health Organization and the Global Alliance for Vaccines and Immunization, or “GAVI.” Bill is for anyone who pushes mass jabs, injections, punctures, pokes, vaccines, and inoculations into humanity. He talks as if he’s an expert on the subject despite the fact he’s a college dropout. He possesses no medical degree or expertise. He’s certainly not a virologist. What he does have are billions of dollars to get his way. What he wants, along with the WEF and many of the ruling elite, is a mass culling of humanity. 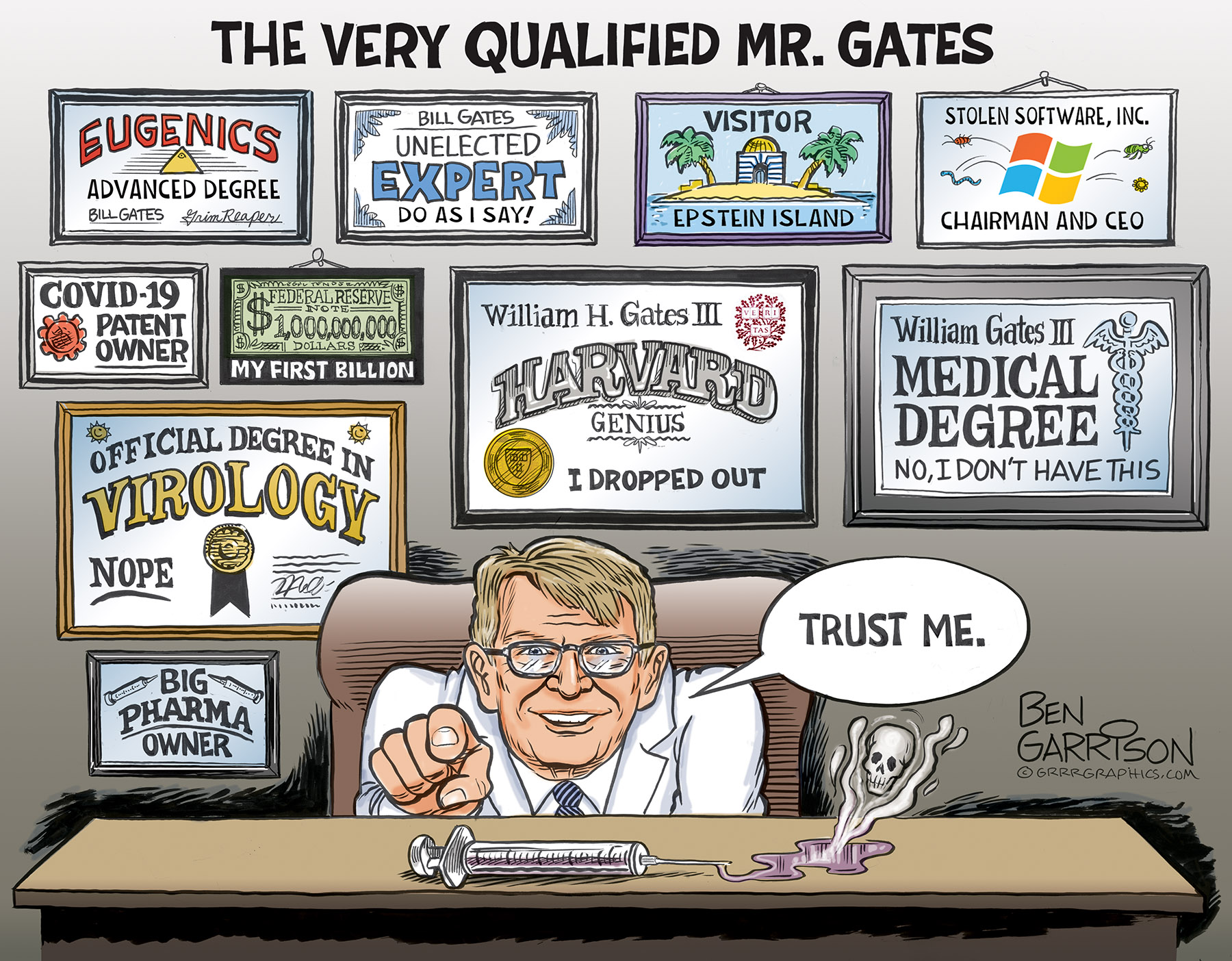 Millions have died and suffered severe side effects from the foul arm stabs pushed by the medical establishment. The problem is, those ‘authorities’ don’t have to worry about getting sued. Big Pharma doesn’t either—they have immunity. Expect them to get rebuked by the FDA or CDC? Ha. Those institutions have been compromised. Big Pharma executives who work there—it’s a revolving door. It’s sort of like how Twitter was compromised by the FBI.

Fight for America by supporting our weaponized Cartoons that make the radical Dems cry- make a small donation to support!

Don’t expect the legacy corporate media to tell the truth about the vaccines. They’re still pushing them because they depend on Big Pharma advertising. What a disgrace to journalism.

The public is being forced to wake up on their own. People are observing friends and family members who are dropping dead all around them. They’re figuring it out. Soon, more of us will realize our entire public health system is compromised. As it turned out, the medical industry is just as susceptible to corruption as any other entity. When money is combined with power, there is always corruption. When massive money and profit is combined with power that is unaccountable and without real concern for public health, then massacres occur.

The current carnage hasn’t been enough for Bill Gates, though. He’s already planning another deadly virus and then even more deadly vaccines. We can stop him by not participating in the demise he has planned for us. Don’t get the dangerous mRNA gene therapy jabs. Don’t wear the masks again. Don’t go along with the lockdowns. Stop obeying unlawful mandates and the medical ‘authorities’ who are bent on stripping our individual liberties away from us all.

We must never accept mandatory vaccination!

“We tried to Warn You!” Signed print available click to order yours 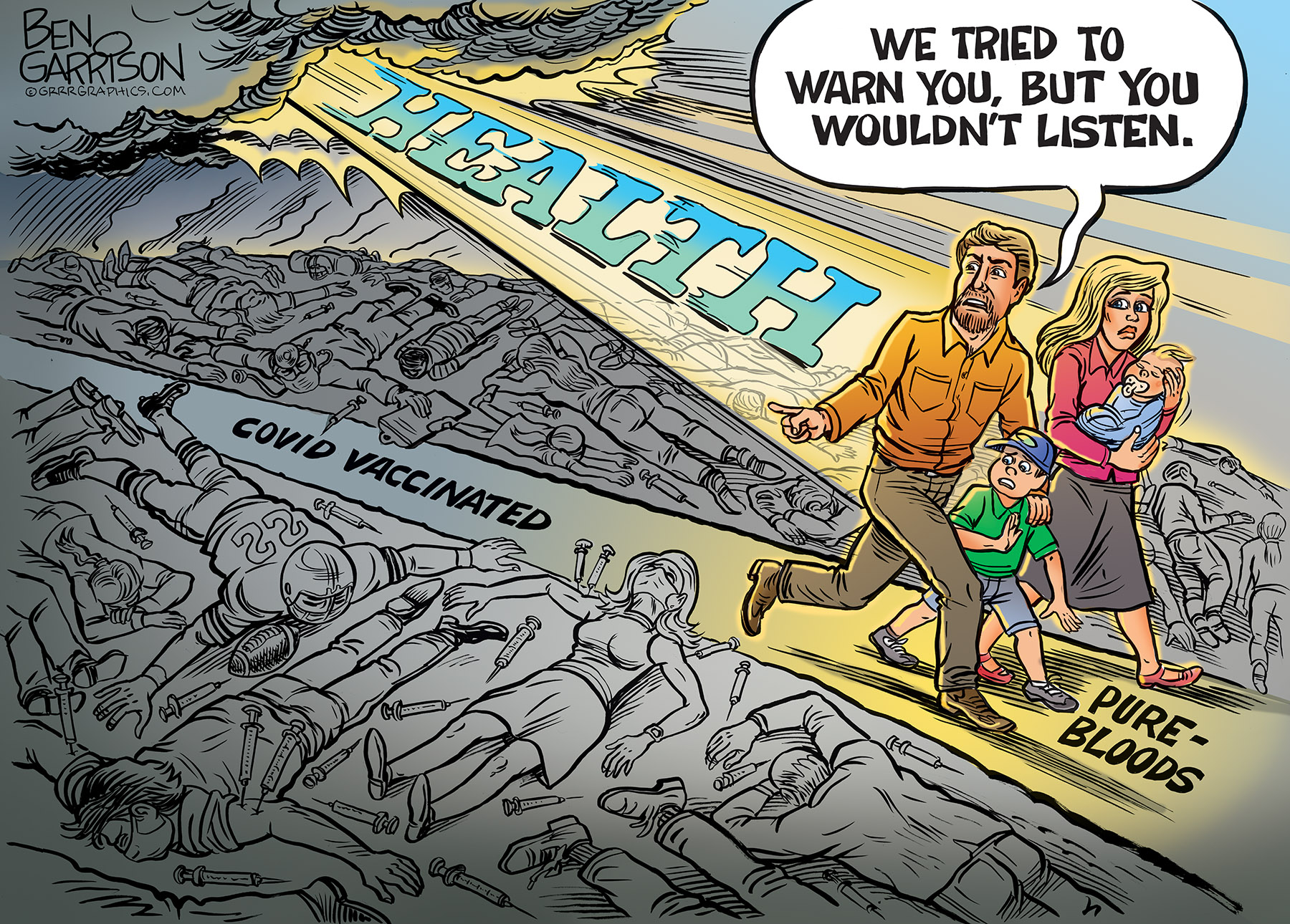 Will you help us fight for freedom and our nation? Please join us by supporting our work- make a small donation to start 2023 off right!