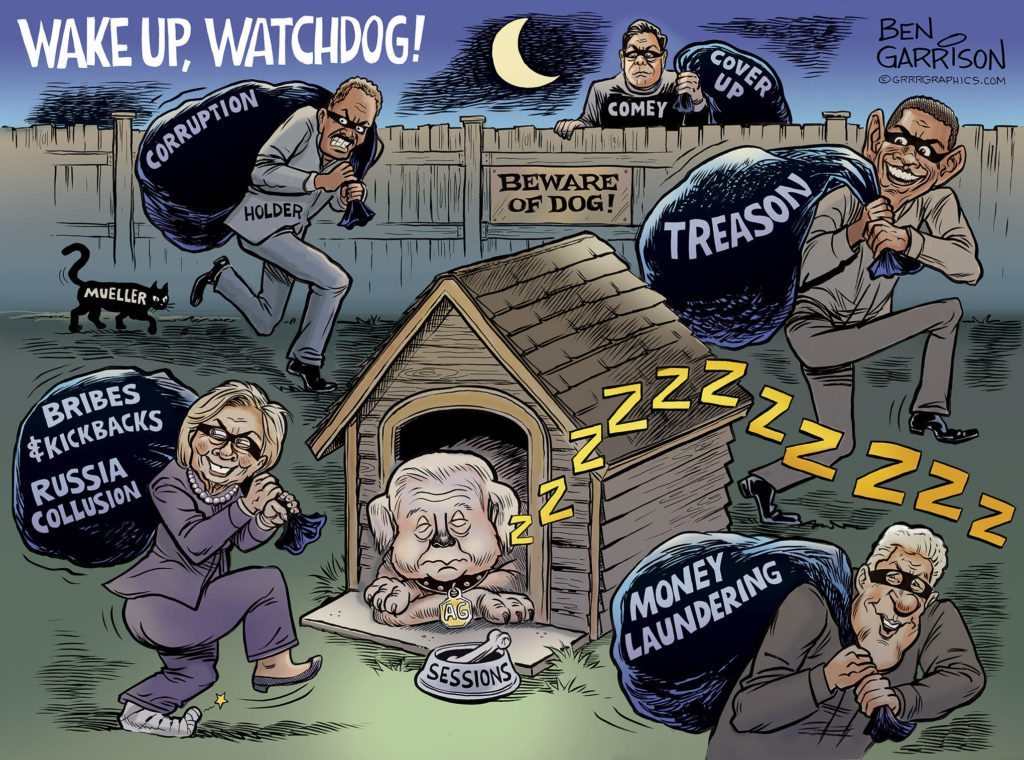 Somebody wake up Jeff Sessions.

When will our Attorney General spring into action and help take a bite out of crime? When will Hillary be locked up?

After all, she had an illegal private server that she used to store classified documents. As Secretary of State, she used her pay-for-play scheme via her and Bill’s money laundering instrument known as the Clinton Foundation. She claimed they were ‘broke’ after leaving the White House and now they’re worth over $50 million.

The Clinton Foundation raised nearly $2 billion and they still stiffed Haiti’s earthquake victims. What did the Clintons sell to gain that kind of money? Isn’t it worth an investigation?

Now we hear news that classified emails were found on convicted sex offender Anthony Weiner’s computer. The emails were quite likely leaked from Hillary to Huma Abedin. And what about Hillary’s deal with Russia? She allowed Russia to gain control of 20 percent of America’s uranium reserves in exchange for a hefty donation to the Clinton Foundation.

Barack Obama has refused to go away and is actively leading an insurrection against President Trump. George Soros funds both Obama and Hillary Clinton. Soros is spending billions of dollars on groups who want to destroy our history and our Constitution. Obama broke the law when he spied on the Trump campaign. Now Barack is starting the “Obama Foundation” so he too can get richer through money laundering just like the Clintons did.

Eric Holder was the former Attorney General under Obama, he broke the law and betrayed his country. Holder stonewalled the IRS investigation, conducted the gun-running operation ‘Fast and Furious,’ while at the same time he failed to prosecute the big banks for their crimes that brought the economy to the brink in 2008. In the 1990s Holder made sure the billionaire criminal Marc Rich was pardoned when he acted as assistant AG under Bill Clinton. Like Obama, he’s determined to bring down President Trump. He is encouraging Mueller to continue his witch hunt. Holder may be the most corrupt AG ever, with the possible exception of Loretta Lynch.

Comey broke the law when he engaged in memo leaking as the FBI chief. He let Hillary off the hook when he claimed there was no ‘intent.’ That wasn’t up to him to decide.

At the top, they get away with it. The fact that Hillary Clinton is not being prosecuted is disgraceful.

Jeff Sessions do your job.