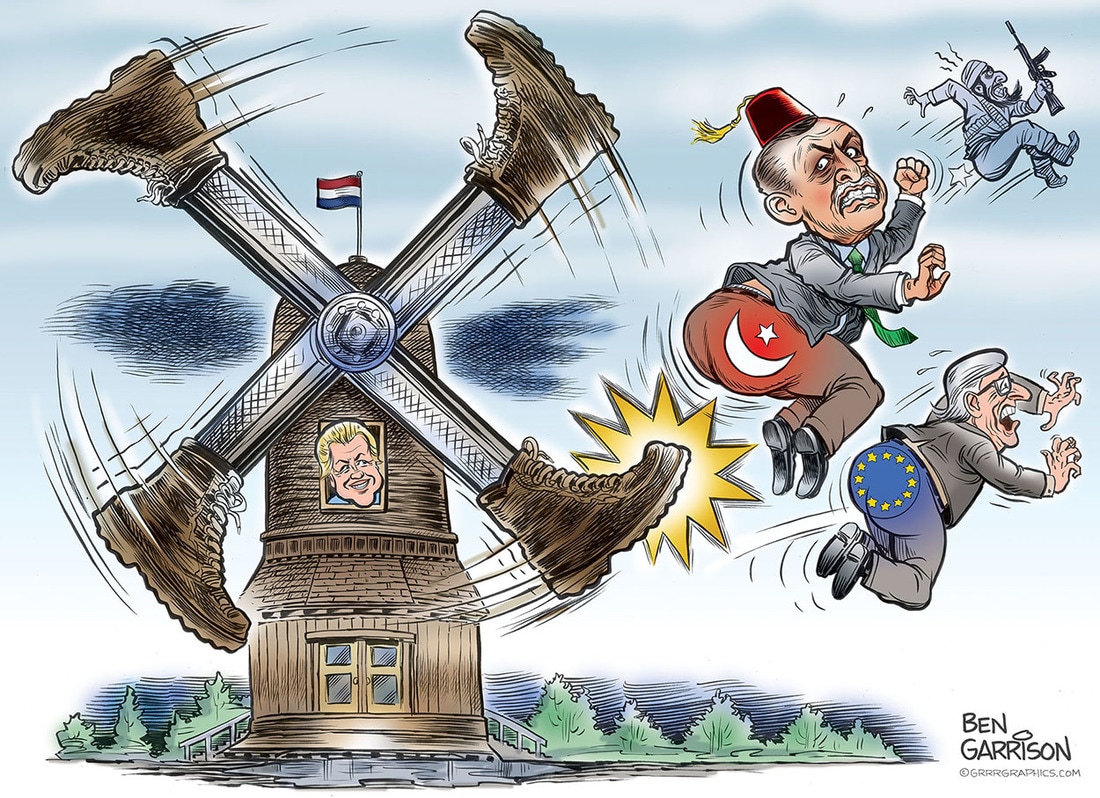 A Tribute to Geert Wilders

I drew this cartoon earlier this week in the anticipation that Geert Wilders might win the Dutch election. Wilders stood for halting the rising tide of Islam in the Netherlands as well as Europe. He was also for stemming the EU’s globalist hegemony and returning power to the people. Naturally, the EU loves endless Muslim immigration because it weakens nationalism and allows globalism to tighten its grip.

We also heard the cries of “Nazi” from such leaders as Erdogan, who himself is much more akin to Hitler than anyone protesting Islam. After all, the Turkish tyrant wants Islam to conquer Europe and he hopes to control that new ‘caliphate.’ He told his fellow Turks at home and in Europe that “You are the future of Europe.” He continues to threaten a dump of millions more Muslim ‘immigrants’ into Europe while calling for a holy war, or jihad. This will mean even more crime and terrorism committed by Muslim immigrants throughout Europe.

Wilders and LePen are at least trying to create some momentum to stop that invasion. They’re not only trying to protect their own countries, but they’re also raising awareness that western civilization itself is at stake. Do we really want to see Europe fall to Sharia Law? There will be honor killings and child marriages (like the one their leader Mohammed himself had—he married a nine year-old).

Do we really want to see gays prosecuted? Stoning and beheadings? There will be rise in female sexual mutilations as well as the general oppression of women. Christians and Jews will be attacked. This is how Islam spreads—by force. I too once bought the malarky that Islam is a religion of peace. No, it has always spread by violence.

My friend Enrique from Spain told me that we shouldn’t give up just yet. Wilders gained seats. Le Pen may not win either, but awareness is being raised. So I decided to publish this cartoon anyway.

It’s time to get over the Political Correctness hurdle and start trying to save western civilization while there’s still time.