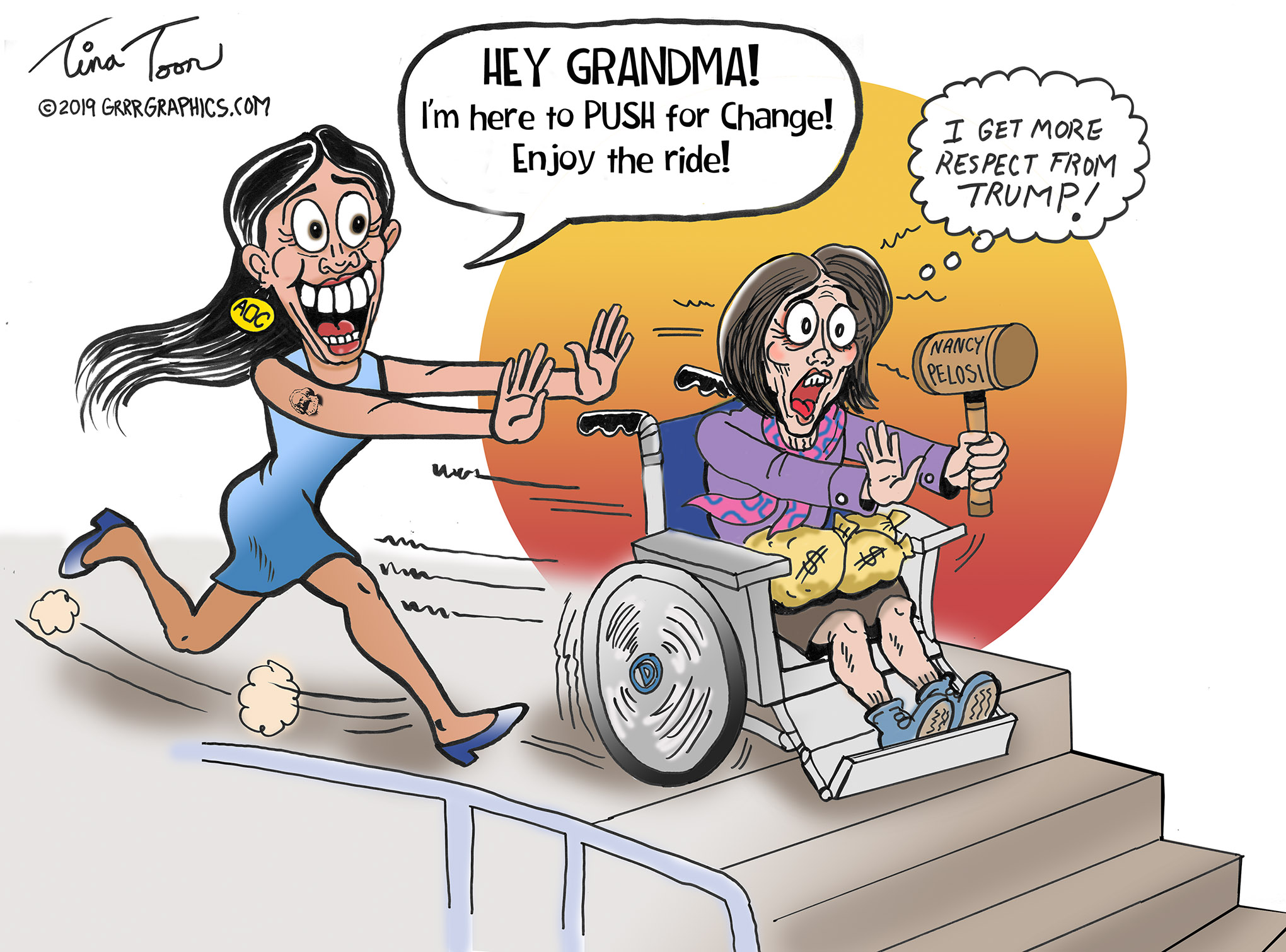 UPDATE Feb, 7th 2019:  AOC unveils the Socialist wet dream, The Green New Deal. It’s like a Republican parody of  Democrat policies! Nancy Pelosi loses control as AOC rolls right over her. All Pelosi can do is hang on to the wheel chair! Example of what’s inside the Green Deal… replace/refurbish every building in USA to Green standards in 10 years! Good luck with that chump!   Breitbart story

Alexandria Ocasio-Cortez, or as she likes to call herself “AOC”, has been featured on many mainstream news outlets eager to give the self-proclaimed “Democrat Socialist” a platform.

She has expressed support for 70% take rates, an Obama-inspired  “Green New Deal”, and even managed to insult Joe Lieberman with a tweet asking “New party. Who dis?”

For an ex-bartender, she struts around acting like she is the future, the new face of the Democrat party when actually she knows well, nothing.

Nanna Nancy Pelosi has her hands full with the new batch of incoming House Representatives.  Trying to keep them in line is like herding cats, you get one back in line and six others take off in all directions.

It hasn’t even been 30 days of the new Democrat House, and we have watched them make blunder after blunder like kids in the house unsupervised while Mom and Dad are out.

(Sorry dearie, don’t you know you need 2/3s of the Senate to impeach a president? The GOP hold a strong majority.  Oh, but it makes good sound bites and gets your name out there.)

A bunch of House Democrats went on a vacation to Puerto Rico, enjoying the beach during the Government shutdown. Bad optics? Wut dat?

And AOC  recently floated a 70% tax hike on the wealthy in her 60 minutes interview. Let’s see, if you’re wealthy in New York, would you pay the 70%  Federal tax rate, the New York state income tax of 10%, and if you live in New York City, the additional 6%? That would be a tax rate of 86% for some. Yeah, that sounds fair.

Her Green New Deal includes generating ALL the nation’s power from renewable sources and totally eliminating green house gas emissions.  She stated this would entitle ALL people to pay their “fair share” of new taxes.

This is what socialists do folks, they take your money and spend it (pocket it) as THEY see fit. You are too stupid and smelly with your ten teeth to even comprehend what a Big Brain like AOC’s is thinking.

And she knows what is best for you… you don’t!

Ocasio-Cortez also stated in the 60 minutes interview, “Call me a Radical.”

Join Ben and Tina at SubscribeStar- a free speech alternative to Patreon! Click to join