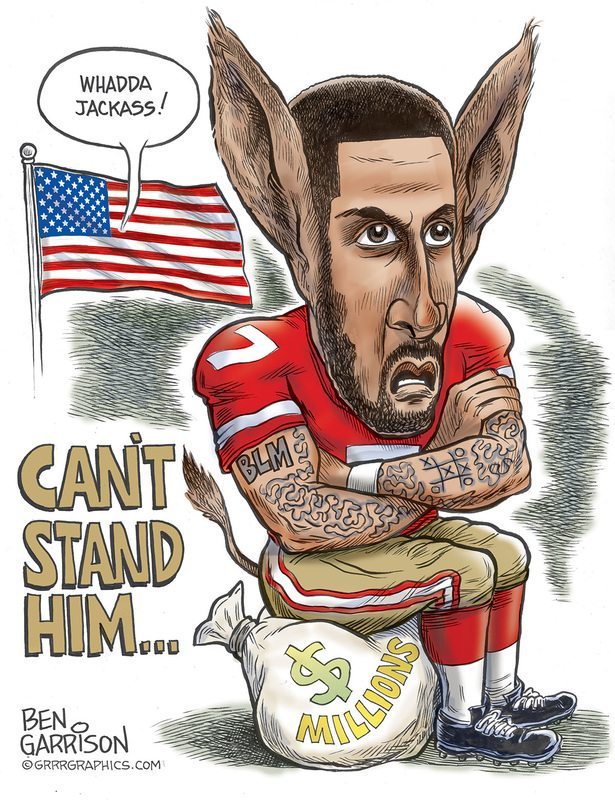 It’s a free country and nobody should force Colin Kaepernick to stand up during the National Anthem. It’s his right and free speech to remain seated. I have a friend who refuses to say the ‘pledge of allegiance.’ His only allegiance is to God and Jesus Christ. I respect his view and it’s also his right.
However, the flag represents ALL the people–not just the corrupt politicians and the ‘racists’ that he claims he’s against. ALL the people do not deserve to be disrespected. While such a protest is his freedom of speech, we also have freedom of speech and we’re free to condemn his behavior.

When Barack Obama was elected, it was supposed to mark the end of racial division in the country. Instead Obama worsened it. Black Lives Matter has worsened it further. Hillary will make it still worse. She doesn’t even favor English as the official language. The common culture of America will continue to be fragmented under her administration. That’s exactly what the globalists want—a weak and divided America that will make it easier for them to control us.
​Kaepernick claims Trump is an ‘overt racist,’ but he has no proof of that. He’s merely parroting what he has heard from the mainstream media. Trump does not want ISIS freely brought into the country. Islam is not a race. He doesn’t want a wide open border with Mexico. Mexicans aren’t a race.

If Colin really wanted to make a statement against corruption in government (and there’s plenty of that), he could stop paying his income taxes. That would require a true sacrifice on his part. Sitting on his ass while collecting millions of dollars in pay is not much of a sacrifice. It only draws attention to him and his faltering performance as quarterback. Once the 49ers ax him, I expect he’ll vanish from public view. He’ll live a comfortable if not lavish lifestyle and drop off the public radar. It can’t happen soon enough.—Ben Garrison