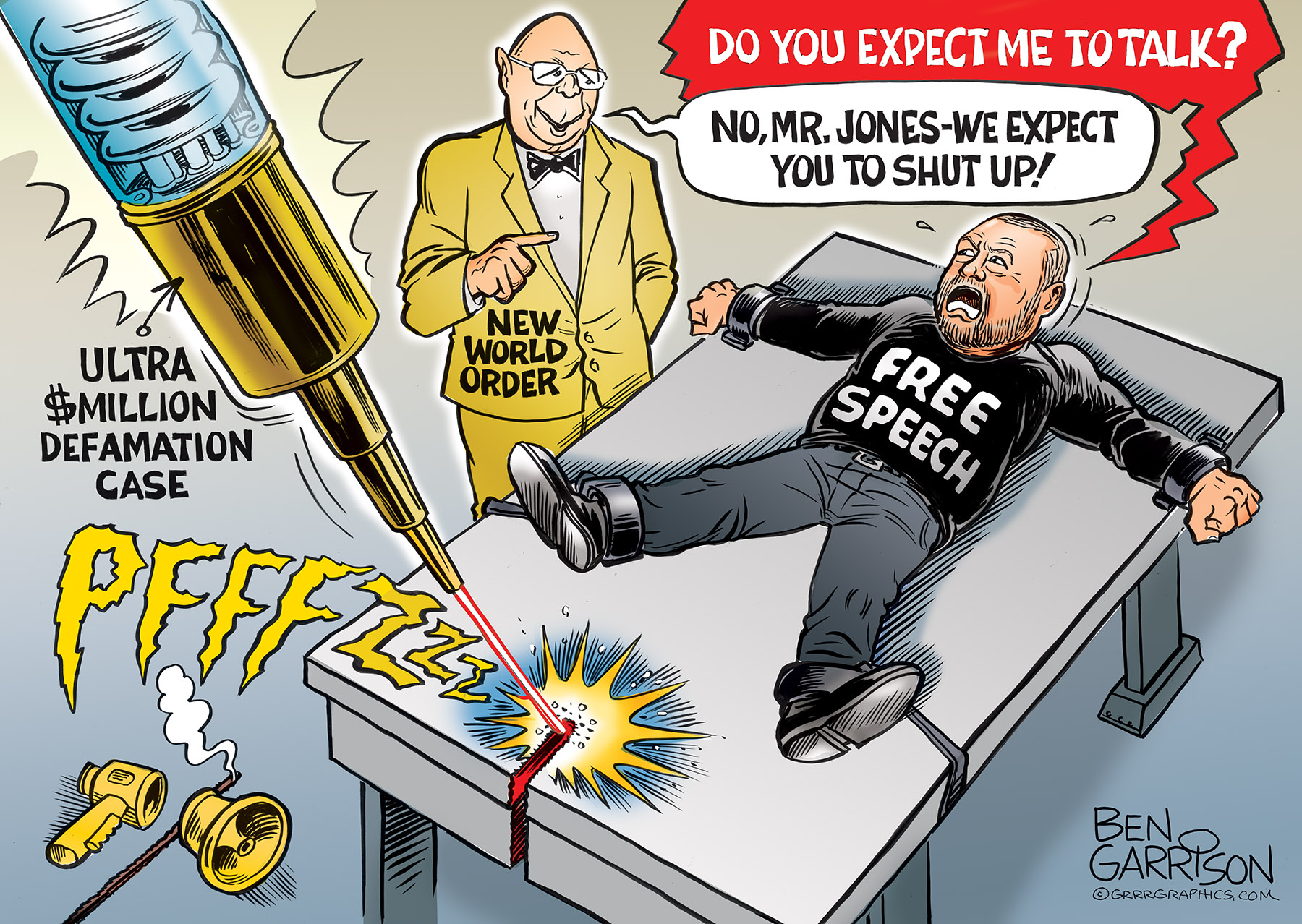 Revolver news published an excellent article about Alex Jones and the Sandy Hook lawsuit he has been facing. Free speech continues to be imperiled:“…It is a very dangerous precedent to set when the feelings of grieving families can be used to silence reporting — even “conspiratorial and crazy” reporting — on tragedies of national significance. The Sandy Hook tragedy was a very public and very politicized event from the beginning, and almost immediately became enveloped into a national debate about gun control.” Revolver NewsAlex Jones needs to receive more support from conservatives who value freedom.

I followed the Sandy Hook news and there were plenty of strange things about it that might lead one to think it was a hoax. In fact, I hoped Jones would maintain it was a hoax in order to lead to a discovery phase of the trial. The plaintiff would have a lot of explaining to do.

Sign up for the Grrrgraphics newsletter and never miss a cartoon- Click to sign up todayMostly this is about going after Jones, who supported Trump in 2016. He was among the top influencers who attracted a lot of attention and support for our 45th president. The New World Order is now remedying that situation. Social media giants have since banned and silenced many conservatives, including Jones and GrrrGraphics. At the top, the mega billionaires (and probably trillionaires) are spending copious amount of money to influence us. We know the anti-American George Soros has already ‘bought out’ many district attorneys in big cities. His goal is making sure Americans deal with skyrocketing crime.

Now rumor has it that Klaus Schwab will hire thousands of people who will use social media to parrot his official narratives. Any differing opinion will be impugned as ‘misinformation.’

What has happened to Alex Jones is a direct assault on our free speech. Sandy Hook was a big news story and as such we have a right to question the facts that were shoveled to us by the ‘authorities.’ If this hurts someone’s feelings, then too bad. Even if the Sandy Hook plaintiffs do have a case, forcing Jones to pay mega millions of dollars in damages is ridiculous. In other words, it’s not about justice. It’s about silencing Jones.