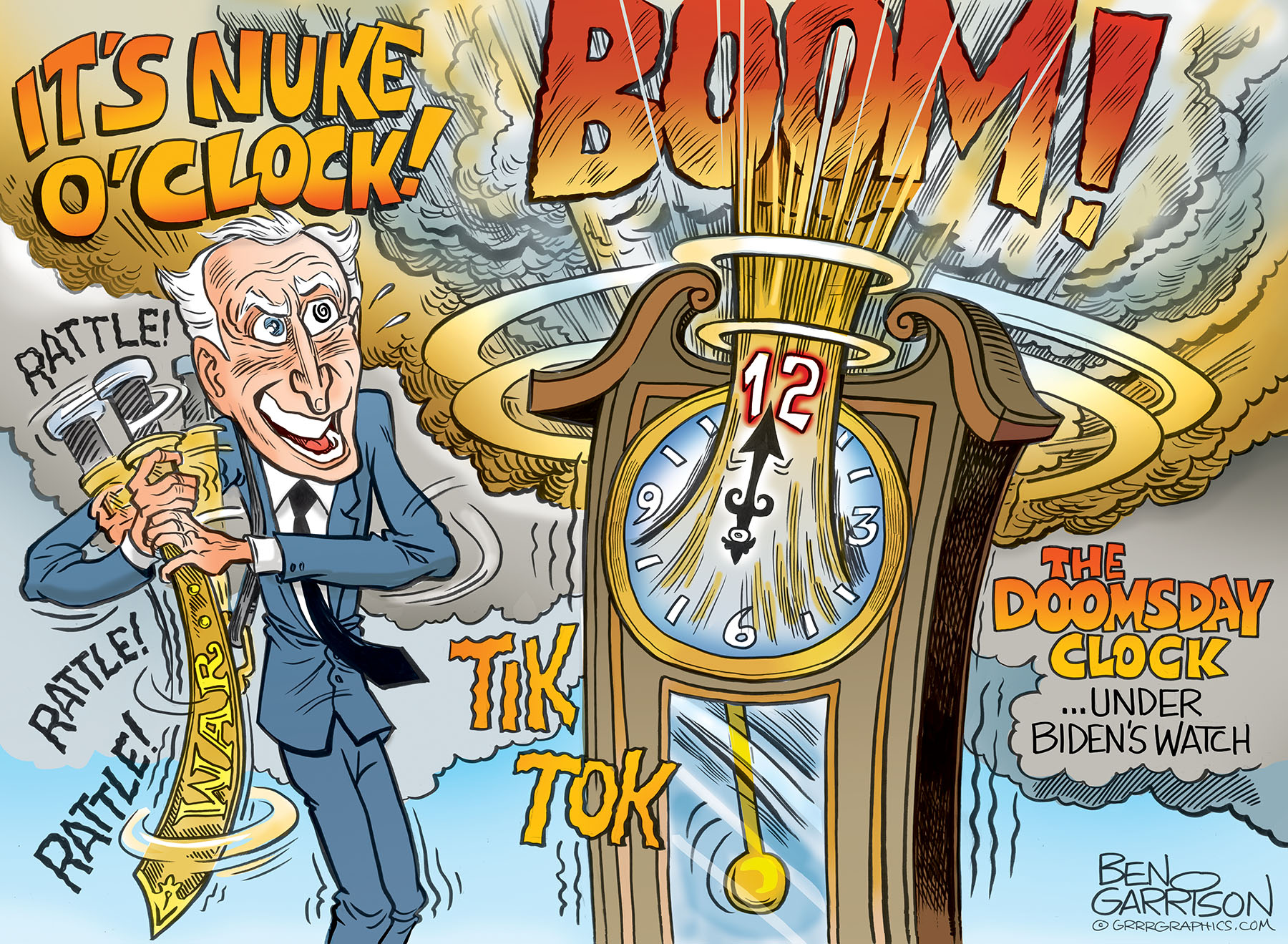 It’s difficult for me to fathom how our so-called political leaders can pound the table for more war with a blithe disregard of the possibility of an Earth-ending nuclear war. Instead, they’d rather drag us all to the brink of such a war over a country most Americans could not find on a map.

I drew an anti-war cartoon and as a result I received hate mail accusing me of being a ‘Nazi.’ This struck me as odd. After all, aren’t there a lot of Nazis fighting for Ukraine? Does the far left wing controlling the Democrat Party know this? Does Alexandria Ocasio Cortez know she’s voted to fund such Nazis?

If it weren’t for US involvement, Zelensky the tyrant would have long been talking peace terms with Putin. After the US conducted a coup in 2014, they removed the pro-Russia president and replaced him with Zelensky, who began bombing the Donbas region in eastern Ukraine. The citizens there are 90 percent Russian. Zelensky also wants Ukraine to become part of NATO. This is something that Putin naturally cannot tolerate. Ukraine is on Russia’s doorstep and NATO’s aggressive encroachment was designed to intimidate Putin. Not to mention all the bioweapons labs operating in Ukraine. Putin felt he had no choice to invade and the US is making sure Zelensky has endless billions of taxpayer dollars to keep the bloody war going indefinitely.

The t-shirt wearing Zelensky is now barking out orders for more and more billions of our dollars and you can bet a lot of that fortune is going into corrupt, private hands. Without this money, the war would have already been long over.

Instead Biden and the warmongering Democrat Party, along with the Neocon Republican warmongers, keep talking about fighting until Putin’s demise. They refuse to open any avenue that leads to peace and indeed Zelensky has signed a document that prevents any peace talks. This is insanity. Even more insane is the risk of outright nuclear war and that will be the end of planet Earth. Again, Biden and his madmen seem oblivious to this.

Perhaps the warmongers should watch an old movie titled “On The Beach,” starring Gregory Peck. It shows what the world is like after a nuclear war with Russia and the results are horrifically portrayed. At the end, nobody is left alive. There is still time. Vote the warmongers out in November and end this insanity. The US has no vested interest in what happens in Ukraine other than the fact it has been a corrupt, globalist money laundering center. Is money more important than the threat of nuclear annihilation?

“There is still time … Brother.”

Cartoon available as a signed print- order yours today!