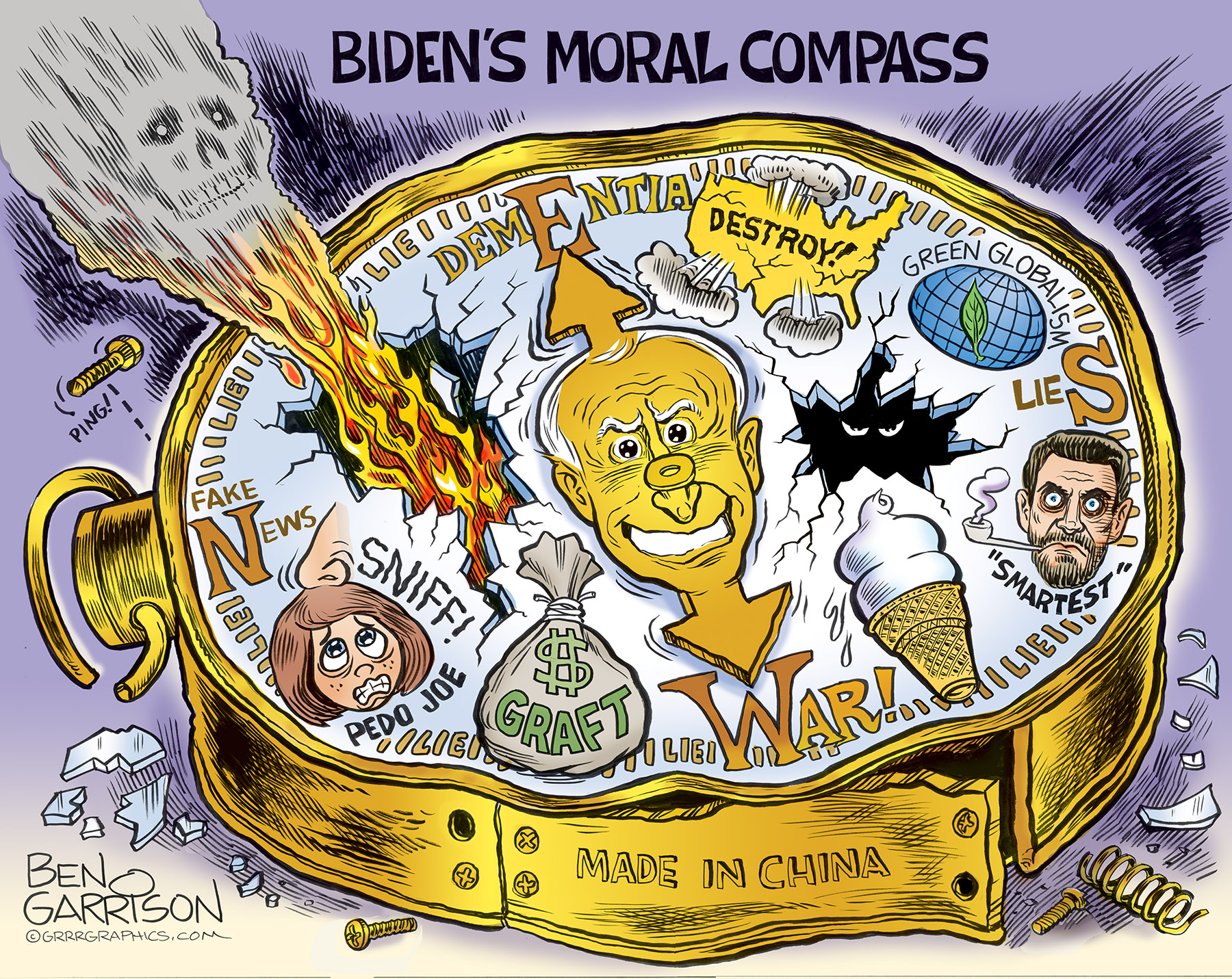 Biden’s moral compass is broken, shot, cracked, and spinning out of control

What moral compass, you may ask?  The man never had one. If he DID have one, it would look like our cartoon.

Did you know Joe Biden marks fifty years in American politics this year? Fifty years and what has Biden done to help or improve the lives of American citizens? Nothing. He did make sure he improved the lives (and bank accounts) of his big banker backers as well as his own family—especially his son Hunter—whom he called, “The smartest man I know.”

Graft flows freely in the Biden family and it enriches them all. Biden has used his political positions to sell out the country to highest bidders around the globe. Corruption is Biden’s middle name.

Everyone knows that China Joe is an illegitimate President. There is no way he could have gotten 81 million votes. He finished in 4th place in the Iowa primary. 5th place in New Hampshire. After those disastrous drubbings the Democrat Party string pullers decided to rig things in his favor. The presidential election was rigged for him, too. They wanted Joe to win, because they knew he would make a good puppet for them.

With all the evidence proving the election was stolen and rigged, only the totally brainwashed and fake news media would believe he received more votes and was more popular than Obama. No sane person thinks the election was “legal and secure.”

It’s all-too obvious that the ongoing destruction of our country is not just a result of Biden’s profound stupidity—it has all been done by design. It’s intentional. What we’re witnessing is the systematic controlled implosion of the American experiment.

The Democrats are full-blown communists who are running our country as if they were modern day Stalins. Look at how they weaponized the IRS, DOJ, CDC, and of course their political enforcers, the FBI. Every part of the Federal government has been taken over and corrupted. They’ve become weaponized tools of the state to punish American citizens and achieve their goal of total control. They desire the complete destruction of the American nation.

Time is running out. Every American must stand up now and fight to save the Republic. We must overwhelm the polls with a red tsunami so gigantic that any cheating will be drowned out. Get out and vote on November 8th. Become a ballot box or poll watcher. Spread the news on social media. Use your stickers, your flags, your flyers, and signs to get the word out.

We will prevail; not fail.

Invest in your future – and the future of freedom – and make the one and only Ben Garrison “Biden’s Moral Compass“ original artwork yours.