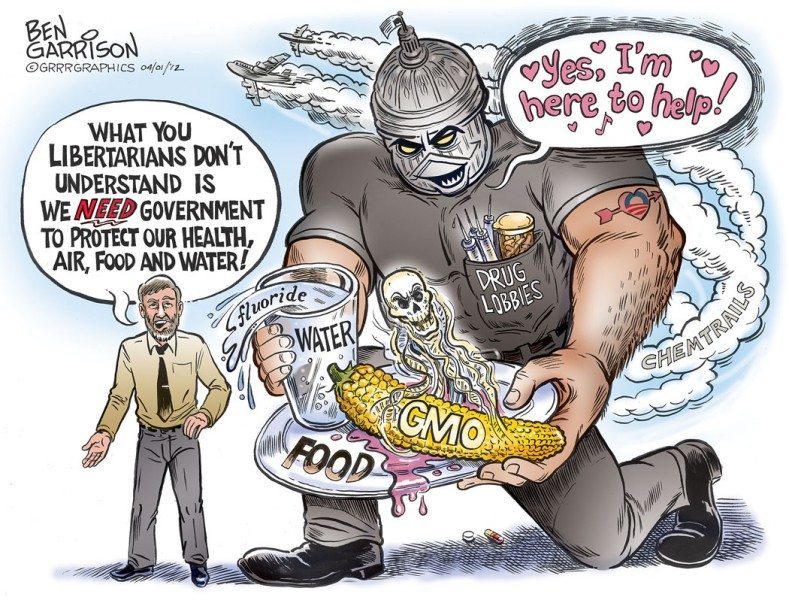 I decided to draw this cartoon to refute those who still think big government and their functionaries are out to ‘help’ us. Once upon a time we had a republic with checks and balances. The government was relatively small and the people were free. Now government is gargantuan and the people are becoming slaves. It is no longer recognizable as the government Jefferson had in mind. It has mutated into a counterfeit of sorts–a ‘pink slime’ government. Still edible maybe, but very bad for you. The global banks, corporations and the military industrial complex that Eisenhower warned us about have taken over. It is rigged in their favor.
As George Carlin once said in his “It’s a big club, and you ain’t in it!” speech, they don’t care about us. At all. AT ALL! That’s why they see to it that our water is ‘medicated’ with fluoride–a poison. That’s why GMO food poison is allowed to proliferate. That’s why they’re spraying chemicals in the atmosphere. That’s why they say ‘it’s the law’ when it isn’t in order to inoculate us with noxious substances. They want to keep us doped up on their drugs and keep us from natural foods and medicines. Government wants us sick. They want us dumbed down and not question what’s going on. They want more power and control over our lives, more of our money and for us to die quickly after our usefulness is gone so we don’t burden their system.
The statists will keep claiming we just need more government to solve problems largely created by government. They’re like the natives on the ‘Eden’ planet in an episode of “Star Trek.” In that episode, “VAAL” controlled everything. Once removed, the natives were confused: AKUTA: “But it was Vaal who put the fruit on the trees, caused the rain to fall. Vaal cared for us.” KIRK: “You’ll learn to care for yourselves.”
We should listen to Captain Kirk.