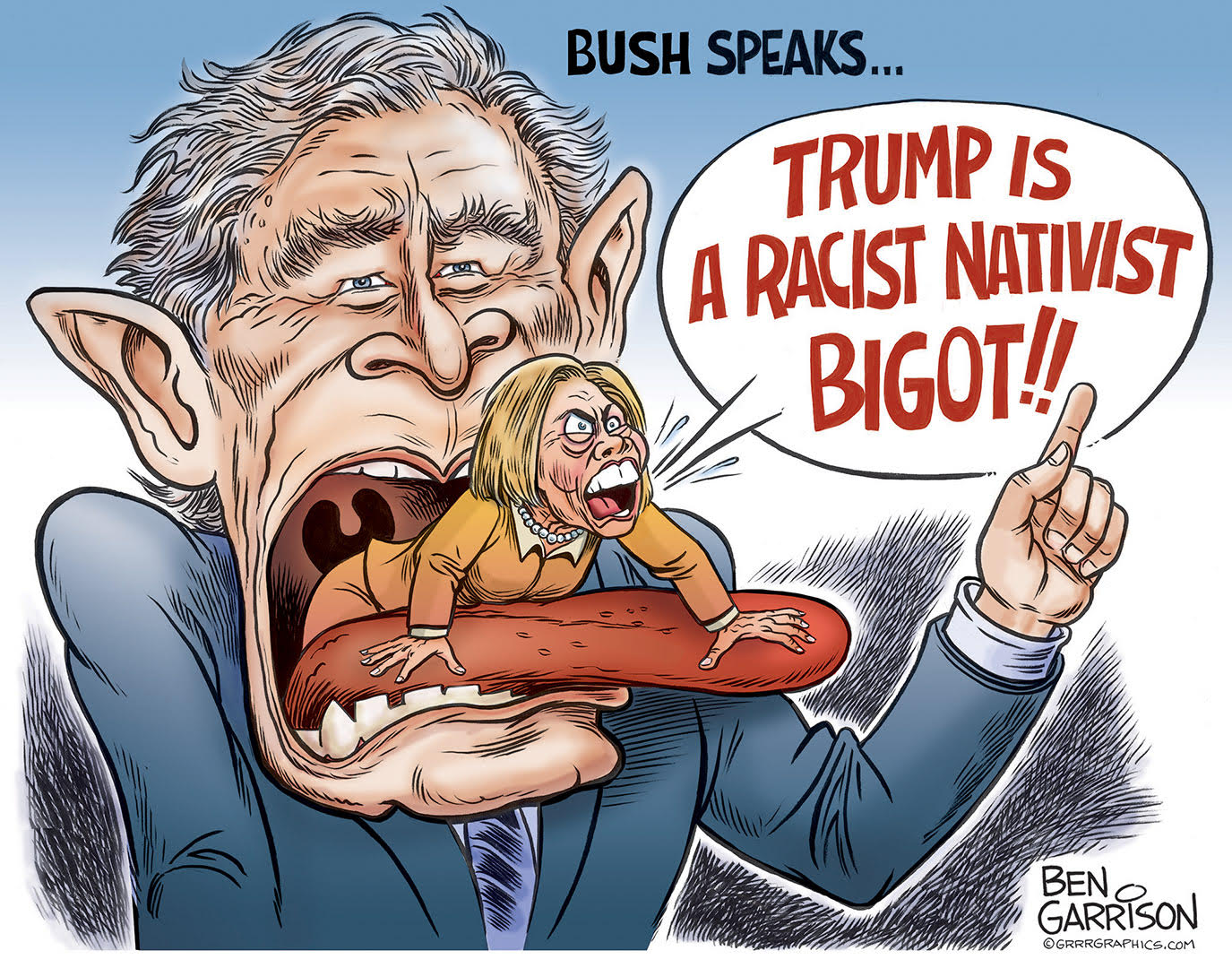 George W. Bush opened up his trap the other day and out came Hillary.

At least, he sounded a lot like the Hildebeast. W remained strangely quiet for the eight years Obama was in office, but now that Trump is in the White House, he’s full of criticism. Former presidents who spout criticism this early in a new administration is considered bad form.

Regardless, Bush joined Hillary, Obama, and John McCain in attacking Trump. They’ve all shrilly denounced the direction Trump would like to take our country in order to make it great again. Pappy Bush, now in his 90s, even expressed some support for Hillary. After all, he has his New World Order legacy to protect. His son refused to vote for his party’s candidate and left the ballot blank—just like his mind.

The Deep State continues to close ranks against our president, but by doing so they can no longer pretend to be on the side of America.

Like the NFL kneelers who disrespect our flag and our history, we’re seeing insulting displays of protest by many establishment politicians on open display. Some of it borders on treason. Democrats and Republicans alike seem to want open borders, carbon taxes to fight ‘climate change’ and jobs sent oversees. Like Soros, they want globalism.

Trump disagrees and therefore they smear him as a ‘nationalist,’ or ‘nativist.’ The latter sounds more insulting. However, there’s absolutely nothing wrong with nationalism and a ‘country first’ attitude. Nationalism used to be synonymous with patriotism.

Trump is a patriot. He wants jobs to go to Americans first and he wants the borders controlled. He doesn’t want us to pay carbon taxes to the farce known as climate change. For this wrong think the Deep State smears him as a ‘bigot’ and ‘racist.’ They perpetually bring up the nonsense that he supports ‘white supremacists.’ I’m surprised Bush didn’t mention Russia.

For those on the left complaining about the ‘coarsening’ of politics and civic values, let me remind you that Bill Clinton took advantage of a young intern in the Oval Office, a Harvey Weinstein-like advantage. Obama greatly worsened race relations while doing absolutely nothing for African Americans. Instead, he furthered the interests of George Soros and the big banks.

The more the Deep State screams, the more we’ll know that our president is on the right track.