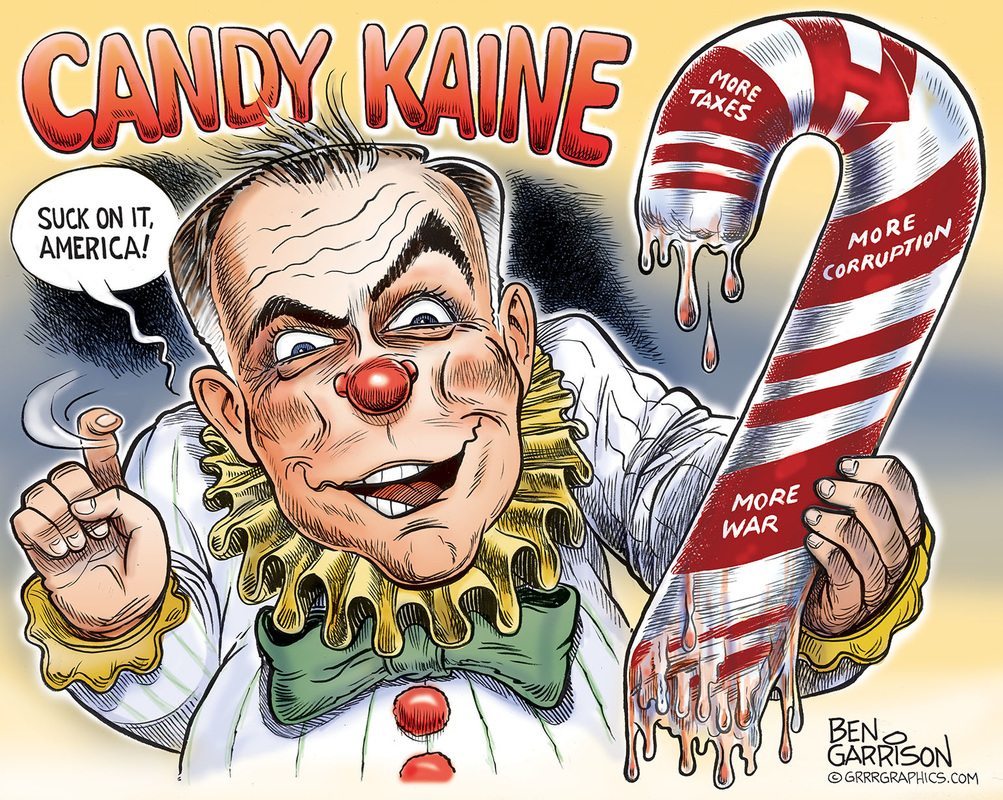 There have been many creepy clowns spotted throughout America recently. Tim Kaine may be one of them. He made a fool of himself during last night’s debate. He constantly interrupted Pence with strident insults. Kaine once peeled off a series of ridiculous anti-Trump slurs (“He hates Mexicans!”) and he ended it by accusing Trump of conducting an ‘insult-driven campaign.’ It would be laughable if the situation our country is in wasn’t so dire.In fairness, Kaine was placed in a difficult position—that of being an attack dog for Hillary Clinton. Being asked to support an unpopular, physically ill and lying criminal who is reviled by most Americans must be quite a challenge. Kaine tried to defend her even though she labeled a vast amount of Americans as ‘deplorable.’ How could he defend Hillary’s lust for dirty money? The Clintons have accrued fantastic amounts of cash from speeches and Clinton Foundation money laundering. How could he defend Hillary when she is a criminal traitor who used a private server and destroyed evidence of her wrongdoing? It was a fool’s errand for Kaine and he played the part.It has come down to a billionaire businessman and a statesman with a talent for debate versus a witch and a clown.Ben Garrison​
October is Grrrgraphics Anniversary on Patreon! Come Celebrate with us at Patreon!
*All CURRENT and NEW patrons will receive a FREE membership to the EXCLUSIVE GRRRGRAPHICS  MEMBER FORUM coming in OCTOBER

* Sneak PREVIEW of the redesigned  GrrrGraphics website   launching in October

* If you are a current patron or pledge before Nov. 1, Your name will be included on the Thank You Page of the upcoming “2016 ELECTION YEAR IN REVIEW” BEN GARRISON CARTOON BOOK*  publishing after election.*
*You may opt out or use an alias if you would like to remain anonymous