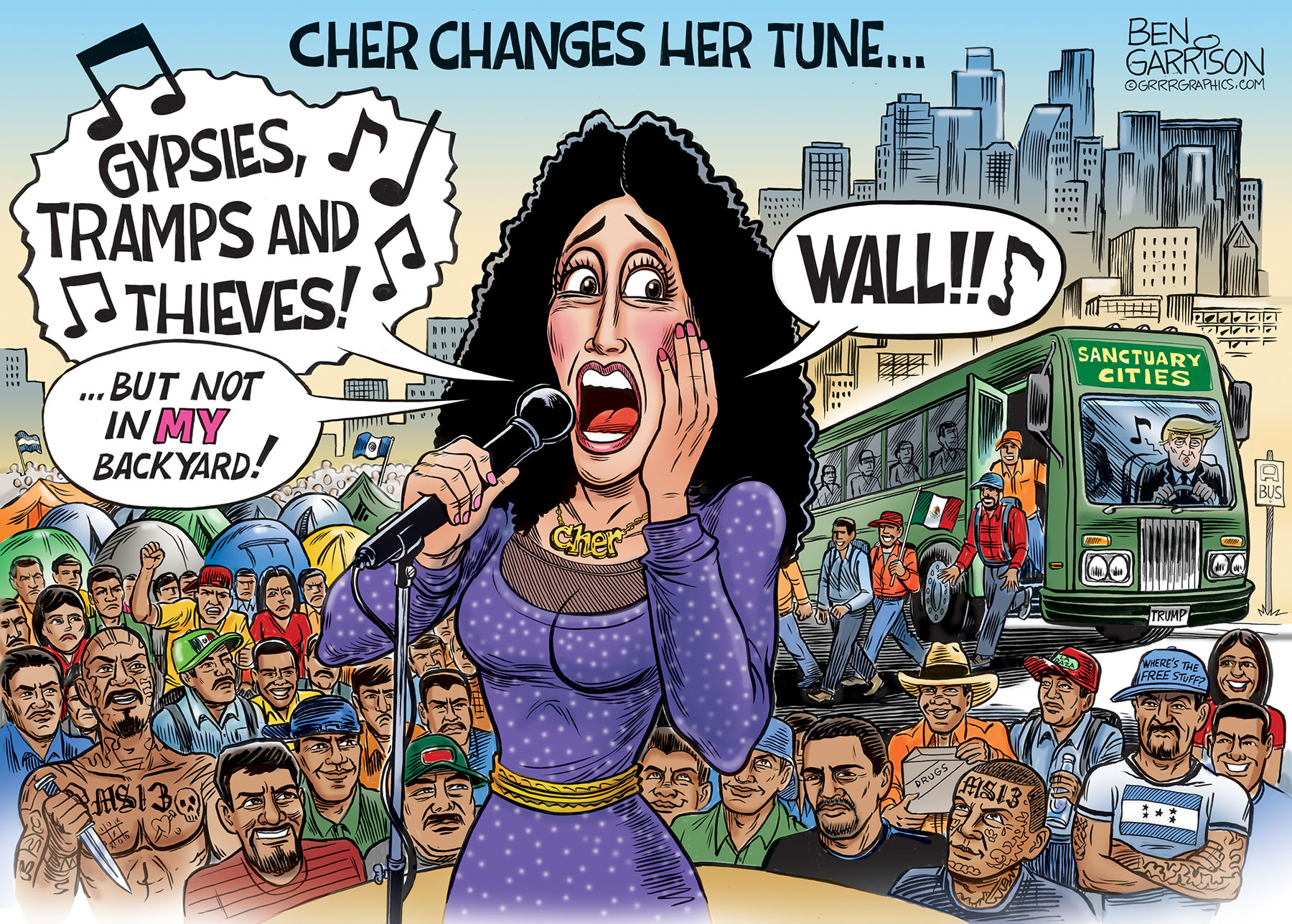 President Trump wants illegal immigrants to be shipped to sanctuary cities where they will be welcomed with generous and protective arms.

Cities such as San Francisco, Los Angeles and Seattle are already accommodating law breakers anyway, so why not take in more homeless illegals—thousands more—the more the merrier?

Cher reacted by tweeting that California should take care of the tens of thousands of homeless living in her state already. For once Cher spoke what she knows is true instead of repeating lines from the limousine liberal script of political correctness.

GrrrGraphics is Now on SubscribeStar, A free speech supporting alternative to Patreon, Stop The Censorship  Click to Join

San Francisco already has 28,000 homeless roaming and defecating on the streets. Many are mentally ill and/or drug addicted and they discard used drug needles everywhere.

Los Angeles and Seattle are also becoming ugly hell holes. All three cities used to be places that tourists wanted to visit. Not any more. It’s because they are all run by far-left loons who won’t allow their own police to hurt anyone’s feelings.

The socialist control freaks that are in charge are now welcoming ALL illegal aliens to come there. Will there be thousands arriving? Why not millions? The magic of socialism will take care of everyone coming in from anywhere in the world.

Everything’s free because the city leaders love to put their magnanimously egalitarian hearts on display while letting citizens pay for it all in terms of taxes and much higher crime rates.

A sure cure for Trump Derangement Syndrome will be forcing any leftist leader who calls for more illegal immigration to actually take care of those illegal immigrants themselves, personally.

Let them allow uneducated strangers who can barely speak English show up uninvited and pitch tents in their backyards.

Make Progressive Leaders feed and cloth them, provide medical care and pay for education. Also, make sure they personally endure any crime committed. This won’t happen, though. The leaders live in well-protected mansions with big walls or opulent and carefully guarded condos.

Cher’s concern backfired on her quickly.

Trump agreed with her—what an unendurable embarrassment! The left quickly accused her of repeating ‘white nationalist’ sentiments, so now she’s furiously virtue-signaling and reaffirming her TDS. Yet in her heart, she knows Trump’s wall is necessary.

Ready To Join Us? Support 2020 Weaponized Cartoons at our Patreon Page click to view– Also on SubscribeStar Click to View!