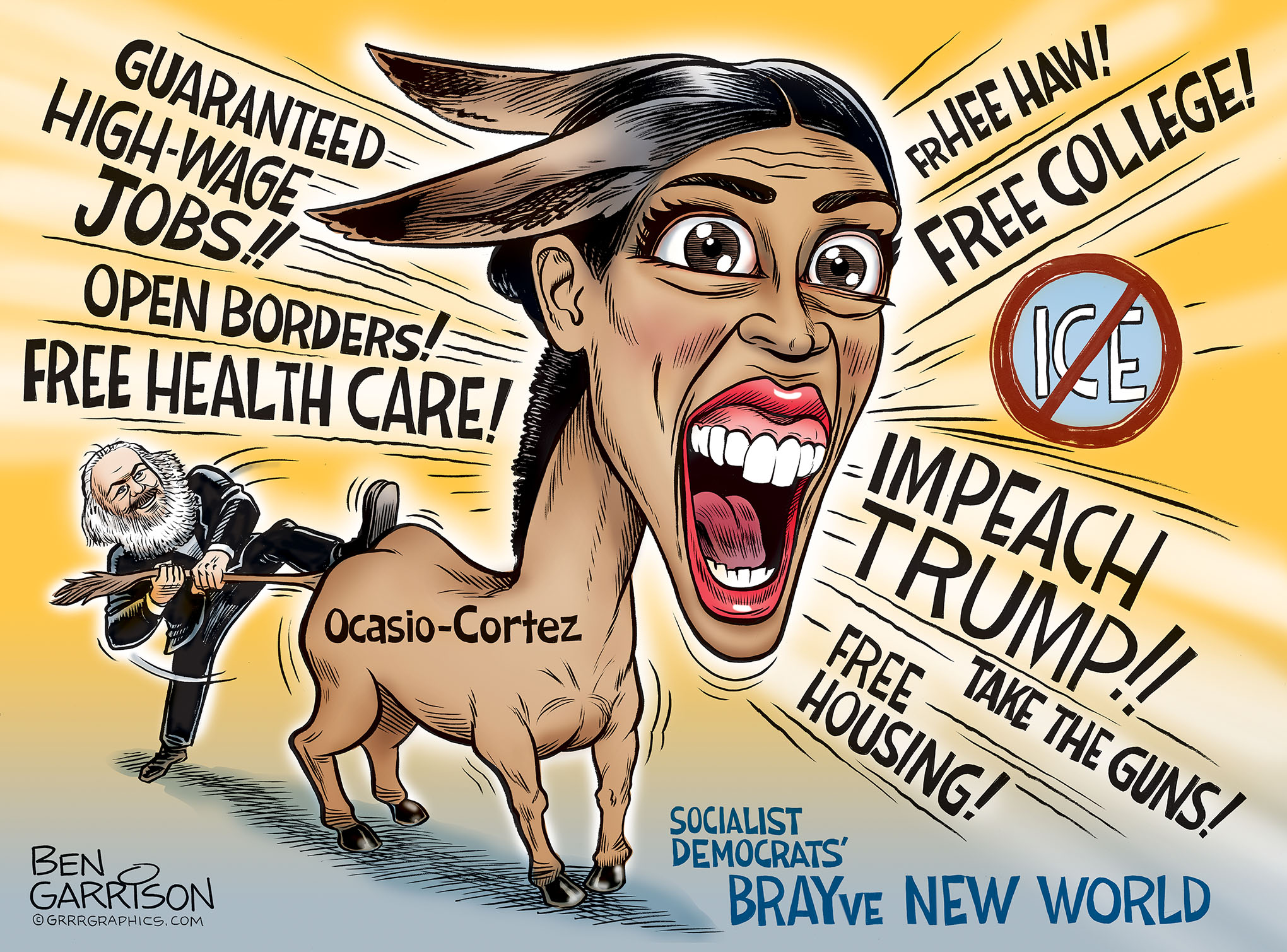 UPDATE JANUARY 16, 2018  Welcome Slate viewers! Have a seat and enjoy the show

Newly-installed Rep. Alexandria Ocasio-Cortez (D-NY) is calling for 70% taxation on the wealthy as a way to pay for her “Green New Deal,” which proposes to use government to create new jobs by investing in renewable energy.

In an interview set to air Sunday on CBS News’ 60 Minutes, Ocasio-Cortez — who has begun referring to herself by the nickname, “AOC” — told Anderson Cooper that the “Green New Deal” would “require a lot of rapid change that we don’t even conceive as possible right now,” including raising taxes to a marginal rate of 70%, as in the 1960s.

Alexandria Ocasio-Cortez presents a fresh face to the case for socialism.

She’s young and perky. She calls herself a ‘democratic socialist.’ She represents the current direction of the Democrat Party. It’s the wrong direction. No matter what modifier is added, socialism is always a disaster.

First of all, we’re a republic, not a democracy.

Michael Moore claimed President Trump is illegitimate because he did not win the popular vote. (He would have won that too had Hillary not cheated with the millions of illegals who voted for her). What really counts is the electoral vote. Moore wants to get rid of it, but since he can’t he instead foolishly pretends the Electoral College doesn’t exist.

He must know it serves to protect us from the mob and naked democracy. The mob always votes for ‘free stuff’’ at the expense of individual rights. Also, we are the United States, not the contiguous blob of Washington D.C. The states need to have some say and semblance of independence. Otherwise the masses in the cities will decide every time. We know they are too easily brainwashed by tyrants and demagogues such as Moore. President Trump was lawfully elected by the states and that sticks in Moore’s pendulous craw.

Like Obama, Ocasio-Cortez came out of nowhere to snag a seat in Congress. Her promise of ‘free stuff’ may sound new and exciting, but it will bring the same result it has always has—poverty. The quality of ‘free stuff’ is always inferior. Since socialism breaks the link between effort and reward, less effort will be put into institutions such as free college, free housing, and free health care. In the movie ‘Starship Troopers,’ Lieutenant Rasczak summed it up nicely when he stated, “Something given has no value!” The best things in life are not free. When people have a vested interest in what they produce, they do a better job and we get better quality education, products and care. Guarantee them jobs and good pay? Well, that already happened in Cuba. The end result there was the people pretended to work and the government pretended to pay them.

The callow Cortez also wants to address ‘climate change,’ confiscate our guns, and eliminate border control. An open border combined with the promise of free stuff to all is a recipe for disaster.

As Milton Friedman used to say, “There’s no such thing as a free lunch.”

Progressives and socialists must understand this, but they remain stubbornly obtuse. They want to punish those who work hard while rewarding indolence and mediocrity because they long for ‘equality,’ even though it’s clear that all humans are inherently unequal. The lefties also tend to be against Christianity because they have problems with such ‘patriarchy.’ By means of their magic free stuff, socialists want to solve everyone’s problems–not just in the USA, but also all over the world. They are addicted to virtue signaling.

Many of them don’t believe in God because they’d rather pretend to be Him. When that doesn’t work they resort to worshipping their beloved leviathan known as omniscient Big Government, which they think can bring about Heaven on Earth.

Instead of utopia, such egalitarianism leads to Hell on Earth. Even if it comes in the form of a fresh young face sporting a beaming smile, socialism remains a very ugly prospect. 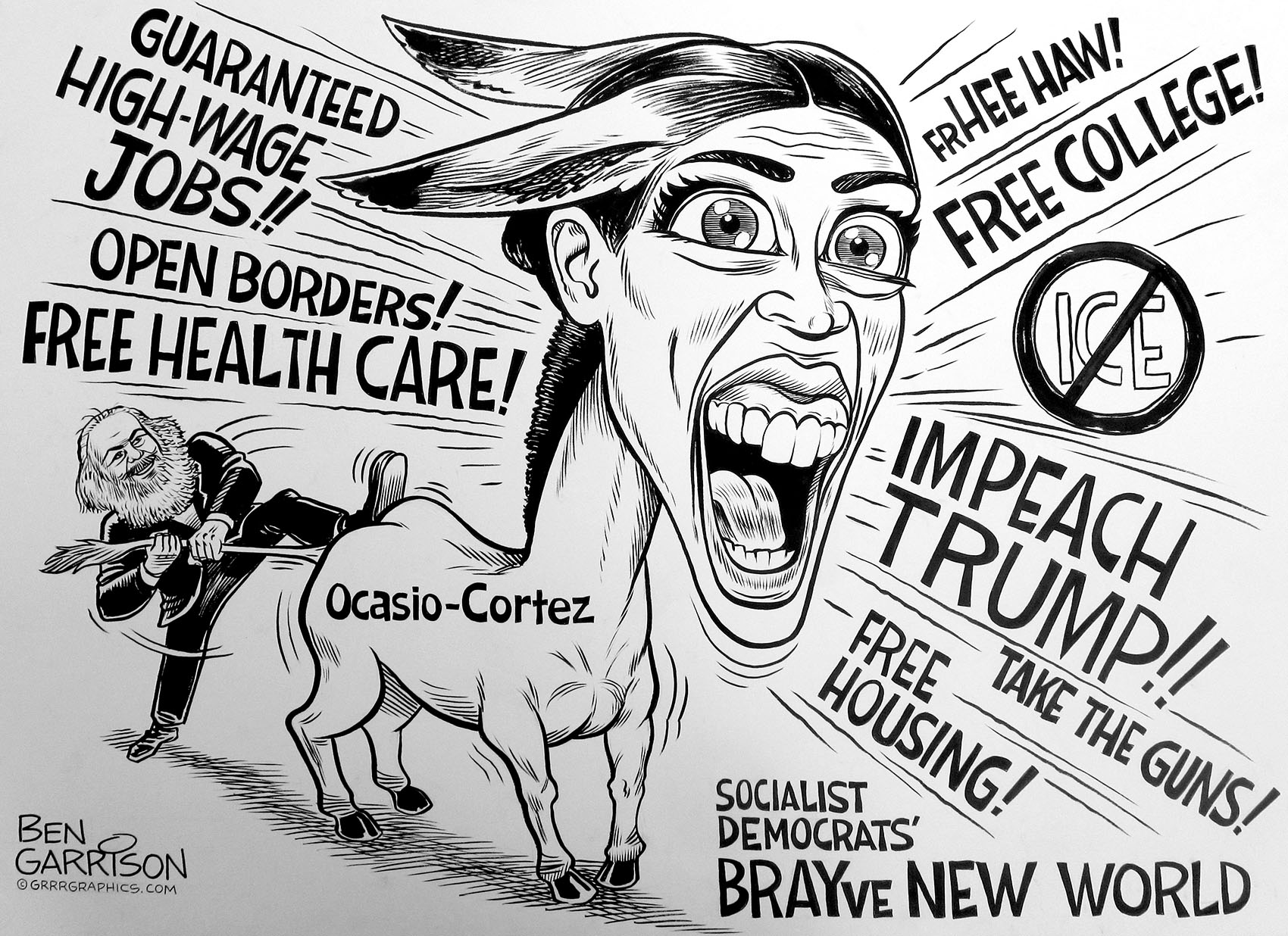