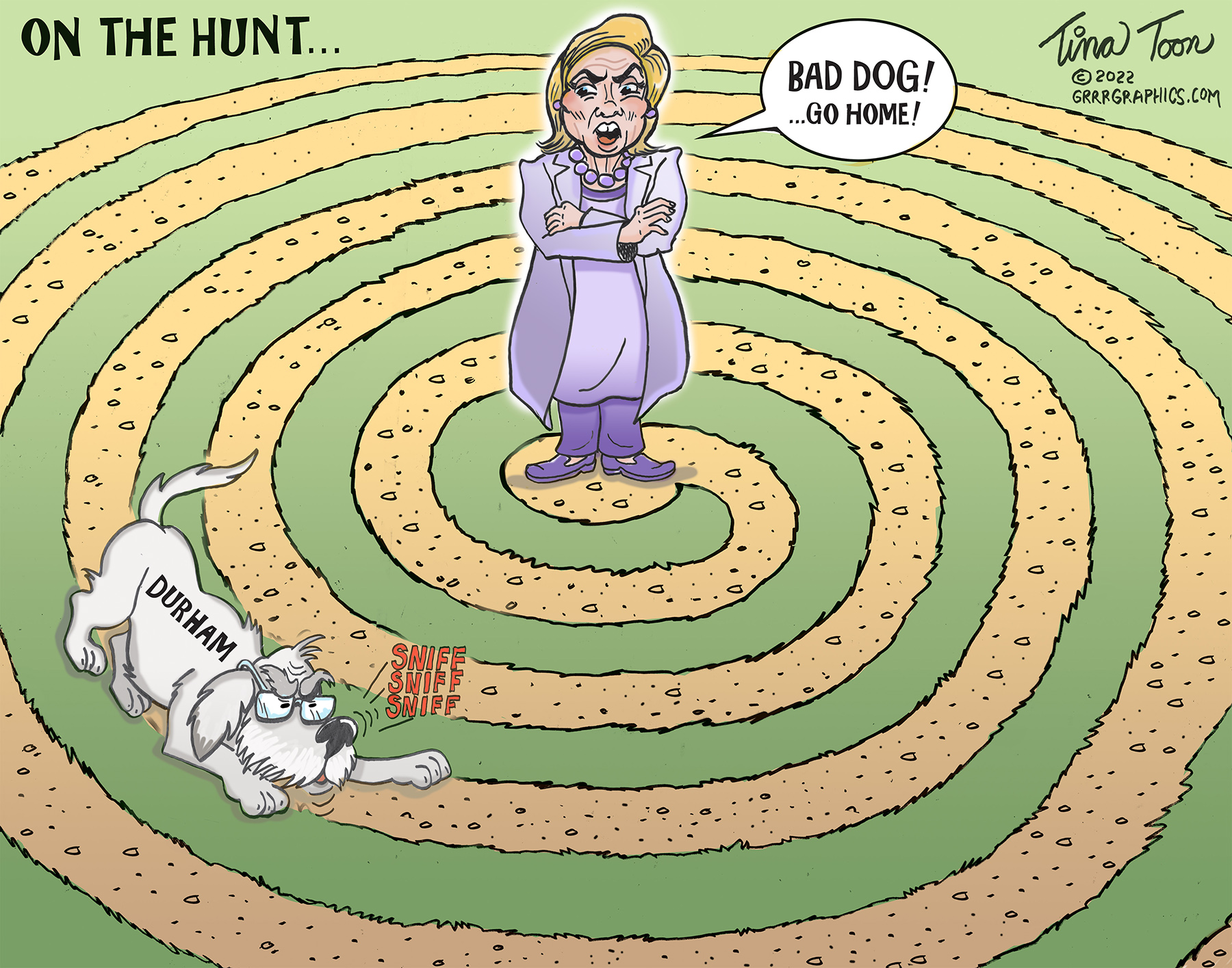 Special Prosecutor Durham is sniffing out the evidence. He’s on the hunt and the trail leads to Hillary Clinton.Hillary Clinton should be nervous, but perhaps she’s not. After all, the Deep State Swamp has had her back for years.Remember this is only one indictment and one trial. There could and should be more to come.  Durham and his team have been slowly circling and gathering evidence. They’ve been methodically building their case. The wheels of justice are slow in turning, but this case must be foolproof and legally sound. There can be no mistakes with the likes of Hillary. The evidence has been found along a winding, crooked path, but we can finally see that it is leading to crooked Hillary Clinton.

Help GrrrGraphics Cartoons reach more people- Share our newsletter link with your ULTRA MAGA friends- sign up today for great cartoons and more delivered to your inbox! Click To ShareThe Michael Sussmann trial is reveling some eye-opening evidence.  The flash drives that Sussmann and Joffe put the bogus Alfa Bank Trump server data on were purchased by Sussmann himself at a DC Staples. Hillary’s aide, a man appropriately named ‘Mook,’ revealed that Hillary gave him the go-ahead to move the Trump/Russia collusion lie into motion. Sussmann told the FBI that he was acting on his own as a concerned citizen when he gave them the concocted ‘evidence’ on the thumb drives. Then Sussmann billed the Clinton campaign for the drives and his time spent with the FBI. Durham has the receipts.

Support ULTRA MAGA Cartoons with a One time donation! Click to Donate!The Clinton machine is starting to fall apart, but the FBI machine that supported her needs to be dismantled as well. Never forget that 50 top agents in our security agencies backed the Russia collusion story, even though they all knew it was a lie. They did it to attack Trump while exonerating Clinton when she egregiously and illegally set up her ‘pay for play’ server in her bathroom.

The Russian collusion hoax cost taxpayers at least $40 million dollars. It cast a cloud over Trump’s presidency. It’s time that cloud rained down on the Deep State Swamp where Hillary and the corrupt security agencies reside. Lock them up!

This Tina Toon is available as a signed print, click to order