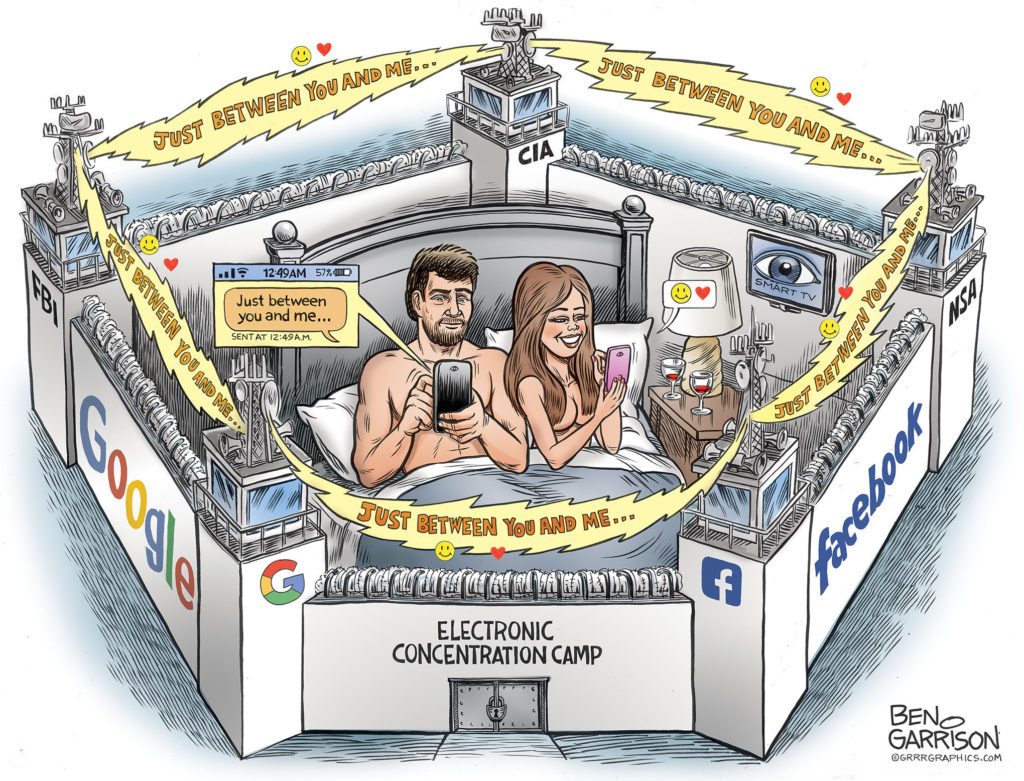 I drew this cartoon as a reminder that privacy is now a thing of the past.

Everything we post online or over the phone can be used to track our whereabouts, sell us things or otherwise be used against us. Edward Snowden risked his life to tell us how intelligence agencies are spying on us without constraint. Their FISA warrants are merely a rubber-stamped formality. They use the ’national security’ excuse as a shield and it forbids us from knowing what they’re doing. Whistleblowers are harassed and jailed. Most politicians are compromised and blackmailed. The Fourth Amendment is dead.

A lot of people still express their indifference and claim they have nothing to hide. Well, our government institutions have a tremendous amount of corruption to hide. They have privacy while We The People are denied it. The Shadow Government and Deep State grow stronger and ever more corrupt as a result.

Social media giants are getting more brazen. Conservative voices are getting shut down unilaterally. The leftists at Silicon Valley and the Shadow Government can’t win the argument so they’re resorting to digital book burning. Mike Adams, “The Health Ranger” was completely kicked off of YouTube for no reason. That must have made Big Pharma happy.

Those running the social media show also object to gun ownership and Bitcoin. So those things are now getting banned on social media. Great Britain is getting a Chinese-style Internet. Those on the political right who are posting what the ‘authorities’ might consider ‘hate speech’ now face long prison terms. France is following suit. I think of all the US soldiers who died in WWII to keep western Europe free.

Zuckerberg, the nerdy billionaire, has no problem with the CIA and others data mining billions of his users on Facebook. Ignore his thin apology. He’s still laughing at what he once called ‘stupid effers.’ He doesn’t care about free speech and neither does the Shadow Government.

Meanwhile, make sure you keep a piece of tape over those computer and smart phone cameras.