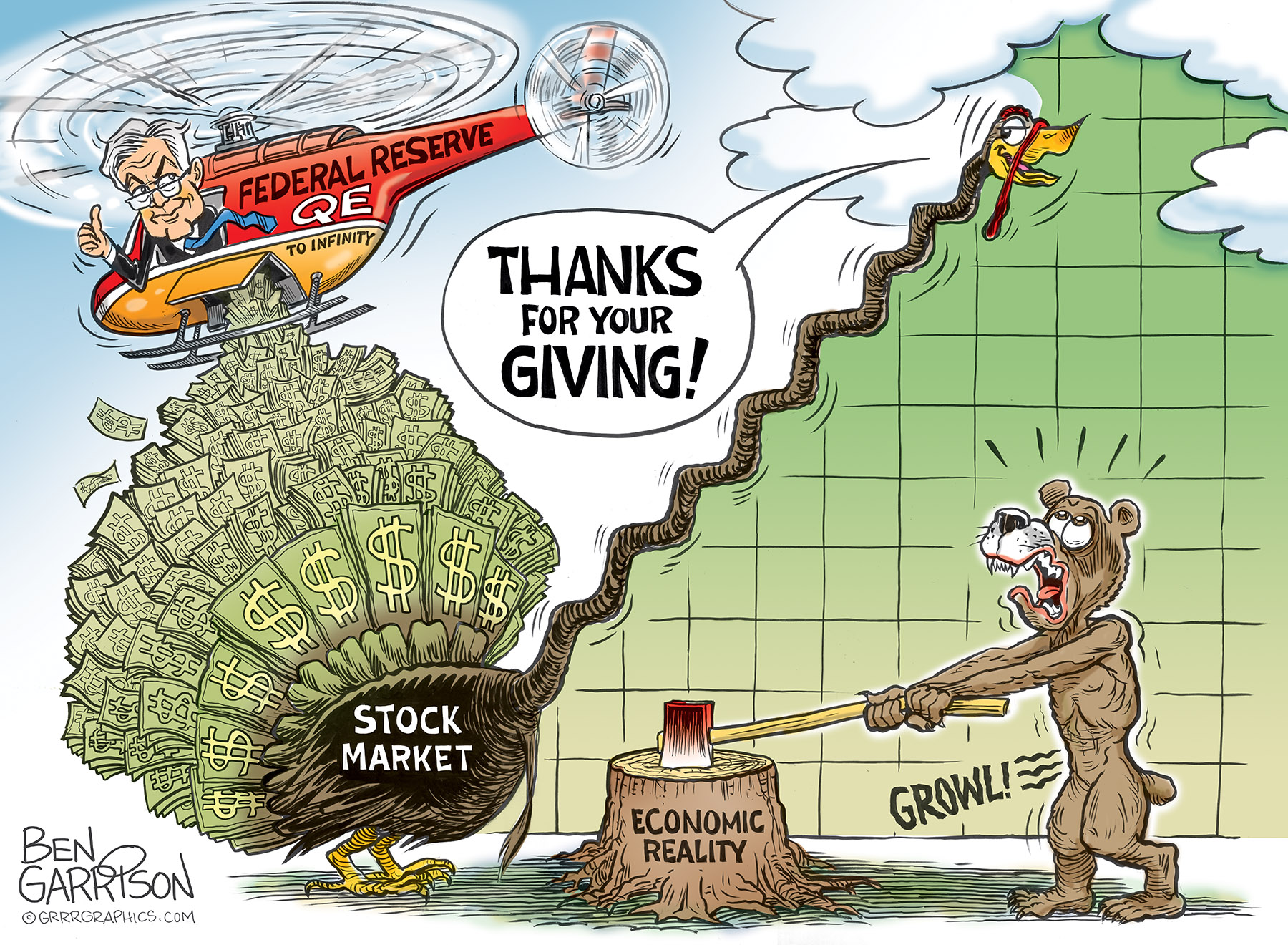 The stock market melt-up continues. Oh sure, it may be going down today, but that would indicate another buying opportunity. Buy the dip! That has worked for the past 10 years. Recessions are a thing of the past. Unemployment is low. The economy is doing great! Buy stocks! BUY BUY BUY! The stock market will not go down through 2020. Trump has ordered the Fed to make it so. We should be glad our president has such influence, but it’s more complicated than that.

I support Trump, but he’s wrong about the stock market has an indicator of economic health. The stock market is in a ridiculous bubble. That’s what the Federal Reserve does—it creates bubbles. The valuations of stocks are way out of whack with what the companies earn.

Too many Americans can’t afford to buy such sky-high stocks anyway. Most Americans are in debt and living paycheck to paycheck. For the first time, the 1 percent now has more money than the entire middle class combined. Not by means of capitalism, but by fascism. They’ve rigged the game in their favor. They have hijacked our government to make sure they will get more. Always more. The middle class is in decline. Real wages are not rising, but they’re paying more in terms of taxes and the hidden tax known as inflation. The millennials can’t pay off their college debt, let alone buy a house and start a family. The corrupt, millionaire politicians made sure those with college debt can’t declare bankruptcy. Housing prices are prohibitively expensive. That means rent goes up, too. One third of the millennials are forced to move back in with their parents. Meanwhile, 84 percent of the stock market is owned by the wealthiest top 10 percent of Americans. The 1 percent owns 38 percent of the stock market.

The ‘too big to fail’ banks have no worries. While most Americans fret about paying bills, the banks get free money from their Federal Reserve, which is there to bail them out to the tune of $150 billion per day if needed. Quantitative easing never ended. The Plunge Protection Team that is the Fed always ensures the market is propped up. It’s a perma-Thanksgiving feast for the central banks. These banker turkeys love to gobble up money. They are stuffed with money. A lot of that money goes into ‘their’ stock market. Martin Armstrong predicted the Dow will hit 40,000 in a few years. Why? Because all that free money has nowhere else to go, so they use it to make the stocks they already own go up even more. The banks aren’t going to give it to us, that’s for sure. We do get stuck with the bill, however. We pay for it via inflation and taxes and the national debt has now exceeded $24 trillion.

The Illuminati won’t spend that money on rebuilding infrastructure such as roads and bridges, but they will use it to buy up utilities and then make sure the electricity gets turned off to make their serfs suffer even more as they usher in their climate change-based ‘globalism.’

Conniving, evil men were allowed to inflict the vile Federal Reserve debt money system upon We The People. Congress unconstitutionally abandoned their mandate to handle our currency. They illegally turned over that power to international bankers. The Illuminati have always been about globalism and control and they’re achieving their goal by controlling our money supply. By this means they buy out everything—the mass media, the politicians, the courts—everything.

It’s time to wake up and END THE FED!