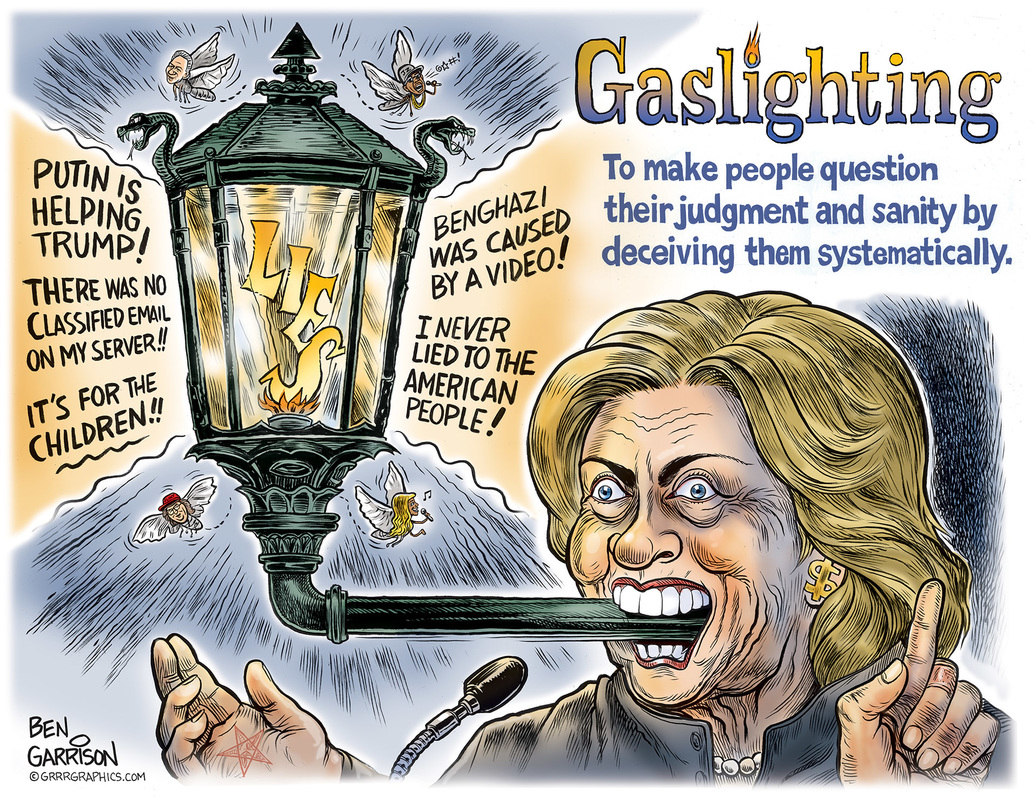 Hillary, like many sociopaths, uses a form of abuse known as ‘gaslighting.’ The word originates from a 1944 film, “Gaslight” starring Ingrid Bergman in which she is tormented by her husband who is trying to make her doubt her own memories. She is made to feel confused and mistaken. She questions her sanity and her ability to remember things correctly.
This is the same tactic Hillary uses. She will lie to our faces and inject ridiculous narratives designed to replace the facts that we know. For example, Russia is to blame for hacking her—forget that this was disproven. She wants us to forget her server was illegal and she and the DNC rigged the primaries against Bernie. The focus moves to boogeyman Russia, whom she complains is backing Trump. Such a lie comes from left field and can be so ridiculous that it’s disconcerting. It knocks people off their center as they began to consider such outrageousness. That’s gas lighting.
During one of the debates Trump told Hillary to her face that he intended to see her prosecuted for her crimes. She responded with a gigantic beaming smile. She’s smiling while being threatened with prison? That’s gaslighting. She hoped such a confident smile would suggest Trump’s threat as a joke—something from a crazy man. Her smile was saying, “Trump is crazy—you can ignore everything he is saying.” Her smile was a form of gas lighting.
When caught in a lie, she quickly fabricate another. She claimed her “personal email” was allowed and used for convenience and it was only on one device. It was later found she had many multiple devices (that she illegally hammered because her yoga emails were private). She said nothing she sent from her illegal server was marked classified. She said ‘there is no classified material.’ When that was proved to be a lie, she said nothing was marked classified ‘at the time.’ She said she was aware of what was and what wasn’t classified, but then lied and said she didn’t know what the “C” in the header meant. Then she said she couldn’t remember being instructed about security due to her concussion. Lie after lie designed to confuse and exasperate. All gas lighting.
She does this for fun and sport. Look at her face during the hearings—she enjoys bamboozling Congress and the American people. It gives her a feeling a power. She doesn’t worry about perjury or prosecution. She knows she is above the law.
Dancing around her flame of lies are celebrities such as Michael Moore and Bill Maher. Both repeat her gaslit lies as if they were obvious truths. Michael Moore, by supporting Hillary, is also giving his support for the 1 percent and fabulously rich elite that he claims to expose. Maher claims Russia wants a ‘coup’ and is using Trump to bring down our Democracy. Really Bill? You sound like a conspiracy nut. Both Moore and Maher are hypocrites and shills for Hillary. JZ and Beyonce were used to attract people to Hillary’s lies. It’s the only way Hillary can get a crowd to show up to hear one of her screeching campaign speeches.
Hillary must not become president. Trump will see to it that this gaslighter faces justice. Lock her up.
—Ben Garrison