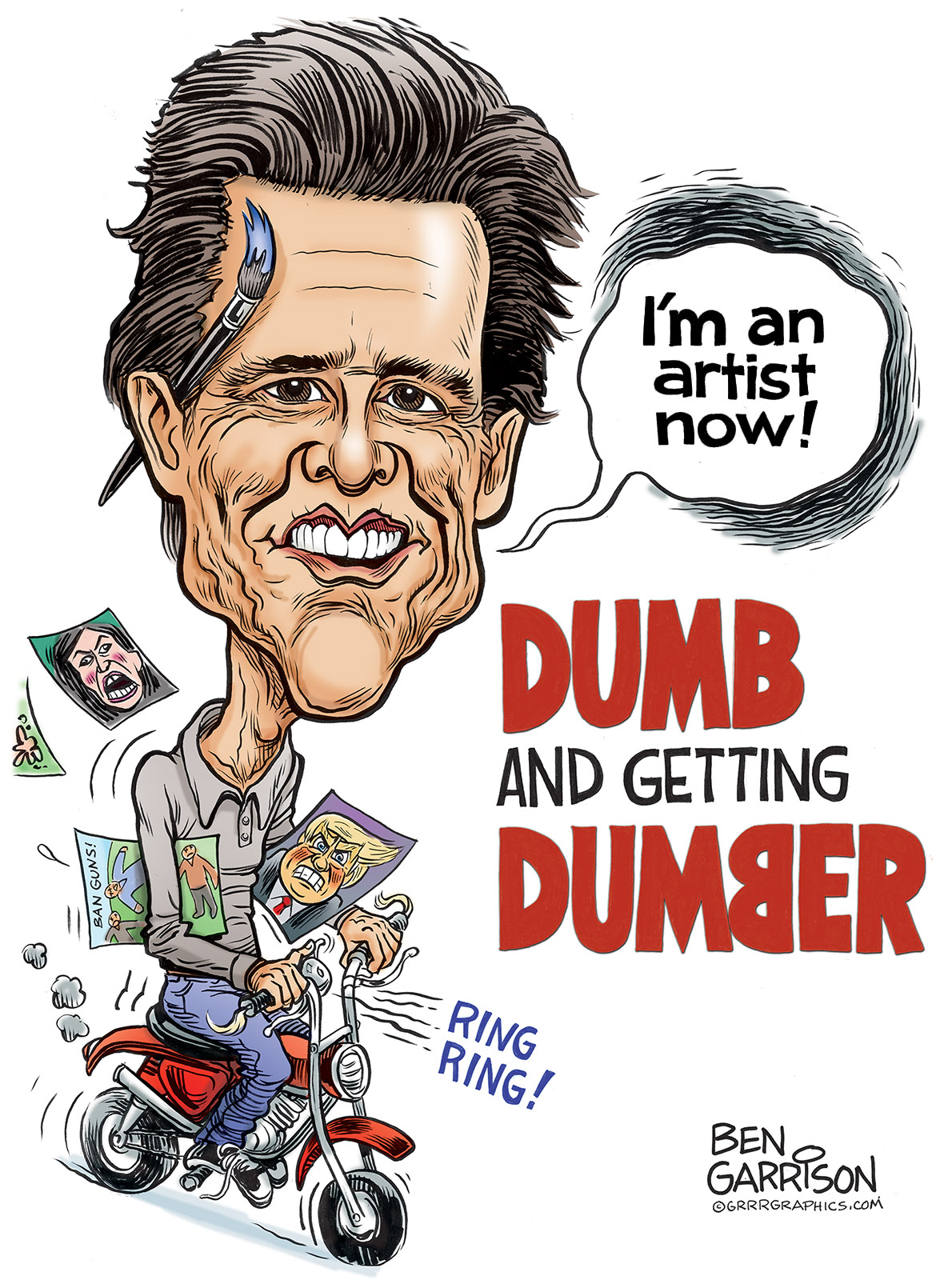 Jim Carrey, Dumb and Getting Dumber

Jim Carrey has spent the last six years working on paintings. His work is currently for sale at galleries located in Hawaii, Nevada and Florida. One critic called his work “astonishingly bad.”

I won’t go that far. Carrey is not without talent, but his work is pretentious and amateurish. It was his movie star fame that enabled him to cut ahead at the front of long line of more experienced artists looking for gallery representation. I can’t help but wonder which fine artist got displaced at those galleries to make room for Carrey, who paints merely for therapeutic reasons.

Now he’s aiming his artistic canon toward politics. His latest cartoon was a ‘monstrous’ portrait of Sarah Huckabee Sanders. A sign of a good political cartoon is its ability to make people angry, and Carrey succeeded. He’s drawn similarly unflattering portraits of President Trump, which have also garnered some attention.

On the other hand, none of it would have achieved much attention if it weren’t for his fame. I’ve been cartooning for nearly 10 years now. I’ve achieved some success only in the past couple of years, thanks to my supporters and my wife Tina, who worked hard to promote my work. Carrey gets a shortcut and that’s fine. He’s also entitled to his free speech, even if many disagree with his apparent Trump-derangement syndrome. The funny man’s protest cartoons aren’t funny. Instead, they’re gaudy, clumsy things designed to shock. That’s fine, too.

Cartoons can be effective without being funny.

Carrey starred in the popular film, “Man in the Moon,” in which he claimed he was psychically taken over by Andy Kaufman. Carrey said the role made him ‘psychotic’ at times. Carrey then had a very troubled relationship with a former makeup artist named Cathriona White, which ended with her suicide in 2015. She claimed Carrey ruined her life by introducing her to drugs as well as giving her sexually transmitted diseases. Carrey has denied this. A wrongful death suit against Carrey was dismissed earlier this year.

Carrey was a rubber-faced comedian much beloved by millions. His face has now deflated into a mass of wrinkled sadness. He’s not funny any more, but that didn’t stop me from drawing him. Consider it payback for dumbing down fine art and your even dumber political cartoons.