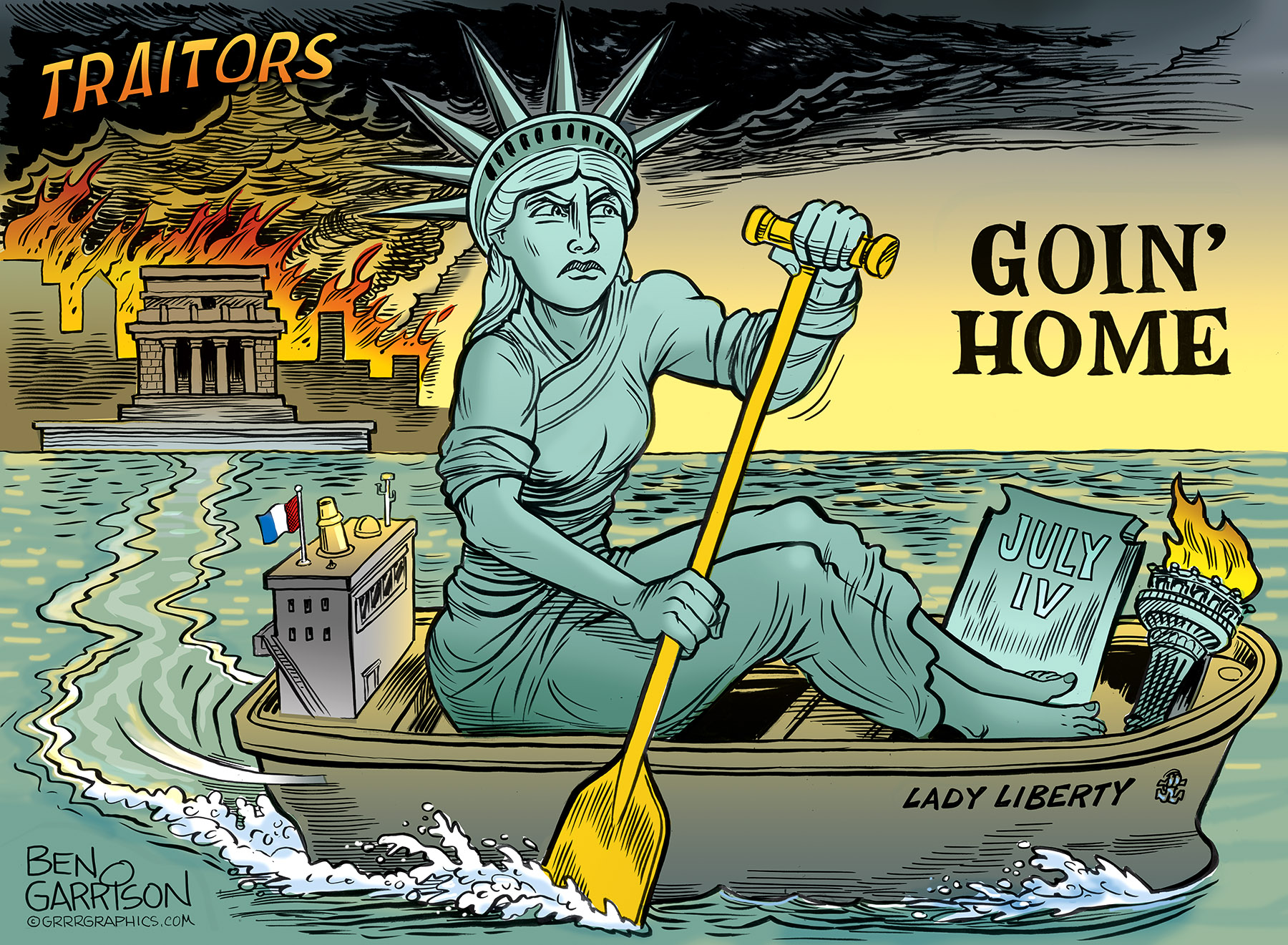 Heading Back To France

Upon taking the Office of President, Barack Obama stated he wanted to “…fundamentally transform the United States of America.” Yet America did not want or require such a fundamental transformation.

We have had a Constitution, a Bill of Rights, and a balance of power. It all seemed to be working out fine for the most part. Why fundamentally transform it? What Obama meant was transforming our Republic into a socialist hell hole. Being a red-diaper baby from the start, socialism was too ingrained into Barry’s brain. He wanted to destroy America and ‘build it back better,’ meaning transferring power from the American people over to globalist oligarchs such as Klaus Schwab, who want socialist system for us in order to make us poor and dependent on them. Barack Obama is a traitor.

Hillary Clinton said she took her orders from the Council of Foreign Relations. We know she also marches in lockstep with the WEF and Bilderberg. Hillary Clinton did not care about the voters. She cared about her unelected masters. Hillary is a traitor.

The traitorous cadaver in chief known as Joe Biden is carrying on Barack’s so-called ‘transformation’ and he’s making up for lost time. After all, President Trump did his best to make America great again, which meant time lost for the globalists and their agenda. Biden is corrupt to his core (if he has one), but he also again showed he was a shameless traitor by sending nearly a million barrels from our Strategic Oil Reserve to an energy company in China run by the communists. Joe’s crackhead criminal son, Hunter, made a deal worth millions with that very same company. Why is Joe sending oil to our enemy rather than to Americans? Why are the Democrats sending endless billions of taxpayer money to fight an endless war in Ukraine—that holds no strategic interest to the United States? Why protect Ukrainian borders while leaving our own wide open? They do it because they’re traitors. And it’s not just the Democrats. The warmongering RINO Republicans are traitors, too.

Anything bad for America is good in the eyes of the traitors. They want to destroy families and replace them with gender confusion. They want to destroy American culture and history and replace it with ‘woke-ism.’ They’re kicking men out of the military simply because they don’t want to take a potentially deadly experimental vaccine that does nothing to stop an ever-morphing virus. Woke generals are allowing ‘trans’ soldiers in the military, which weakens morale. A trans Marine with net stockings, lipstick, and high heels. A man identifying with a woman. They should be identifying as a soldier and part of a fighting unit. General Milley made an unauthorized phone call to his Chinese counterpart and trashed President Trump. He’s a traitor. Obama made sure many in the senior leadership of our military were traitors and willing to fire on the American people if need be.

Soros has helped put in office many district attorneys who permit crime to run rampant in our big cities. We already knew Soros was a traitor, but getting rid of police is part of weakening America. It’s traitorous.

Those politicians who want to destroy our free speech, our right to own firearms, and our right to due process—they are all traitors. Nancy Pelosi is a traitor for locking up the January 6 protestors. The FBI are traitors for hiring men such as Ray Epps to encourage the march on the Capitol. The protestors was outraged that traitors stole a presidential election outright. Look for the those traitors to repeat the process. Nobody seems to be able to stop the socialist takeover.

Most of our media are traitors. They do no real journalism. They merely repeat talking points given to them by a traitorous CIA.

The biggest traitor may have been Woodrow Wilson for allowing private bankers who called themselves the Federal Reserve to gain a death grip on our dollar. Congress was complicit in this traitorous act by unconstitutionally handing their power to regulate money over to the globalist bankers. We’re now paying for such traitorous folly with massive inflation. Soon we will have to deal with a digital dollar tied to a social credit score system. Say the wrong thing on social media and your bank account could be frozen.

I can go on and on and I already have, but the traitors won’t be happy until whatever power and rights ‘We The People’ have left are completely transferred over to a handful of wicked men at the top of the globalist pyramid. We are already a Banana Republic. The people are fearful—yellow. The traitors are going to peel us.

Perhaps only Trump can fix this problem. Will he run in 2024?  This special Trump original is now 50% off. Please consider this offer and help fight the destruction of America! See the original cartoon below…